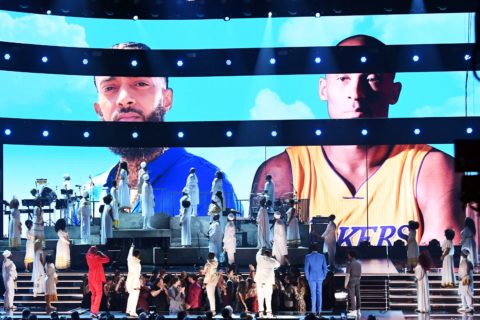 Photo by Kevin Winter/Getty Images for The Recording Academy
Celebrity

“We’re Standing in the House That Kobe Built”: Celebrities Lead Tributes to Kobe Bryant at the 2020 Grammy Awards

It was an emotional night.

The 2020 Grammy Awards are officially underway in Los Angeles. And although the night is usually one for unbridled celebration, tonight’s ceremony is unfolding under different circumstances following today’s news that basketball legend Kobe Bryant had died in a helicopter crash, alongside his 13-year old daughter Gianna. The awards are being held in the Staples Centre in Los Angeles, which so many stars on the red carpet referred to as “Kobe’s house”, so it’s fitting that the industry is paying tribute to the iconic player.

See some of the most touching tributes to Kobe Bryant from tonight’s ceremony:

“We are literally standing here heartbroken in the house that Kobe Bryant built.” Host @aliciakeys pays tribute to Kobe Bryant, his daughter and their family during her opening monologue at the #Grammys https://t.co/0BNpfw9wWV pic.twitter.com/9VzWZa2M8S

“We love you Kobe.” @aliciakeys and Boyz II Men sing in tribute to Kobe Bryant and his family at the opening of the #Grammys https://t.co/kk0nIau0ee pic.twitter.com/v3KpXSkvyW

Lizzo begins her opener by saying “Tonight is for Kobe”

Lizzo kicks off the #GRAMMYs by dedicating the night to the memory of Kobe Bryant pic.twitter.com/xUht1o1h5L

.@OfficialRunDMC holds up a Kobe Bryant jersey to pay tribute to the @Lakers legend during their performance with @Aerosmith. #GRAMMYs @RecordingAcad pic.twitter.com/hHhNcVG3Nh

John Legend, DJ Khaled and more end their Nipsey Hussle #GRAMMYs tribute with an image of Kobe Bryant next to Nip pic.twitter.com/0l4STVoRcY

And ICYMI, Priyanka Chopra’s subtle nail tribute to the legendary #24

Stars are keeping Kobe Bryant top of mind at the #Grammys tonight—in ways both big and small. https://t.co/q7DcWvhNsY pic.twitter.com/RYTJWVB60J

Photo by Kevin Winter/Getty Images for The Recording Academy
Get the best of FASHION in your inbox Thanks for signing up!
The latest fashion, beauty and celeb news delivered right to your email #FASHIONforall Now, check your inbox to complete your subscription
We won’t ever use your email address for anything else
Want even more FASHION? Follow us on social media.