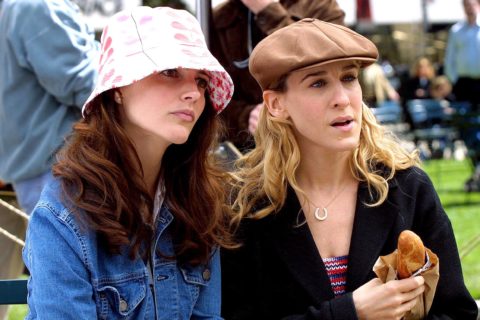 Are you a Carrie or a Miranda? A Charlotte or a Samantha? You can’t be a bit of both, and you definitely can’t be none of the above, because every woman falls into one of the following four categories: brainy, conservative, promiscuous, or shoe-loving.

At a time when women are fighting hard to break down gender boundaries, it seems pretty absurd to force ourselves into these narrow labels. And yet, we’re obsessed with it: we love comparing ourselves to the fun-loving ladies of Sex and the City. These characters continue to be iconic 13 years after the series’ final episode, and they continue to be the #1 thing female friend groups identify themselves with. (I’ve taken multiple online quizzes over cosmos and pizza, and no matter how hard I try to skew the results, I’m always a Miranda.)

And because *celebrities are just like us*, Kim Kardashian has a SATC character that she’s “always been.” The Internet-breaking-reality-TV star revealed her answer on Ellen DeGeneres’ new YouTube series, Ellen’s Show Me More Show, when the host put Kardashian in the “hot seat” to answer her “burning questions.”

“Which Sex and the City character are you?” Ellen’s teleprompter asks.

“I’ve always been such a Charlotte,” Kim replies, in a very Kim way. “She’s kind of conservative and whatever. I know you guys would never believe that, but I swear in high school at least I was.”

Hmmmm. Yeah, IDK if I do believe that, Kimmy. Kardashain — whose family empire started with a sex tape — is best known for her nude photos, killer business skills and Kimoji merch line of butts, middle fingers and weed paraphernalia. The Kardashians are a magnet for controversy, and Kim isn’t one to avoid an edgy (but tasteful!) photo-op. Charlotte, on the other hand, is best known for being a take-no-risk traditionalist, who is optimistic, albeit a bit naive. She’s always judging the sexually-liberal Samantha, and she believes whole-heartedly in true love.

Is Kim a bit like Charlotte? Sure. The two both have families of four, which they started with their second husbands. They both come from families of privilege and generally stick to drug-free, party-free, good-girl lifestyles. And they both have brown hair…so yeah, there’s that.

But does that make her “A Charlotte”? Probably not. Either way, I secretly hope that in Sex in the City 3, (which BETTER be happening), Carrie, Miranda, Charlotte and Samantha sit around over cosmos comparing themselves to the Kardashian klan. I can already picture Charlotte screaming out: “I’m nothing like any of those girls!”

Photography by Tom Kingston/WireImage
Get the best of FASHION in your inbox Thanks for signing up!
The latest fashion, beauty and celeb news delivered right to your email #FASHIONforall Now, check your inbox to complete your subscription
We won’t ever use your email address for anything else
Want even more FASHION? Follow us on social media.