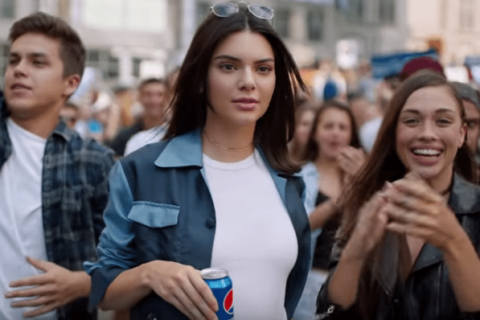 This Is Why Kendall Jenner’s New Pepsi Commercial is Problematic

Spontaneity! Unity! Kendall Jenner! All packaged together with a pretty bow to reflect today’s turbulent political climate. What could possibly go wrong?

Apparently a lot, Pepsi is now learning. The soda company is experiencing mass backlash after releasing, what they call, “a short film about the moments when we decide to let go, choose to act, follow our passion and nothing holds us back.”

The 2-minute commercial shows a diverse group of well-dressed millennials engaging in what looks like a super fun and peaceful protest for an unknown cause. The lively group walks by a bewigged, blonde, and beautiful Kendall Jenner, who is posing for a photo shoot nearby. The supermodel catches a glimpse of the protestors mid-shoot and decides to join. She whips off her wig, smudges off her dark lipstick, joins the crowd, grabs a can of Pepsi, and hands it to a police officer. The crowd cheers, and everyone is happy. End scene.

pepsi you need this disclaimer pic.twitter.com/x8XmT59Vpf

i get it now. if black lives matter protesters would've handed a pepsi to the cops they wouldnt of gotten tear gassed. it's so clear now.

Except not really. In reality, nobody seems to be happy about Pepsi performing a political protest with the goal of increased profit. Conservatives are angry Pepsi is “supporting” Black Lives Matter, and liberals are critical of the ad for trivializing the movement’s importance. There’s whole idea of using a privileged, white model and a soft drink sold by a massive corporate conglomerate to create peace between activists and law enforcement also isn’t really adding up for people.

Either way, Pepsi is co-opting a movement of political resistance. Implying that a can of Pepsi can unite protestors and police isn’t just a stretch: It’s insulting to those who have lost their lives to police brutality. Protests aren’t just about peace and unity, they’re about fighting for justice.

In a statement provided to Teen Vogue, an official spokesperson for Pepsi explained: “The creative showcases a moment of unity, and a point where multiple storylines converge in the final advert. It depicts various groups of people embracing a spontaneous moment, and showcasing Pepsi’s brand rallying cry to ‘Live For Now,’ in an exploration of what that truly means to live life unbounded, unfiltered and uninhibited.”

Jenner hasn’t spoken out about her role in the advertisement just yet, but we’re anxious to hear what she has to say.