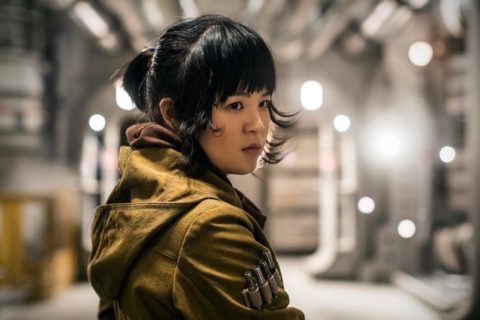 "Their words reinforced a narrative I had heard my whole life: that I was 'other,' that I didn't belong, that I wasn't good enough, simply because I wasn't like them."

Nothing shoots an actor into the spotlight like a starring role in a blockbuster franchise film. And nobody knows this more than Kelly Marie Tran, whose big break in last year’s Star Wars: The Last Jedi should have been reminiscent of a Cinderella story—but instead, seemed like a Hollywood fairytale that wasn’t going to have a happy ending. On press tours, Tran admitted to being nervous about handling her newfound fame, but tried her best to navigate the difficult world of social media, regularly posting BTS photos and inspirational mantras, taking her followers along for the ride of her exciting journey. However, no amount of optimism or goodwill could prevent her from experiencing the negative pitfalls of fame.

Diehard Star Wars fans (if you can even call them fans) weren’t ready to accept Tran, who played resistance fighter Rose Tico, due to her being female and the first Asian-American to have a leading role in the franchise. Her Wikipedia page received horrifying edits, with offensive slurs against her Vietnamese background, and Paul Ray Ramsey, a popular Internet personality, made crude remarks about her appearance, sparking a racial wildfire on Twitter with many joining in on the mockery. And, as you may recall, is wasn’t the first time that Star Wars trolls showcased their misogynistic ideologies against actresses in the series. Daisy Ridley, one of Tran’s co-stars, was also on the receiving end of online abuse, which led to her deleting her Instagram account in 2017. She has yet to make a return.

Two months after leaving social media—and having her name spread across headlines for doing so—Tran has penned an op-ed for New York Times explaining her decision. In the piece, titled “I Won’t Be Marginalized by Online Harassment,” the Star Wars actress addresses facing prejudice in childhood, Hollywood and at the hands of a toxic fandom.

“[The fans’] words seemed to confirm what growing up as a woman and a person of colour already taught me: that I belonged in margins and spaces, valid only as a minor character in their lives and stories,” wrote Tran. “And those words awakened something deep inside me — a feeling I thought I had grown out of.”

She goes on to explain how she stopped speaking Vietnamese as a child to avoid being bullied, and how society has continued to reinforce the idea that she could never be a hero—she could only be a supporting character. The Star Wars harassment cut deep.

“Their words reinforced a narrative I had heard my whole life: that I was “other,” that I didn’t belong, that I wasn’t good enough, simply because I wasn’t like them,” Tran wrote. “And that feeling, I realize now, was, and is, shame, a shame for the things that made me different, a shame for the culture from which I came from. And to me, the most disappointing thing was that I felt it at all.”

“For months,” she continued, directly referencing the post-Star Wars bullying she faced, “I went down a spiral of self-hate, into the darkest recesses of my mind, places where I tore myself apart, where I put their words above my own self-worth.”

Now, Tran is pledging to make a to use her position to make a difference. She concluded the essay by sharing her birth name, Loan, wit readers and declaring that she’s “just getting started.”