Keeping Up With Kanye: 7 Reasons West is Making Headlines

Most Tuesdays, you’d be smart to put your money on a Kardashian name dominating the news cycle. Whether theyr’re drinking cereal with milk or being accused of cultural appropriation, chances are they’ve done something to spark a reaction and outrage the Internet. But today, Calabasas is taking the back seat to Chicago—because the Kardashians are handing over their crystal-encrusted controversy crowns over to Kanye West.

West has had a busy week. But you probably already knew that, even if you weren’t keeping up. There was a name change, an emoji explanation, a Perrier costume, a Trump hat, a Trump rant, a Trump tweet and a 30-minute TMZ video that attempts to clarify the whole situation. It’s a lot. So let’s jump in, break it down, and watch it all go wrong.

“Rapper changes his name to Ye”

Hear ye, hear ye! Following in the long line of rappers with fluid names—hey, did you know Sean Combs, Puff Daddy, Puffy, P Diddy and Brother Love are all the same dude?—Kanye West announced on Twitter that he’s given himself a shiny new moniker. The being formerly known as Kanye West, will now be called “Ye.”

the being formally known as Kanye West

“We’re releasing Yandhi Saturday night,” West tweeted last Thursday, ahead of his Saturday Night Live performance. “We know it will come in number 2 to my brother Lil Wayne and that’s lovely. The universe needs Ye and Wayne music at the same time.” West is, of course, referring to his ninth studio album and Lil Wayne’s long-awaited Tha Carter V, which after years on the shelf was released on September 27th. Wait, is Kanye West putting aside his ego for the good of music culture? Something seems off…

The universe needs Ye and Wayne music at the same time

SNL came and went—more on that soon—and Yandhi was nowhere to be seen, no matter how many times you refreshed your Spotify page. Two days and no news later, West’s wife tweeted an emoji explanation.

A crown? A video camera? An electrical plug? I’m not even going to try to decode what this means. After the tweet, Kanye West told TMZ that he “didn’t finish” the album in time and had accepted a member of his management’s suggestion to push the release to November 23. He also said he has to go “to what is known as Africa” to finish the recording.

Kanye West performed three songs as part of his Saturday Night Live performance, starting with his most recent single, “I Love It.” Lil Pump, who’s featured on the track, took to the stage dressed as a thirst-quenching Fiji water bottle. West was dressed as Perrier. Which meant we got this: 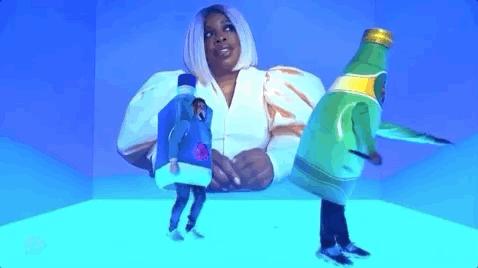 But more importantly, we got this:

As you probably gathered from the headline, this is where things start going really wrong. After closing off Saturday Night Live with performances of “Ghost Town” and the never-before-heard “We Got Love,” Kanye West grabbed his flat-brim MAGA hat and addressed the studio audience. NBC cut the public broadcast short, but Chris Rock managed to capture the speech and share it to his Instagram stories.

“So many times I’ve talked to a white person about this, and he’d say, ‘How could you love Trump? He’s racist.’ Well, if I was concerned about racism I would have moved out of America a long time ago,” West said on stage. “They bully me. They bully me backstage not to put my hat on. They bully me.”

Keenan Thompson, the longest-running cast member of the sketch comedy series, told Seth Meyers that the whole thing was a “circus,” saying that “we’re all entitled to our opinion. I don’t know if that’s the moment, necessarily, to hold people hostage like that, but hey…”

“Kanye West Calls for Abolition of the 13th Amendment”

Wearing his signature cap, West tweeted out a photo from an unidentified private jet with the caption: “this represents good and America becoming whole again.  We will no longer outsource to other countries. We build factories here in America and create jobs.  We will provide jobs for all who are free from prisons as we abolish the 13th amendment. Message sent with love.”

this represents good and America becoming whole again.  We will no longer outsource to other countries. We build factories here in America and create jobs.  We will provide jobs for all who are free from prisons as we abolish the 13th amendment. Message sent with love pic.twitter.com/a15WqI8zgu

In case you need a little brushing up on your U.S. history, the 13th Amendment, which abolished slavery in America, states that “neither slavery nor involuntary servitude, except as a punishment for crime whereof the party shall have been duly convicted, shall exist within the United States”. This specific amendment to the constitution was made on December 6, 1865, and brought an end to the Civil War.

Let’s just go ahead and do this in point form:

To further clarify his statements about slavery, West appeared on a show widely known for its clarity: TMZ. “Abolish was the wrong language,” he said. “I misspoke by saying abolish. Amend is the right language.” West and Harvey Levin then ramble on for 30-ish minutes about Donald Trump and politics. It would be cruel to force anyone to watch that, so here’s a condensed clip.