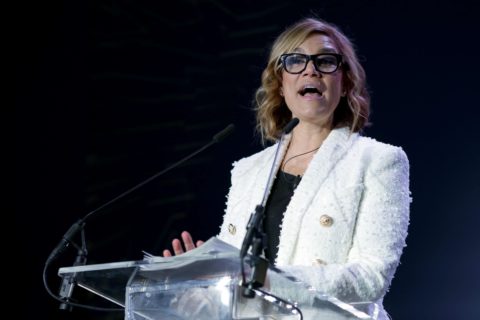 SoulCycle Co-Founder Julie Rice Can Pretty Much Predict the Future

Julie Rice is really good at looking ahead. It’s what makes her one of the most important entrepreneurs of the past decade, and the perfect person to take on a partner position in the global co-working space, WeWork. She predicted the success of SoulCycle—and then built the brand and sold it for $90 million USD—and now, she’s predicting what cities will look like a decade into the future. But before we talk about where she’s going, let’s take a look back at where she started.

Before WeWork, before SoulCycle, what did your career look like?

WeWork is like my third career. Before this, I was the co-founder of SoulCycle. Before that, I actually worked in Los Angeles in the entertainment business for 20 years. I was a manager for actors, so I would find talent in New York and help them grow their careers, I would have them ultimately move to Los Angeles where we would, you know, turn them into giant megastars.

I worked on teams with Ellen Pompeo, Selma Blair, Jenifer Lopez and Justin Long. Not all of them I discovered, many of them I did. When I look at my career, whether I’m managing actors in the movie business to selecting entrepreneurs whose products will go into WeWork’s WeMRKT, I think the real thread is that I’m really inspired by people that have passions, ideas, and creativity, and really sort of cultivating and empowering people to fulfill those dreams and help create a platform for people to launch their talent.

When you left that business to start SoulCycle, how did people react?

Everybody thought it was a crazy idea. I couldn’t get my husband on a bike for almost the first 3 years of the business. I have really close girlfriends who are always like, “I should have invested!” And I’m like, “invested?! You wouldn’t even come!” Everybody questioned how I could quit a pretty successful career in the movie business to do this.

So what you’re telling me is that you can pretty much predict the future, whether it’s A-list actors or a mega fitness trend.

One thing that I do love is trends. I love pop-culture. I love really tuning into the way the world is moving and what people want next—and I think that is something that I’ve always been in tune with.

Are there any trends you could see blowing up in 2019?

Have you seen any of these new Netflix rom-coms targeted at teens?

Yes, everyone’s obsessed. I think that this whole revival of the Breakfast Club-era and romcom for kids and all ages is a very interesting space.

I think we’re ready for the reinvention of streetwear. We’re seeing it already, with the way people are mixing sneakers with couture.

WeMRKT, WeWork’s new retail concept, is something else that we’ll see popping up here in Canada in 2019. Can you tell me a little about that?

As you probably know, physical retail locations are disappearing. So we have two sort of objectives for this market. The first objective is to give the WeWork members who are making things a point of distribution. More and more stores are going away, but we have 500 buildings going up next year. So if I can put the best energy gummy bears, the coolest office supplies, and all of the things that our members need during the day, into 500 distribution points, then that’s another great thing that WeWork can do for its members.

Now on the flip side, our members will save having to go out of their way to buy a pen or a phone charger or whatever it is they need. So the question now is, what can we put in these buildings that can create a more productive, more inspiring, healthier place for our members? We’re curating it into about five categories: healthy snacks, lifestyle, tech, office supply, and then gifts/novelties.

It sounds like WeWork is trying to completely streamline people’s lives.

We recently launched our first school in New York, WeGrow, where we have 46 kids enrolled between the ages of three and nine. And then there’s also WeLive in New York, which are our furnished, flexible, co-living apartments.

So the whole thing is trying to predict what people are going to need a year or two from now, which is what you’re so great at!

Our CEO Adam Neumann, is also great at it. He really thinks about what the future cities are going to look like. With WeWork, we look at how people want to live in the world these days. With millennials really loving experiences and with people having this new ambition to do what they love rather than just make money—what does a world like that look like? Do people want to be global citizens? Do they want to own homes? Or do they want to own a suitcase and wheel it around the world? So he spends a lot of time imagining what these cities, countries and even the world, are going to look like in ten or twenty years from now.

Photography by Patrick MacLeod/WWD/REX/Shutterstock
Get the best of FASHION in your inbox Thanks for signing up!
The latest fashion, beauty and celeb news delivered right to your email #FASHIONforall Now, check your inbox to complete your subscription
We won’t ever use your email address for anything else
Want even more FASHION? Follow us on social media.