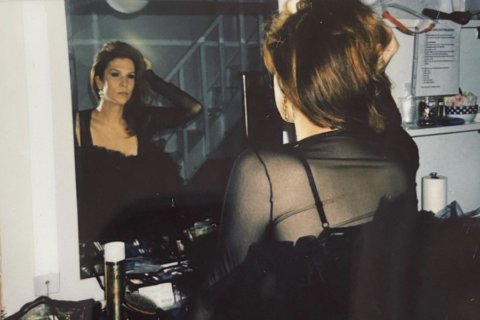 As a multi-disciplinary artist, makeup artist, and the curatorial coordinator, communications manager and editor at Montreal’s Never Apart cultural centre, Jordan King has a professional obligation to be in the know. But her innate curiosity and personal quest to pursue what lies beyond the mainstream is what makes King so good at these many jobs.

“I find that because there’s so much uniformity in the culture that we’re exposed to between Netflix and Instagram [for example], it feels like everyone’s watching the same stuff and having the same conversations,” she notes. “I’m trying to seek out what’s less typical.”

In addition to the intriguing subjects showcased in Never Apart’s magazine and podcast — for which King’s spoken with the likes of model and makeup artist Corey Grant Tippin about his days in Warhol’s Factory and at Studio 54 — this notion extends to other programming the non-profit organization has planned this month. It’s not Pride-specific, King says, but is still a way of celebrating. On June 17, she’ll be talking with Raja Feather Kelly — the New York-based choreographer, writer and dance company director — about his latest production, “Hysteria.”

“Hysteria is a hybrid installation and online performance,” King says, noting that it was “created in response to the pandemic, but is also location-specific.” The traveling, hyper-pink world constructed for the show continues Kelly’s legacy of creating works that speak to issues around race and sexuality.

“Raja is a Black queer man in America with a lot to say,” King adds. In addition to their one-on-one dialogue, a Q&A portion will be opened up for those wanting to learn more about “Hysteria” and Kelly’s other career highlights including the founding of the multi-hyphenate company, The Feath3r Theory.

This year’s primarily-virtual Pride festivities means that King has the ability to take in more of the action than she normally could. She plans on tuning into the 2-Spirit Cabaret hosted by Toronto’s Buddies in Bad Times Theatre on June 24, as well as the Burlesque Hour on June 18 that’s part of the official Pride Toronto programming.

A post shared by Buddies in Bad Times Theatre (@buddiesto)

“As a former burlesque performer, I’m so wowed by all the creativity that’s shining from within that community,” King says. “I think [people] have gotten quite crafty in terms of how they’re performing, and sharing their performances online. It’s just eye candy — visual joy.”

King acknowledges that Pride isn’t just about happy-making moments, though. And she highlights the difficultly she’s had in feeling “disconnected” from many meaningful events happening in New York City, where she was living until moving back to Canada last year.

“It’s been tricky during the pandemic to feel connected to causes,” she notes, pointing to the work of Reclaim Pride and its effort to “reclaim [the idea] that Pride should be less about corporate involvement and more about what it was originally started as, which was a rally or what some would call a protest.” King adds that the undertaking is especially “focused around the people who are the most marginalized: people of colour and trans people.”

King says it’s also been frustrating not being able to physically support other key Pride efforts, such as the Brooklyn Liberation March that took place on June 13 and had the specific mandate of an urgent call to action to protect transgender youth in light of the unprecedented amount of anti-trans legislation passed in the U.S. so far this year.

“It’s hard to watch [it] unfolding without being there in solidarity,” she says. “But I’m still in such support of it.” And really, as the meaning and manifestation of Pride month continues to evolve, there’s nothing more crucial than living and supporting the values of its roots every day, everywhere, in any way possible.