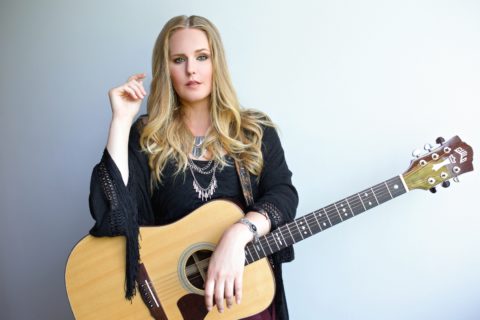 Think of Jessica Mitchell as an open (song)book.

There’s no question the 32-year-old Canadian country singer won’t answer, even if it has to do with stigmatized topics like mental health, addiction and her late mother’s battle with ovarian cancer.

“We’re given a platform as artists and entertainers to speak on things that are of importance … and to abuse that power is not necessarily the most humane thing, in my opinion.”

And clearly her fans are loving it. This past summer, Mitchell, (who’s been dubbed “country’s Adele”) posted a Facebook video of herself crying while listening to her single, “Workin’ on Whiskey,” on the radio for the first time (it’s now at almost 70,000 views). It was a milestone moment for the songstress who was once told her voice was “too dark” for radio.

“‘Workin’ on Whiskey’ was a song that came from such a personal and special place … and I think people just latched on to that,” she says. “Music has taken such a turn these days …I think people are really starting to [show other people] who they really are, which I think is just absolutely stunning.”

The London, Ont.-native got her start in music at a young age, when her dad gave her a guitar. Soon after, she began writing poetry, and finally decided to merge the two mediums.

“I had a lot of issues in my teens … emotional issues and mental health issues, so it was a good outlet for me, being sort of brought into that world a little bit,” she explains.

But it was Mitchell’s mother who played a significant role in her music career.

“My mother shaped me as an artist. She was always really proud that [music] was something I wanted to pursue. She came with me to Canadian Idol [Ed. note: she made it to the top 32], was there every step of the way, and I can’t thank her enough for that.”

i miss you erryday mama pants. i get to be close to you twice at 30K feet this aft.

Since signing a publishing deal with Slaight Music, Mitchell spends her time between Toronto and Nashville, which she considers her “work home.” She’s actively working on new music, is set to tour with country music legend Terri Clark in March and will be taking part in the Art of Time Ensemble’s Northern Songs showcase Feb. 16-18.

But of all these projects, Jessica is “really looking forward to” the Lady Ball, a fundraiser in support of ovarian cancer that will be held in Toronto this March.

“Ovarian cancer is such a scary thing for women, but it doesn’t have to be,” Mitchell explains. “My mother never used it as [a death sentence] — she pushed forward, she prevailed and she always had a positive attitude.

“The awareness aspect [of the ball] is perfect …it’s on the right track. It’s just important to talk about these things, and I will never say no to talking about anything … well, except my love life. It’s the worst. [Laughs]. But, it makes for great music! And I have my cat.”

Photo: Phil Crozier
Get the best of FASHION in your inbox Thanks for signing up!
The latest fashion, beauty and celeb news delivered right to your email #FASHIONforall Now, check your inbox to complete your subscription
We won’t ever use your email address for anything else
Want even more FASHION? Follow us on social media.