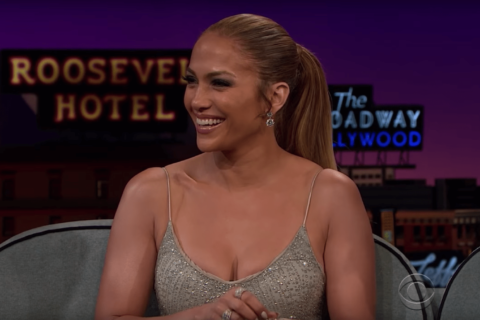 In case you forgot, the 47-year-old singer appeared on Corden’s Carpool Karaoke segment a year ago, and things got wild after the talk show host hijacked her phone and texted DiCaprio. “Hey baby, I’m kind of feeling like I need to cut loose. Any suggestions? Let me know. J-Lo (you know, from the block),” Corden wrote. A few minutes later they received a response reading: “You mean tonight, boo boo? Club-wise?”

In last night’s appearance, Jenny (you know, from the block!) explained that Leo was “cool” about the text. “He wasn’t mad at all! I was afraid he would be mad when it came out,” she says about the hilarious segment.

She also admitted that she was also surprised that he took the bait. “He answered back like it was totally normal, like I would speak that way to him,” she laughed. “I guess he calls every girl ‘boo boo.’ I don’t know.” Check out the clip below.

Photography via youtube
Get the best of FASHION in your inbox Thanks for signing up!
The latest fashion, beauty and celeb news delivered right to your email #FASHIONforall Now, check your inbox to complete your subscription
We won’t ever use your email address for anything else
Want even more FASHION? Follow us on social media.