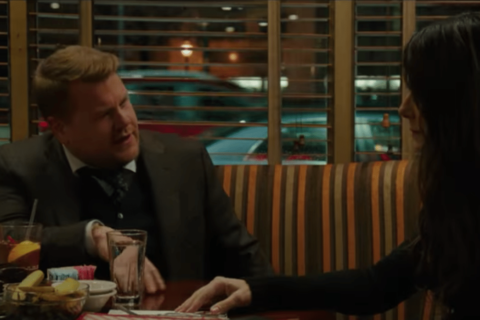 OK, so we can all agree that Ocean’s 8 is one of the most highly-anticipated films for 2018, right? Right. So when the first official trailer for the film was released this morning, we were stoked to watch it. And guys, it looks good. Like, really good. We’ll let this Twitter user sum it up for you:

THE OCEANS 8 TRAILER HAS LEFT ME WITHOUT LIFE, EDGES AND IN DESPERATE NEED OF MY INHALER. ITS GOING TO BE SO GOOD #Oceans8 pic.twitter.com/7vS6anq60g

There’s plenty to be excited about — first, it’s been a while since we’ve seen something new from the Ocean series (you know, the ones starring George Clooney and Brad Pitt), second, the big heist takes place at the Met Gala (!!!) and third, the film has an ALL-FEMALE, ALL-STAR CAST: Sandra Bullock! Cate Blanchett! Anne Hathaway! Rihanna! Mindy Kaling! Awkwafina! Sarah Paulson! Helena Bonham Carter! … or so we thought… until the very end of the trailer, when this happened:

Umm… is that James Corden? What is he doing there?

Yes, the late night talk show host (and our fave carpool karaoke driver) popped up randomly (OK, maybe not so randomly, since Deadline announced he would be in the film back in January, but you get what we mean) in the Ocean’s 8 trailer which sparked a lot of, well, rage and confusion, at least from the Twitterverse.

Really confused about James Corden being in #Oceans8

Aaaaaaaand then James Corden shows up in the Oceans 8 trailer… pic.twitter.com/bw7mRjgWcD

Oh WHAT. What the hell is James Corden doing in that trailer- screwing up the almost perfect Oceans 8 casting pic.twitter.com/IPok0UGGDH

This Oceans 8 trailer looks pretty cool, it could be fun & ….. oh wait never mind James Corden has some how ended up in it. Give it a miss

On finding out james corden is in the new oceans 8 movie. pic.twitter.com/JR9HAbZ8lf

Just seen that James Corden is in that new Oceans 8 trailer… Thanks, but I’m out pic.twitter.com/TbYmlLoPYi

Oceans 8 meant to be an all female cast yet that talentless James Corden in it though? From George Clooney to him pic.twitter.com/gMgIhAl4TY

Now let us be clear here: we don’t hate James Corden. In fact, we actually quite like him (and carpool karaoke, as we said above). But what seems to be the problem here, at least to the above Twitter users, is James Corden is EVERYWHERE lately. Along with hosting The Late Late Show With James Corden five nights a week, the English actor/singer/comedian also hosted this year’s Grammys, was featured in several commercials in the U.K. and was thought to have made a cameo in Star Wars: The Last Jedi (he later clarified to NME this isn’t true). Oh and he’s been in the headlines even more recently, as his wife gave birth to their second child, resulting in Harry Styles taking over hosting duties for The Late Late Show.

Others seem to be questioning his acting abilities–though, for the record, this isn’t his first role in a film (his credits include Trolls, Into the Woods, The Lady in the Van and The Emoji Movie).

I really hope #Oceans8 is going to be good. Not like Ghostbusters.
But James Corden is in it…. why? Anyone can be actor nowadays?https://t.co/dNcIA8hSBg

But hey, maybe we should cut him some slack? Sure, it did seem a bit bizarre to have him pop up in the trailer, but we can’t really tell how good (or bad) his performance is until we see the actual film.

In the meantime though, you can watch the full trailer below: