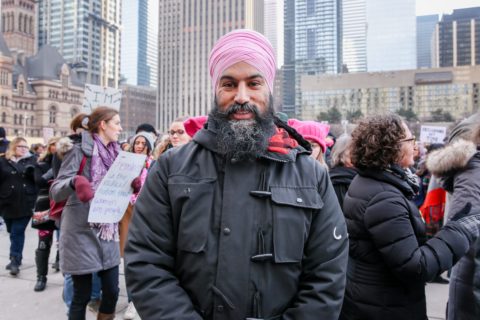 Here’s Why Jagmeet Singh’s #MeToo Story Is So Important

In his new book, the NDP leader opens up about sexual abuse during his childhood.

An excerpt from Jagmeet Singh’s new memoir, Love & Courage, details some painful truths and experiences from the NDP leader’s childhood, including memories of sexual assault. At the age of 10, tired of being bullied for his name and long hair in his Windsor, Ont. school, Singh decided to enrol in taekwondo classes. But in a traumatic twist, the activity he undertook to learn how to defend himself led to sexual assault at the hands of the martial arts coach he was training under.

“When it happened I didn’t know what to think,” Singh tells Anna Maria Tremonti on CBC Radio’s The Current. “Even now when I think back it’s almost unimaginable that someone would go to such lengths to set up a way to assault a young kid… I felt shame and guilt, which I know is normal when you go through something like this. I also felt that it was my own fault, that I should have stopped it.”

It’s this feeling of self-blame that often precludes survivors from sharing their stories, but confiding in a friend who eased his guilt helped Singh open up and eventually share his story with his mother at the age of 25.

“I feel like it’s really important to say this,” Singh tells Tremonti, choking up. “Before I talked to my mom about it, one of the things that was really important to me was a dear friend told me that it wasn’t my fault. And that was a really special moment. Because I knew it wasn’t but I hadn’t heard anyone say it to me. And I want to tell people the same thing. It’s not their fault.”

The #MeToo movement has awakened the world to the pervasiveness of sexual abuse and harassment but male survivors have remained largely on the sidelines of the conversation. Terry Crews has been vocal about his experience with assault as have the young men at the centre of the Michael Jackson documentary, Leaving Neverland. Singh stepping forward with his story adds another, powerful voice to the mix. So many young men suffer in silence because they’re worried about being seen as weak or vulnerable, and often in communities of colour there’s even more of a cloak of silence and a stigma around matters of sex. As a child of Indian immigrants, a visible minority, and someone now in a position of political power, Singh’s courageous coming forward will hopefully help others—young men in particular—feel less afraid to share their stories and work towards healing.

Love & Courage: My Story of Family, Resilience, and Overcoming the Unexpected is out now.