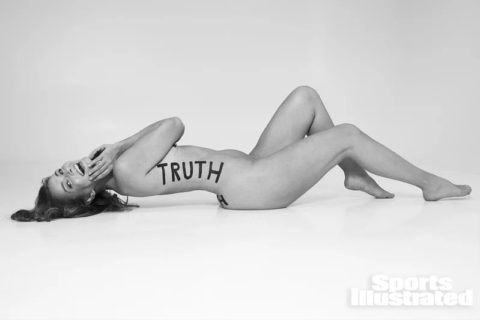 The ranks here at FASHION are not filled with men. Shocking, right? But there are one or two (there are actually, literally, two). Naturally, when a question about male behaviour arises it’s only fair that one of them stand in for the members of his gender and provide some insight. Our last topic of conversation was Justin Timberlake’s supposed Time’s Up hypocrisy and today, we contemplate the wokeness of Sports Illustrated‘s latest Swimsuit Issue. Two of our staffers—from the men’s corner, Greg Hudson, and from the women’s, Pahull Bains—talk it out.

Greg Hudson: It’s coming on a very important time of year for my 15-year-old self: the annual Sports Illustrated Swimsuit Issue will be dropping in a week or two. This was a magazine that permitted me to look at half-naked women and almost not feel crushing guilt. But, more and more, it’s a relic of a different time. Not because of its depiction of women, exactly, but because it’s essentially PG-13. And these days, there isn’t much demand for that.

But, in other ways, SI is trying to be very modern. A recent article in Vanity Fair investigated how the new issue responds to the #MeToo movement. (Well, I say responds, but really the content of the mag was planned long before any of the #activism began.) This includes, I guess, having more women creators and letting the models more involved with the whole process? I have no doubt that these changes, such as they are, won’t affect the overall feel of the mag, but I do wonder if efforts like this resonate with women. You’re a woman. What do you think? I’m sure you’re worried about the integrity of the publication, no? You’re a big fan of the Swimsuit Issue, right?

Pahull Bains: Yes! I read it cover to cover, all 36 words of it. So, short answer to whether efforts like this resonate with women: no. Not when they’re more self-congratulatory than truly meaningful. This is essentially them trying to convey that they’re “in on it,” that they’re super self-aware, that the post-#metoo era means something to them, thank you very much. They’re not just giving us naked bodies, they’re giving us naked bodies with powerful words emblazoned across them—truth, mother, human. (Lest you forget that women are humans too.) But rather than a superficial attempt at bringing their models’ voices into the narrative through these images, how about—stay with me—actually giving them some space to say what they think? (Now, I haven’t read this issue of Sports Illustrated Swimsuit because it’s not out yet, but if I go by what previous issues are like, there’s nary a word from the women in any of these “stories.” Last year’s issue featured Olympic athletes Simone Biles and Aly Raisman in all their strong, toned, powerful glory, but not a single quote from either of them. To make matters worse, there is a whole sidebar dedicated to the shoot location and what the team did, ate and saw there.) Basically, all of this reads like a very perfunctory attempt at proving their, as you might like to say, ‘wokeness.’

GH: I agree that it seems more like spin than anything else, but you raise a good question: what’s the purpose here? Are there, perhaps, some cultural products where #MeToo doesn’t really fit? And that actually goes back to the question of who the Swimsuit issue is for. The audience is almost entirely men. The purpose is to be sexy–but not lurid or pornographic–and as such it walks the thin line between appreciation and objectification that all sexy photos walk. I think the photos in SI are beautiful and respectful and celebrate women of different backgrounds and recently, women of different shapes, too. But is that the environment that is most conducive to feminist messaging? Will anyone–specifically any dude–flipping through these photos think, “hm. That is a good point. Women are complex, nuanced creatures and I should grant them the same respect I instinctively show to my male colleagues?” I kind of doubt it.

But! Maybe that’s not the point. Since this issue is mostly directed at men, it seems like this messaging is also for dudes, but #MeToo and #TimesUp isn’t just about teaching men, it’s about gender equality. And so if this issue really has given more opportunities to women photographers and production teams, then whether it seems performative or not, it’s still doing something. It represents real change, even if it’s entirely behind the scenes. It’s easy to assume the entire endeavour is a little sexist, what with all the half-naked bodies posing for the male gaze, but if it’s all made by women, that’s something.

I don’t think having the subjects speak more is a solution. Not because women should only be looked at and not heard, but because, well, while exceptions exist, models and athletes–and this is true for both men and women–aren’t always sources of blistering insight. Plus, would anyone even read what they say? This isn’t Playboy–you can’t even claim to pick up the Swimsuit Issue for the articles.

PB: How can this magazine claim to be celebrating women and their voices, when, according to Vanity Fair, this was the first shoot in which “models were as much participants as objects”? (So many things to pick apart with that one.) Look, be what you are. If you’re a magazine that relies solely on images of half-naked women to sell its copies, and cares nothing of the actual women said bodies belong to, well, own it. (Own it, is incidentally, one of the phrases painted on a model’s body in this shoot.) But don’t try to inject some semblance of social and cultural awareness into a publication that clearly has none. A couple of issues with what you said: it’s pretty patronising to say that models and athletes aren’t sources of insight. Especially at this moment in time, when pop culture and sports icons like, say, Colin Kaepernick or Meryl Streep have successfully managed to derail many of Donald Trump’s work days (though, to be fair, it doesn’t take much to make that happen.) But I certainly don’t think only deeply insightful or thought-provoking statements are worthy of being printed next to a model’s face or body. If you’re featuring talented and accomplished women, particularly if they’re not professional models, ask them a damn question—about anything. Also, you said something about how this magazine celebrates women of different backgrounds. But, celebrates what exactly? Let’s be clear. It celebrates their bodies, and nothing else.

To your point about the issue giving more opportunities to women—yes, I was super surprised to find that the editor of this issue is a woman, and that her core team comprises all women. I wasn’t surprised, though, to learn that in the magazine’s 54-year history, this is the first time that a female photographer has been hired to shoot the nude spread. It’s been a long time coming, but that’s definitely a positive and encouraging sign. And I feel like that is a much more truthful, organic way for magazines like Sports Illustrated to reckon with the post-#metoo era: by employing more women, by creating safe spaces for women to be naked and vulnerable, by allowing women to control the narrative they’re projecting to the world—even if the end goal is creating a sexy photograph for a man to obsess over.

GH: I think we’re in agreement.

But, I will take issue with what you took issue with: I clearly stated that exceptions exist among models and athletes. There have always been, and continue to be, celebrities from all industries that stand up and speak out. But one of the reasons that Kaepernick was treated so unfairly is because he’s in the minority of athletes. Exceptions exist, but the reason they get attention when they speak out is because it’s not the norm. Both models and athletes have devoted their lives to making their bodies as close to perfect for their job as possible. Activism and debate haven’t been a part of their training. Maybe they don’t speak up out of fear of saying the wrong thing, or maybe they don’t feel equipped, or maybe they just don’t think it’s their job, or they are worried about a backlash. But you know what they have been trained for? Answering questions in bland, inoffensive ways. “We left it all on the field.” “We gave it a 110%, but you know, we also got lucky.” The exception proves the rule here. God bless all celebrities that speak out, that join the debate, whether they feel equipped or not. But, nobody dast blame them for not being great orators on top of their otherworldly discipline, talent, and (for models) appearance.

But, you’re probably right. Just having them say anything at least reminds “readers” that they are more than just bodies. They don’t have to say something political or woke–the fact that they are talking at all is something. And I guess, in the end, that’s all that we should expect from media like this. Just do something. But, when you do something, maybe you don’t need to make a show of it.

Photography via Instagram.com/SportsIllustrated
Get the best of FASHION in your inbox Thanks for signing up!
The latest fashion, beauty and celeb news delivered right to your email #FASHIONforall Now, check your inbox to complete your subscription
We won’t ever use your email address for anything else
Want even more FASHION? Follow us on social media.