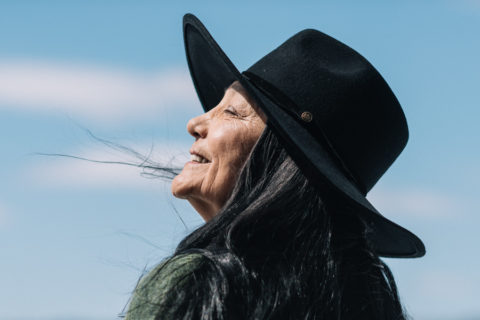 Including Falls Around Her, Blood Quantum, and There's Something in the Water.

June is National Indigenous History Month, a celebration of “the history, heritage and diversity of Indigenous peoples in Canada.” In honour of this month, and to shine a light on the varied experiences of Indigenous communities not just here in Canada but around the world, we rounded up 12 movies and television shows about and by Indigenous people. Read on for the list, and where to stream them.

Falls Around Her
This 2019 film features legendary Cree and Métis actor Tantoo Cardinal in her first lead role, as a famous Anishinaabe musician who returns to the Northern Ontario reserve where she grew up after years of touring the world. Written and directed by Darlene Naponse of the Atikameksheng Anishnawbek First Nation, the film explores issues of isolation, resilience, community and healing. Available on Crave

The Body Remembers When the World Broke Open
Inspired by a real-life experience, this Canadian Screen Award-winning film depicts a chance yet profound encounter between two Indigenous women in Vancouver on a rainy afternoon. Though both women are Indigenous, their backgrounds couldn’t be more different. Rosie is a member of the Kwakwaka’wakw First Nation and lives in a housing project; Aila is half-Sámi (from Norway) and half-Blackfoot (from Alberta) and seems to live a comfortable middle-class existence. Issues of race and class enter the story gradually, making the relationship between the two strangers more complex as their interaction wears on. Read our interview with the film’s co-directors here. Available on Netflix US

Blood Quantum
Selected as the opening night film of Midnight Madness at TIFF 2019, horror film Blood Quantum centres around an isolated Mi’gmaq community in Quebec that discovers they are the only humans immune to a zombie plague. “The whole film is just based on the concept of irony,” director Jeff Barnaby tells Vulture. “The irony of Natives being immune to a plague, the irony of them being in a position of power… It was all meant to be flipping the script and ties into this bigger meta-statement of Native people being represented onscreen.” Available on demand

êmîcêtôcêt: Many Bloodlines
This short documentary—clocking in at just 11 minutes—follows a Cree filmmaker and her white partner on their journey to parenthood. “From the search for an Indigenous donor and midwife to their concerns about raising a child as an interracial queer couple, the joy of having a child together gives them the courage to overcome any obstacle,” writes Hot Docs programmer Alexander Rogalski. Available to stream via Hot Docs Canada for Ontario audiences only

NSI IndigiDocs film êmîcêtôcêt: Many Bloodlines wins Betty Youson Award for Best Canadian Short Documentary at Hot Docs fest – The Hot Docs jury members said the award was given "For the remarkable strength of its convictions and the tenderness of its filmmaking …"
… pic.twitter.com/d3ikdLkcXI

Future History
This Canadian Screen Award-winning documentary series follows Kris Narghang, an Indigenous archeologist, and Sarain Fox, an Indigenous activist and artist, as they explore their own identity biases and beliefs, meeting with Indigenous leaders and innovators along the way. Available on CBC Gem

There’s Something in the Water
This documentary, co-directed by and featuring Ellen Page, shines a light on environmental racism, a term used to describe environmental injustice that occurs within a racialized context. Focusing on the injustices and injuries caused by environmental racism in Page’s home province of Nova Scotia, the film gives voice to Indigenous and African women fighting to protect their communities, their land, and their futures. Available on Netflix Canada

Breaking the Silence
This documentary focuses on Luz and Claudia, two women from the Emberá Chamí Indigenous community in Colombia, one of the few communities in South America that still carries on the practice of female genital mutilation. In an effort to end this practice, the two women travel home to initiate a dialogue with other Indigenous women in their community about the brutal practice and the urgent need for it to stop. Available to stream via Hot Docs Canada until June 24 for Ontario audiences only

The Song of the Butterflies
Focusing on an Indigenous painter from the White Heron clan of the Uitoto Nation in Peru, this documentary follows his journey as he leaves his community behind to pursue a career in Lima. However, after finding himself creatively blocked he realizes that he needs to face his parents’ and his community’s dark past in order to move on. Available to stream via Hot Docs Canada until June 24 for Ontario audiences only

The Grizzlies
Based on the true story of a group of Inuit students in a small Arctic town suffering from one of the highest teen suicide rates in the world, this 2018 film follows the students as they are introduced to lacrosse by a “culturally ignorant” white school teacher. As a newfound team, the players learn to lean on each other and their community, and go on to compete in the National Lacrosse Championships. Available on CBC and CBC Gem from June 27

Mohawk Girls
This half-hour dramatic comedy explores what it means to be a modern day Mohawk woman, through the eyes of four young women—Bailey, Anna, Zoe and Caitlin—and their interactions with their parents, friends and community members. The show’s fifth season concluded in 2017, but the show will be available to stream from Season 1 on CBC beginning June 16. Available on CBC Gem.