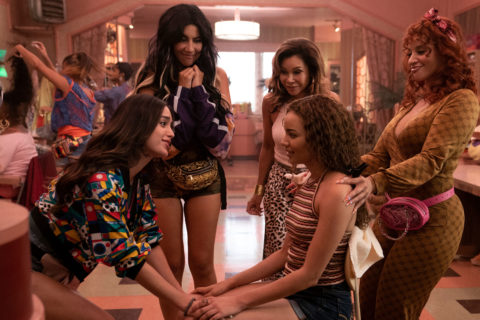 “In the future, people are not going to be able to say that there aren't any Latinos that can lead movies, because they just demonstrated that there are."

In the Heights is a story about what it means to be home. Written over two decades ago by Lin-Manuel Miranda, the creator of the Broadway sensation Hamilton, the musical is an ode to Washington Heights, a Manhattan neighbourhood near where he grew up that’s home to a large Latinx community. The play depicts what it’s like to have big dreams while grappling with the reality of your situation and, most crucially, the importance of leaning on your community. Three years on Broadway, four Tony Awards and countless accolades later, In the Heights is officially hitting the big screen as a feature film. Directed by Jon M. Chu of Crazy Rich Asians, the movie is an energetic, colourful adaptation of the play, complete with cast-wide dance numbers and heartfelt ballads.

In the Heights depicts a Washington Heights that is bustling. Crowded streets and sidewalks, long chats in the bodega and large family-style apartment gatherings convey a feeling of nostalgia that is especially touching in our pandemic-enduring world. The musical film reminds us that the most important moments often come from the mundane, everyday interactions we sometimes take for granted. It’s the perfect film for those of us longing for community after a year of disconnection.

While punctuated with moments of fantasy, the film adaptation has an underlying narrative of real-world issues — like the impact of gentrification on the neighbourhood and the Trump administration’s attempts to end DACA — while focusing on the dreams and struggles of its characters, two of whom are Nina and Melissa. Nina (played by Leslie Grace) is the first in her family to attend university, but after completing her first year at Stanford, she feels ostracized by the elitist world of academia. As a result, she struggles with feeling out of place both at home and at school. Vanessa (played by Melissa Barrera) is a hardworking aspiring fashion designer who hopes to make it big in the city, but is lacking in connections and financial advantages.

Ahead of its release on June 10, FASHION spoke with stars Leslie Grace and Melissa Barrera about the cultural importance of the film, the pressure of doing this story justice, and how they hope In the Heights will make an impact in Hollywood.

“For me, everything about this project is so important,” Grace says. The Dominican-American performer felt a personal connection to the role she played. “With Nina, I just felt fully seen in her character. I felt like it was the first time I was reading experiences and dialogue of guilt, pride, and shame, all mixed into her experience of being a first-generation Latina in the States. I had never seen that on screen. I had hoped to find somebody that would talk about it and embody it, so I could be like, ‘Oh, my God, I’m not alone!’” In the Heights was just that for her: tangible artwork that reflected her lived experiences.

“What’s so great about this movie is that it’s aspirational, and it’s celebratory about our people,” Barerra tells FASHION. “We’re so used to being portrayed in a negative light. In the major films, the few roles that [Latinx people] get are usually about gang violence, drug trafficking, or illegal immigrants — always [focused on] the struggle. This movie has such a positive message about community, about dreaming big, finding success, finding love and finding a home, and all those things are so important for the younger generations to see.”

Grace agrees. “We so often see people of colour on screen being dehumanized. And now, you get to see us dream as big as anyone else on screen, which sounds so strange to say, but we rarely do get to see that. So I think that’s the most beautiful part about this.”

While making the film, the pressure to live up to the beloved musical was not lost on anyone, Grace explains. “Every day, we felt like we were being trusted to bring our value, but at the same time, we were like, ‘I got my family on my back, I got the pride of my people [and] my ancestors on my back. And I don’t want to mess this up.’ Each one of us, down to every dancer, had that [feeling] of, ‘This is the one time that I can walk on set with my full self and show them what I got.’ We were all challenged in new ways that were scary, but we had a whole community and family on set to face it with. That didn’t make it any less scary, but it did make it more of an experience, and so much more valuable. I think that’s why our movie has so much heart: because we all felt personally responsible to tell this story and do it justice.”

The film is an outlier compared to most big-budget Hollywood productions because most of its stars are not previously established A-listers. Miranda and Chu had to fight to make that happen. They told Variety that other movie studios wanted to hire actors from the small pool of already widely known Latinx stars, and didn’t want to “commit” to lesser-known names for the film. This, they noted, contributes to the cycle of fewer opportunities for Latinx people who are trying to make it in the entertainment industry.

“I think of one of the biggest problems in Hollywood and one of the biggest setbacks for our community is that [people] always argue that there aren’t any Latinx superstars, or there aren’t any ‘bankable’ Latinx names,” says Barrera, who is Mexican. “It would have been easy for Lin and Warner Bros. to say, ‘Let’s do this with the few [Latinx stars] that there are, because we need to sell.’”

Grace recalled going to another studio and hearing them suggest people to play Usnavi, the film’s leading character, that “didn’t make any sense” but that ticked the boxes of being big names in music and being Latino. “It happens all the time,” she says.

“I think Lin and Jon really wanted to say, ‘We’re going to find the best people for these roles — people that can sing, dance and act — and we’re going to make them stars.’ So that in the future, people are not going to be able to say that there aren’t any Latinos that can lead movies, because they just demonstrated that there are,” says Barrera. “It’s a beautiful thing that they were allowed to do, and that they fought to do. The star of the movie is the show itself, the story. It didn’t need any [big] names to be the powerful movie that it is.”

In the Heights will hit theatres and be available for streaming rental on June 10.

This interview has been edited and condensed for clarity.

Photo courtesy of Warner Bros.
Get the best of FASHION in your inbox Thanks for signing up!
The latest fashion, beauty and celeb news delivered right to your email #FASHIONforall Now, check your inbox to complete your subscription
We won’t ever use your email address for anything else
Want even more FASHION? Follow us on social media.