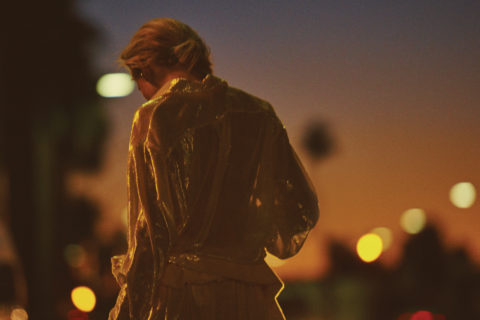 Read Chapter 1 of Ian Williams’s Exclusive Short Story “I Want It All. I Want It Now.”

We wanted our Summer issue to be special, as it’s on newsstands for three months. What we came up with is two pieces of culture in one: There’s a short story, a dark take on contemporary romance written by Canadian poet and novelist Ian Williams, and then there’s the regular Summer issue, featuring Kacey Musgraves on the faux cover. Below you’ll find the first chapter of the fictional story, “I Want It All. I Want It Now.” If you pick up our Summer issue, on newsstands May 26, you’ll find it intertwined with stories on travel, trends and all the other content you’ve come to expect from FASHION.

I looked at my phone for—no joke—15 seconds to respond to a notification. (My father. Could I work that afternoon?) And when I looked up, my boyfriend was checking out a blond in the checkout line ahead of us. He was trying to be discreet, absent-mindedly picking the inside corner of his nose and nibbling both of his lips, willing the woman to turn around so he could see her face.

I tapped my phone against the magazine rack and waited. I picked up a pack of Trident, glanced at the nutritional label, put it back. Unbelievable. Hudson was grinding up on her in his fantasy. From the back, the woman was either Dolly Parton or Nicki Minaj. Blond. She wore high-waisted mom jeans, a white crop top, hoop earrings the size of her bracelets and probably too much makeup. She was probably Botoxed between the brows, probably had too much filler in her lips and probably her face was coated in downy fuzz.

So you got a contract for a shoot in—Whistler? Hudson came out of his trance.

Mexico. Even better, he said. You can swing up to L.A. and meet me.

He mouthed “working” and made air quotes.

You’ll be “networking,” I said. Same finger quotes. You swing down and meet me. I’m always the one following you around.

Do you know her or something?

I lifted the dog from the examination table into a plastic bag. It was an old honey-coloured Yorkie with long bangs—a faded beauty queen. I took it down to the freezer.

We had one more procedure for the day; then my father would get in his car and drive to Whistler. He had a condo there and an Australian girlfriend who thought I should be teaching public school and nursing a baby at 25. Neither my father nor the girlfriend understood terms like contract labour, freelance, precariat.

I made room in the freezer for the Yorkie. As a child, I remember my father teaching me the difference between a carcass and a corpse. To me, it was all death, a staple black dress. But to him, death was more elaborate, like a damask pattern. The worst part of death was not knowing you were dead, he thought. Not pain, not leaving people behind, but the blindness of the dead regarding their condition. I closed the freezer door and returned upstairs.

Up next, we had a Pomeranian with an intestinal blockage. I held the dog’s head; my father injected it and cut its stomach open. Then we took turns feeling along the intestines for the obstruction. It was a good note to end the day on.

Sometimes he injected them and they didn’t wake up.

I learned early on not to be squeamish. My father doesn’t pay me. This is not my life. It’s not even my job.

How blond we talking? Ella asked.

I was sitting on the lip of her bathtub while she sectioned my hair into six parts. I had bought two boxes from L’Oréal Preference: my regular light brown shade, “Shade 36 Havane,” and my dream shade, “Medium Rose Blonde 823.”

I wanted to be so blond that I’d turn the festival into a testostefest of bug-eyed guys tryna get with me. Hudson would block hotties with his shoulder and say, You got a problem, bro? They’d scuffle. Maybe rip their white tees. Blood. Yeah, a bloody nose or two. I’d drag Hudson off the guy, then clutch his bicep as we walked away. From the back, my blond hair would be dishevelled but fabulous.

You gotta work on your feminism, girl. Ella put on gloves. What’s it gonna be?

You don’t think it’ll look like a wig on me? With my eyebrows and everything? I’ve got all these gigs late in the summer. I can’t show up looking like a bleached fern.

I considered the models on both boxes. The blond was radiant, but the brunette was sultry. In the end, I slapped the light brown box into her hand. Safe.

Ella didn’t look surprised. I almost changed my mind, but she ripped open the box and I knew I couldn’t return it. I leaned forward, partly so she could start with the roots at the back, partly to hide my face.

Ella and I were a year into an M.B.A. program, half online, half in the classroom. On the first day of Risk Management, I introduced myself as Odile, a model. The female professor said, There’s math in this course. The male students looked up from their phones and calculated their chances. All the female students dismissed me as a ditz, except for Ella. On break, she characterized the professor as the kind of white feminist who is a puppet of patriarchal oppression in all its forms, including capitalism. Ella had a background in social justice and intersectional politics.

You do realize you’re basically a white feminist, I said. She stroked her hair hand over hand, like a Kardashian.

I totally realize my complicity in the problem, she said, full of vocal fry. Then, seriously, she added: I’m in this M.B.A. to grow a dick and then cut it off. I should have introduced myself as Ella, I used to be a stripper.

Ella applied dye to the middle section of my hair, then to the front.

I told her that I caught Hudson looking at a woman in a grocery store.

I did not break them up.

You kinda did, she said. Karma’s not just the name of an escort.

I met Hudson in Risk Management. He told me later that his philosophy was always to approach the hottest girl in a room first. Go big. And there was no question who was the hottest in that room of cuttlefish. His words. He was with another woman at the time. But he ended that relationship (like a month after we hooked up, Ella would add here), and we’ve been together for seven months. We went public. Like Ella, he was only getting an M.B.A. as part of a master plan; his was for him and his band to be a brand. He was in the program to talk the talk, to learn the reptilian language he could use in L.A. to get his band signed. His ultimate non-sexual fantasy involved rolling across America in a tour bus and calling me from pay phones in dusty rectangular states. Some women like men with plans. I like men with dreams. Or fantasies. Even better if they included me.

While we were waiting for the colour to set, I flicked my hand through her closet for something to borrow. Ella was taller than me so I couldn’t wear her pants, but everything else was fair game. I’d call my style “bohemian”—mismatched layers and oversized accessories—like a human gallery wall. Actually, I passed most of the spring semester layering Ella’s clothes on mine or Hudson’s. Sometimes his clothes ended up in her closet. Sometimes her clothes ended up in his. She slept in my bed some nights. I slept in hers other nights—maybe tonight.

When I saw my hair, I reacted like women in makeover reveals. I wasn’t blond, but I was my best self. My mother used to watch Oprah. Call me crazy, but a good dye job always makes my boobs look bigger. I had to fan my eyes to keep back the tears. Ella tried to get me to spend the night, but I messaged Hudson.

Texts after midnight always got an enthusiastic reception.

Hudson met me on the street as I was parallel parking. Even though he was a few feet away, I could feel him all over me like a cloud of blackflies.

He fluffed my hair with both of his hands and pressed me against the side of the car. A lump in his sweatpants. I was wearing Ella’s sequined shift dress; slipping off my shoulders, it was like wearing moonlight on a lake. Hudson kissed my neck, kisses like bubbles everywhere. I had stepped into a glass of Champagne. I turned my head into the glare of the Flight Centre’s lights.

He remembered his trips based on what he ate. I remembered mine by what I bought: a Michael Kors bag in L.A., a Dior macramé dress in Paris, Gucci slippers in Ireland, a Van Cleef & Arpels pendant in Chile.

Then I went inside and surfed him like in the Beyoncé song.

I fell asleep while Hudson was making himself an avocado sandwich. I woke up a few hours later, and he was fingerpicking his electric Gibson. The next time I woke up, he was mixing music with his laptop on top of his keyboard. Then he was flipping through the FASHION magazines I had left on his amp, maybe reading the marginalia I wrote while I was reading them.

It’s like he wanted to sleep but couldn’t. I got up and went to him on the couch.

What’s bothering you? I asked.

He shook his head. He was bouncing his leg.

I was used to his insomnia, but tonight his energy was more skittish. Maybe he’d had a late cappuccino. I put my hand down his pants to tire him out. He put his nose in my hair. When he tensed and exhaled, I lay down on top of him so he couldn’t move, so our heartbeats and breathing would synchronize and he’d fall asleep. (He believed in that cosmic energy stuff.)

But when I peeked, I saw that his headphones were on and his eyes were open.

At dawn, he walked me to my car.

What you got going on today? I asked.

He shrugged. I just need to get some sleep.

I nodded. I’ll leave you to that then.

I bought an Americano at the place nearby, but when I got back to my car, I saw him unlocking his bicycle.

He swooped a leg over the frame and pedalled hard the other way.

Odile’s story isn’t over yet. Where was Hudson headed and will his relationship with Odile survive mounting tensions when things don’t go as planned during a weekend getaway? See how it all pans out in Chapter Two and follow @the.real.odile on Instagram for real-time updates.