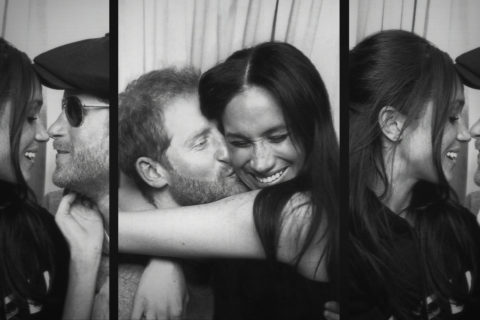 Turns Out Meghan Markle and Prince Harry Met On Instagram

And the oh-so-2016 Snapchat dog filter played a pivotal role.

I’d be lying if I said I wasn’t totally intrigued by the Meghan Markle and Prince Harry docuseries. My predisposition to watching it just comes down to science and genetics: I’m Canadian (and Meghan Markle is an honorary Canadian, having lived in Toronto for years while filming the TV series Suits), I’m a millennial of a certain age (which means I’m old enough to remember when Harry’s mum Princess Diana tragically died), and I’m a sucker for a good romance (of which Meghan and Harry’s story delivers plenty). So, when the first three episodes of the Harry & Meghan docuseries landed on Netflix on December 8, I watched episode one from my desk — in the name of journalism, of course.

There are tender moments of connection, heart-wrenching pieces of footage from Harry’s childhood, countless non-famous friends offering their perspectives of Meghan and Harry’s courtship, and, blessedly, a definitive answer to the burning question: how did Harry and Meghan meet? The most revealing — and ultimately relatable — nugget of information, in the first episode of Harry & Meghan is, in my opinion, that the couple first connected on Instagram in the summer of 2016 after the prince saw a video of his future wife on “a mutual friend’s” profile. And, AND, she was using none other than the extremely 2016 dog Snapchat filter. Yes, the one with the floppy ears and the big tongue. According to the pair, they then started chatting over DMs and text and eventually met in person for the first time when Meghan next travelled across the pond.

Now, this account does somewhat differ from how Meghan and Harry previously described their initial meeting, telling the press they were set up on a blind date by a mutual friend without ever revealing the role that Instagram (and that fateful doggy filter) played. But fair play for not wanting the world to know their love story started with a Snapchat filter, like so many modern romances do.

The Netflix series goes on to explain how after the aforementioned nameless mutual friend (who many have speculated was either Harry’s childhood friend Violet von Westenholz or fashion designer Misha Nonoo) told Meghan that a pal was interested in her, Meghan promptly asked the friend to show her the royal’s secret Instagram feed. When asked why she didn’t just Google Harry, Meghan explains that the barometer for getting an impression of a high-profile person is “not what someone says about you, but what you put out there about yourself.” Lucky for Harry, Meghan was taken by the “beautiful photography” and “environmental shots” in Harry’s Finsta feed and the rest is history. Stars (and royals)… they really are just like us.