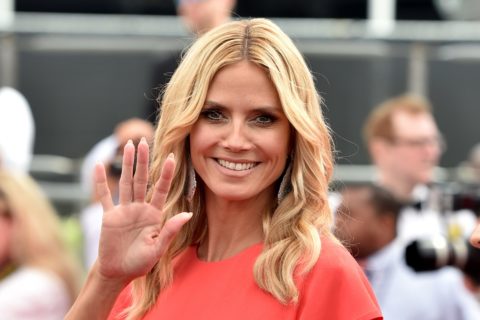 Ogers, like onions, have layers. To watch Klum have a team of makeup artists apply these many many prosthetic layers, head to her Instagram to see the transformation take place. You’ll notice that this perfect oger princess didn’t go green alone: her  boyfriend of six months, Tom Kaulitz, morphed into Shrek for the evening. If couples costume is a sign of commitment, this guy just won S.O. of the year.

The boobs! The butt! The eyelids! Could anybody but a supermodel (with access to a lot of financial resources) pull off this transformation?

The other primate photographed is Klum’s ex-husband, Seal. (Allegedly. You really can’t be sure under all that fur.)

What’s gorier than having two blood-splattered doctored wheel you into the party on an autopsy table? Klum told the MailOnline of her look: “It’s kind of like a dead body with the first layer of skin ripped off. It’s basically like me naked.” Cool.

The former Victoria Secret angel is used to walking around with giant wings.

Okay this is creepy.

Seal went as Eve. Which TBH is the better part of the couple’s costume.

Photography by Alberto E. Rodriguez/Getty Images for Variety
Get the best of FASHION in your inbox Thanks for signing up!
The latest fashion, beauty and celeb news delivered right to your email #FASHIONforall Now, check your inbox to complete your subscription
We won’t ever use your email address for anything else
Want even more FASHION? Follow us on social media.