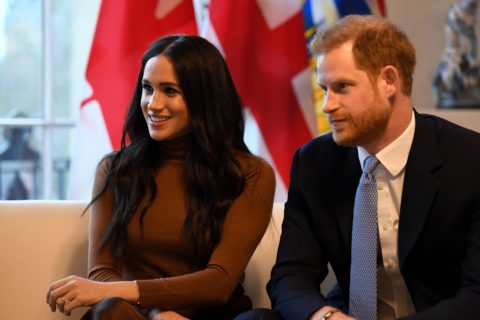 Two highly-anticipated documentaries dropped this week: one about Taylor Swift, and the other about Harry and Meghan.

ABC aired a documentary about Harry and Meghan
Earlier this week, ABC released a documentary titled Royal Divide: Harry, Meghan, and the Crown, which sets out to analyze the Sussexes’ decision to step away from their lives in the spotlight as “working members” of the Royal Family. According to The Cut, various royal experts and correspondents were interviewed for the documentary. These experts “point to the way the media maligned Meghan, and draws on footage from last year’s ITV documentary, in which the Duchess discussed the difficulty of her life as a royal.” There’s also an interview with polo player Nacho Figuras, a close friend of Prince Harry’s, who spoke to the emotional turmoil the royal has been going through. “He has suffered a lot from all of the things that have happened to him. He suffers a lot from people judging him. He’s being a father … a guy who is trying to protect his cub and his lioness from whatever it takes.” The documentary aired on January 29 on ABC.

Harry and Meghan – What Happened Behind Palace Doors? What Happens Next? ‘Royal Divide | Harry, Meghan and The Crown’ the Event Special premieres Wednesday at 10|9c on @ABC. https://t.co/KJAn42Yb85 pic.twitter.com/sIm7bkv6GO

Schitt’s Creek won a costume design award
At the 22nd annual Costume Designers Guild Awards in Los Angeles, hosted by Mindy Kaling, Schitt’s Creek took home the award for best costume design in the Contemporary Television category. Catherine O’Hara was on hand to accept the award on behalf of the show’s costume designer, Debra Hanson, and quipped that the show’s costumes had become some of her most prized possessions. During the recent Getty Fires, she said, “I had three minutes to evacuate. I grabbed my passport, photos of my two sons and my character’s clothes.”

The Crown announced it will be ending with Season 5
The jokes about Meghan Markle playing herself in a future season of The Crown must cease, because the show’s creator, Peter Morgan, just announced that the fifth season of the hit show will be its last. The third season of the drama, with Olivia Colman playing Queen Elizabeth II, landed on Netflix last November and the fourth season is currently under production. For the fifth and final season, Colman will be passing the baton on to legendary stage and screen actress Imelda Staunton. “At the outset I had imagined The Crown running for six seasons but now that we have begun work on the stories for season five it has become clear to me that this is the perfect time and place to stop,” Morgan told The Hollywood Reporter.

Netflix's 'The Crown' will end with season five, creator and showrunner Peter Morgan has revealed, with Imelda Staunton confirmed as taking the golden baton from Olivia Colman as Queen Elizabeth for the final season. https://t.co/7XlOLMI3j9

The Taylor Swift documentary dropped on Netflix
On January 31, Miss Americana, a much-awaited documentary about Taylor Swift, dropped on Netflix after premiering at the Sundance Film Festival. In it, Swift pulls back the curtain on some of her personal and professional highs and lows: speaking out politically for the first time, her struggles with an eating disorder, and the infamous incident with Kanye West at the MTV Video Music Awards in 2009. The documentary, which clocks in at about 90 minutes, currently has an 89% score on Rotten Tomatoes.

Photo by DANIEL LEAL-OLIVAS/AFP via Getty Images
Get the best of FASHION in your inbox Thanks for signing up!
The latest fashion, beauty and celeb news delivered right to your email #FASHIONforall Now, check your inbox to complete your subscription
We won’t ever use your email address for anything else
Want even more FASHION? Follow us on social media.