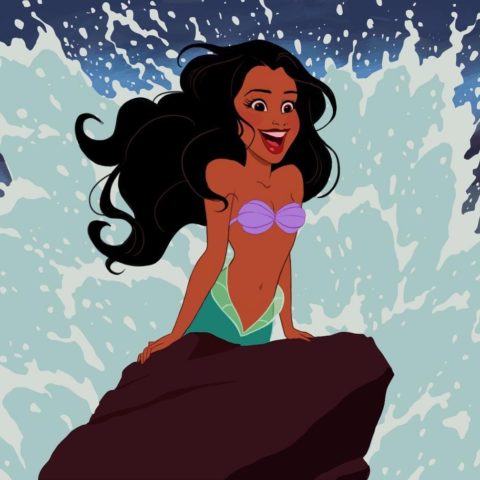 What is the web-o-sphere angry about this week? From the casting of a black actress as a fictional mermaid to another Taylor Swift feud, here’s everything you need to know:

THE STORY: Halle Bailey, one half of musical duo Chloe x Halle, was just announced as the new Ariel in Disney’s upcoming live action remake of the popular fairytale and people are upset—because she’s black. Some of them are going as far as “using science” to prove that she couldn’t possibly be black because she lives so far under the ocean that she wouldn’t have enough sun exposure to get darker skin. #NotMyAriel began trending on Twitter, not just because of the racist objections, but because of the many hilarious memes and tweets users fired back in defense of Bailey’s casting.

In my opinion, Ariel should look like Merida: White skin and red hair. #NotMyAriel pic.twitter.com/w86xobxMeI

I'm offended by the casting of a woman of colour as Ariel.

They should have used an ACTUAL, real mermaid.

Sick and tired of this human privilege.#NotMyAriel

#NotMyAriel ??? You remember when they painted Jake Gyllenhaal orange and called him Prince of Persia? Take a seat.

RIGHTEOUSNESS OF THE RAGE: This marks the first time Disney has cast a woman of colour in the role of a traditionally white princess character for one of its new remakes (the last time was Brandy as Cinderella in 1997), and is a huge win for people who never get to see themselves represented in children’s fairytales, whose characters tend to be overwhelmingly white. The fact that this furor is happening over a character that’s not even human—she’s an entirely fictional mermaid—makes the pushback even more absurd.

Ed Sheeran gets pulled into the Taylor Swift-Scooter Braun Feud

THE STORY: Earlier this week Taylor Swift shared a lengthy and emotional post on Tumblr explaining that the music from her last six albums—from her time at record label Big Machine Records—would now be owned by Scooter Braun, a music industry executive at whose hands she says she suffered “incessant, manipulative bullying.” A whole host of celebs jumped in with their own two cents on the matter, from Justin Bieber to Demi Lovato to Cara Delevingne. But for some reason the person most of the internet got mad at was… Ed Sheeran.

Ed Sheeran and Shawn Mendes were both opening acts for Taylor Swift's tours and it's no doubt that she give them so much support when they were small artists and needed it but yet they both remain silent when she needs their support. Trash.

It's kind of ironic that @edsheeran wouldn't be where he is if it wasn't for @taylorswift13 and now he's making music with @justinbieber. Reason no. one million why I've never really liked Ed. He's just another male asshole in the music industry. #IStandWithTaylor #Lover pic.twitter.com/4h7U27zusc

Fuck Ed Sheeran he’s never stood up for Taylor ever. she fucking took him on tour and featured him on her album when he was growing his career. he writes his music just as well, only difference is as a man he got the pretty side of the coin and gets praise from being a writer

RIGHTEOUSNESS OF THE RAGE: Though he has not yet said anything publicly, Sheeran did respond to an Instagram comment on his account, saying “I have been speaking directly to her, like I always do,” which, fine. Instead of pointing fingers at all the secondary characters in this very public feud though, perhaps Swift fans should spend some more time actually looking into the specifics of the whole messy situation and Swift’s role in it as more than just a person wronged. Of course she has every reason to be upset that someone else legally owns the rights to (and will profit off) the music she spent years making but as Vox notes, it’s not uncommon for record companies to own an artist’s master recordings. It’s also hard to ignore the fact that a lot of this feud seems to be fuelled more by, ahem, bad blood than righteous indignation. In a lengthy piece on Complex.com titled “Taylor Swift Has a Long History of Omitting Facts to Fit Her Own Narrative,” the writer expounds on Swift’s tendency to play the victim and twist facts to suit her image. [For those looking to follow every step of this feud, journalist Yashar Ali has a handy thread going on Twitter.]

An animated sex scene in Euphoria

THE STORY: The new HBO show starring Zendaya and Storm Reid has been raising eyebrows since episode 1, when 30 penises were featured in a single scene. The latest to get the internet buzzing is an animated scene featuring the likenesses of Harry Styles and Louis Tomlinson of One Direction. A character’s narrative arc on the show involves her penchant for creating One Direction fan fiction, illustrated in the show by a sex scene between Styles and Tomlinson. Fans were peeved, and Tomlinson himself took to Twitter to say: “I can categorically say that I was not contacted nor did I approve it.”

I’m? So? Confused? Who allowed Euphoria to use Harry & Louis’ names? Are lou & harry aware that this happened? Like they must be-it’s hbo so they probably had to like have some form of permission from lou & harry’s management or them themselves but why would anyone allow that?

@euphoriaHBO bruv you guys are old enough atleast think before you do something, isn’t that what old people tell us think first ? Just be respectful and delete the whole thing. @Harry_Styles @Louis_Tomlinson sorry for all this shit pic.twitter.com/7WCg4o8983

i’ve never watched euphoria and i don’t plan on watching it,, but this shit is so nasty and embarrassing. things like this are the reason why they’re not close anymore. and the fact that they used harry and louis’ real names makes it worse. lawsuit wya ? pic.twitter.com/AWZnciMLfg

RIGHTEOUSNESS OF THE RAGE: Euphoria is a show that’s fully committed to portraying the dark, messy lives of teenagers, and what’s a more realistic reflection of teens’ weird obsessions than their love for explicit, detailed, NSFW fanfic? Throughout their time as bandmates in One Direction, Styles and Tomlinson were often “shipped” together in fanfic about them secretly being in a gay relationship. Larry Stylinson, a portmanteau of their names, became “a widespread conspiracy theory as One Direction grew more popular,” explains Vulture, with fans “overanalyz[ing] every single interaction between the two men.” Apparently it got to the point where Tomlinson said that his relationship with Styles suffered. “It made everything, I think on both fences, a little bit more unapproachable.” So it makes sense that he would be upset to see the fanfic resurrected, but the outrage of the fans themselves is a bit mystifying, considering they’re the ones responsible for hatching the theory in the first place.