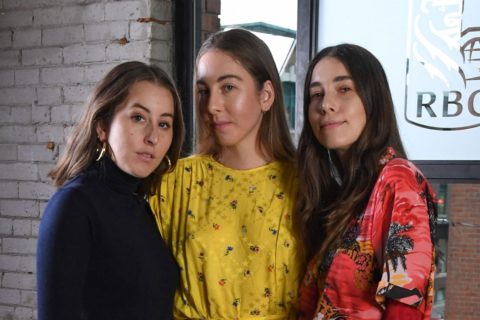 "Can someone get [Timothée Chalamet] on the phone? Does he want to come tonight? Can we invite him? We’re obsessed."

RBC, HAIM and TIFF aren’t a trio of things you necessarily would expect to come together. But when they do? Fireworks. Here’s how it happened: every year at the Toronto International Film Festival, the Royal Bank of Canada, a long-time supporter of the arts and an official sponsor of TIFF, hosts RBC House, a hub for premiere parties, film junkets, panel discussions and bumping music performances. To kick off this year’s festival, they invited a surprise group of guests to take the stage: LA sister band, HAIM.

Neither Este, Danielle nor Alana Haim has been seen on the silver screen, but it turns out the cool California chart-toppers are quite the movie buffs. And so, before their intimate RBCxMusic performance—which included an iconic cover of Shania Twain’s female anthem “That Don’t Impress Me Much”—I sat down to chat with HAIM about all things film. Because who knows what the future has in store? For example, our conversation starts with Este, a bassist and the eldest of the three sisters, boldly saying: “One day I hope to be in one of these movies, one day.”

What’s a movie that always makes you cry?

Danielle: I just watched Book Club on the plane. I just loved seeing Diane Keaton and Jane Fonda…and I cried. We cry on airplanes all the time.

Este: Literally every movie I cry. I cried at The Goofy Movie.

I’ve heard you guys are big fans of The Goofy Movie.

Este: When they’re on stage with Powerline and their doing that dance. It’s this whole father/son thing, it’s perfect. I just can’t.

Danielle: It’s the movie with the best music. I literally only watch it for the Powerline songs.

Which leads into the next category: favourite movie soundtrack?

Este: Selena. Every time. I could literally do it as a one woman show.

Este: That’s like my party trick. The other weekend we were in Palm Springs, and my one friend who knows that I’m really good will be like, “do the Ally scene in Selena,” and I literally am Chris and Selena at the same time.

Danielle: She killed it.

Alana: I wish I had a video camera. This would be great content.

Este: Some people take beer caps off of beer with their teeth. I can do Selena.

Some day I’m sure there will be a biopic about your musical career. Who plays you? Do they have to be sisters?

Este: No. Absolutely not. I don’t think they even have to look alike. I’m trying to think it’d probably be…Oh, who’s that girl in Inglourious Bastards? Mélanie Laurent?

Alana: Yeah. I know who you’re talking about. Of course she picks the gorgeous French actress. Love it. I would pay to see that.

Danielle: I’m going to go with Diane Keaton, because she’s just my fav.

Este: Yeah, she’s unbelievable and so much fun to hang out with.

I’m going to name a HAIM song, and you’re going to tell me which actor should star in the music video. First up: “The Wire”

Danielle: Diane Keaton. She can do anything.

Este: She can do anything.

Alana: She can do anything.

Este: I mean what actress could act that out right now. Natalie Portman?

Este: Oh my god, yes. Can someone get him on the phone? Does he want to come tonight? Can we invite him? We’re obsessed.