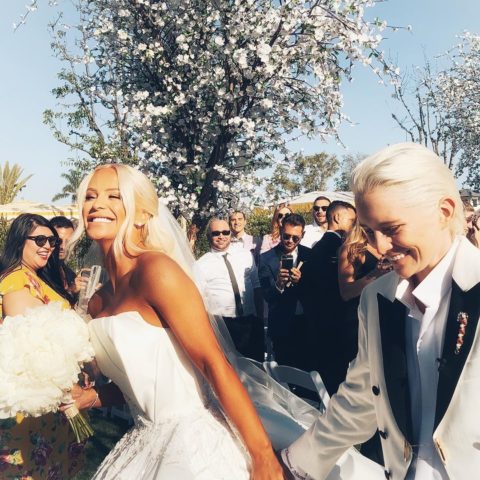 Gigi wore a dreamy white strapless Michael Costello gown and worked with the designer during the process, People said. Gigi also had two other outfit changes throughout the night, which were also custom Michael Costello looks. Nats looked dapper in a white suit with black detailing, designed by her own fashion label, Strike Oil. Despite Gigi’s famous beauty guru talents, her makeup was done by Hilary Montez, and hair styled by Irinel de León.

There were reportedly just over 200 guests in attendance, between friends, family, and industry personalities. Gigi’s father walked the bride down the aisle, as members from the fashion, beauty, YouTube and LGBTQ+ communities, from Caitlyn Jenner to Trisha Paytas, were there to celebrate the newlyweds.

Gigi rose to YouTube stardom in 2013 after sharing her personal stories and coming out as transgender on her YouTube channel. She later met Nats in 2016. The two started dating, and Gigi came out again on her YouTube channel as lesbian. Nats popped the question to Gigi in 2018 during a proposal of epic proportions in Paris, after dating for approximately two years.

Between Gigi’s large beauty guru platform, Nats’ fashion accomplishments, and their combined interests and work in LGBTQ+ activism as a transgender lesbian couple, the two are without a doubt making their mark on the creative industry as a whole.

“What I think is so amazing about Gigi and me, us together as a pair, as a couple in a relationship, is that no matter what we’re doing, if its me supporting her, her supporting me in whatever endeavour, we’re a team and we have so much fun together,” Nats told ABC News earlier this year. “I can’t wait to see what life continues to throw at us.”