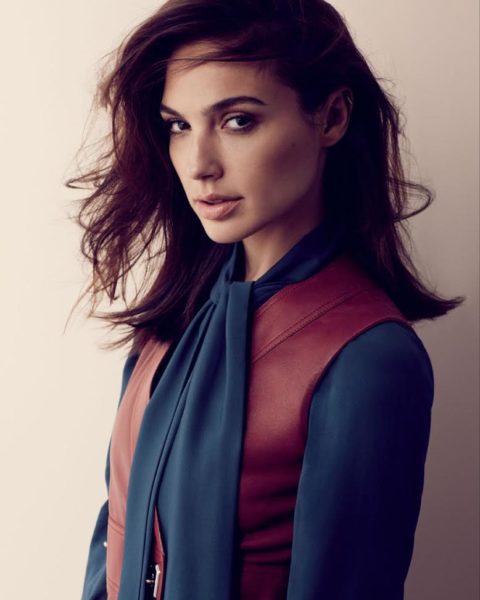 From Pageant Queen to Soldier and Now Actress, Gal Gadot on Her Role as Wonder Woman

“The only game in town.” These are the words Gloria Steinem used to describe her relationship to Wonder Woman when she was a child in the 1950s looking for a female hero to call her own. As a young feminist, Steinem saw Wonder Woman as a lighthouse for those who felt cornered by traditional gender roles, illuminating equality in what Steinem refers to as a looming dark age which restricted so much for so many. “She was the only hero that made you feel good about yourself,” Steinem said in a documentary called Wonder Women: The Untold Story of American Superheroines. “She gave an idea of justice and compassion and friendship among women. It is important to think yourself into someone who is powerful.”

Without knowing it, FASHION‘s August 2015 cover star, Gal Gadot echoes Steinem’s way of thinking. The Israeli actress—who broke the internet this weekend when the trailer for 2017’s Wonder Woman film was unveiled at Comic-Con—believes her portrayal of the crime fighter is intrinsically aligned with the feminist reading of her super powered character.

“She is the ultimate symbol of strength,” says Gadot of the famed female crusader she portrayed in this year’s Batman v Superman: Dawn of Justice. “Never in my wildest dreams did I think I’d grow up to be in a movie playing someone who influenced as many women as she has,” she says, speaking with a slight Israeli accent. When it was first announced, a deluge of internet cynics questioned Gadot’s fit for the role (Olga Kurylenko and Elodie Yung were among the other actresses also considered). Some detractors claimed Gadot’s Israeli background should have disqualified her from playing the character who is often considered an American symbol of freedom. Others stated she was too thin to play Wonder Woman, who was traditionally busty and muscular.

Gadot paid little mind to the internet trolls that challenged her. In fact, none of their criticisms fazed her since she says she’d already experienced negative media attention from the Israeli press when she went for and won the crown title of Miss Israel in 2004. “After they asked me here, in Israel, if I have an eating disorder and why am I so skinny—that my head was too big and my body was like a broomstick—I can take anything. It’s just empty talk,” she told Ynet, an Israeli news site. As for Wonder Woman’s roots, she was always written as a Grecian Goddess from Paradise Island, not from Long Island, NY. And, as Gadot has so succinctly corrected: “The true Amazons had one boob so it [wouldn’t] bother them with their archery.”

When it comes to prepping for the camera, the 31-year-old is just as thoughtful. Rather than drawing from observations of other people she sees, Gadot maintains a much more internal approach. “I relate to the character,” she says. “I always think about how I would behave if I were in their shoes.”

It seems like so much of her life has part of preparing for the role of Wonder Woman. At the age of 20, after Gadot won the Miss Universe Israel pageant and started modelling, the Tel Aviv native was required to put in her military service time. While most would see the experience as a setback of sorts, Gadot became so enamoured with all the techniques she learned that she ended up training sergeants and high-ranking commanders. Thinking back to the time where she was learning how to hold weapons and prepare for combat, Gadot weighs the pros and cons with ease. “It was demanding because you give up your freedom for two years, but there is something special in giving back to your community,” she says. “One day I hope we have peace in the Middle East and everyone is able to live together in harmony. I wish none of the countries in the world will ever need an army, but this is how it goes in Israel. It’s mandatory and I did my part. But the army wasn’t that difficult for me. The military gave me good training for Hollywood.”

Aside from her experience as both a soldier and a beauty queen, Gadot’s life is a world apart from most actresses. Although she divides her time between Los Angeles and various other film locales, her home is in Tel Aviv with her husband, an Israeli business tycoon, and Alma, her daughter (the couple have no plans to move). By focusing on and prioritizing family life, Gadot maintains a highly motivated attitude that helps her cope with hectic shooting schedules.

“Nowadays being a woman is hard because we have to be the best wife, best mother, best worker, best everything!” she says, sounding a little exasperated. “But I truly believe we are more empowered. Men are more women-friendly in this generation…. We’re also stronger, sophisticated and can achieve what we want. That’s what I would like my daughter to know as she grows up.”

Gadot says she learned from the best when it comes to parenting, listing her own mother at the top of her own list of wonder women. Another is Penelope Cruz, whose career trajectory she is most encouraged by.

“[Penelope] stands up for herself and has something to say—she has her own spice, which I love,” Gadot explains. “She is very courageous and also has an accent, but she just goes with it.”

Like Cruz, Gadot has also packed her time with a number of extremely varied projects that will further push the limits of her talent. She is the face of Gucci Bamboo and a campaign model for Castro (Israel’s biggest fashion retailer). Gadot also starred in a comedy called Keeping Up With The Joneses, alongside Jon Hamm and Isla Fischer (she plays a secret agent who comes to wreck havoc on suburbia), and a drama called Criminal, alongside Ryan Reynolds and Kevin Costner.

Gadot cites the latter film as the most mentally challenging project she’s done to date. She plays a woman, Julianne, who loses her husband and must interact with a dangerous convict in order to help solve a crime. “We had a very heartbreaking scene between Julianne and between Jericho [Costner’s character]. Both of them were just breaking down barriers. It was a very emotional scene. I was crying all day long.”

Physically, Gadot is also working hard for the money. She feels she has to work out for two, often referring to her Wonder Woman role as a separate person in our interview. While she has a personal trainer, Gadot works with another Wonder Woman-specialized instructor who is dedicated to getting a superhero bod through weight training (she does Pilates, paddle boarding, TRX and yoga on the on side). While most of us would be complaining about the gym time we’d have to put in, Gadot seems to thrive on doing the groundwork.

“Rule number one for me? Come prepared. When I am prepared, I can tackle everything,” she says before her agent reminds her that her plane to Tel Aviv is leaving soon. “Isn’t that what being a woman is all about?”

Photography by David Roemer (Styling by Zeina Esmail)
Get the best of FASHION in your inbox Thanks for signing up!
The latest fashion, beauty and celeb news delivered right to your email #FASHIONforall Now, check your inbox to complete your subscription
We won’t ever use your email address for anything else
Want even more FASHION? Follow us on social media.