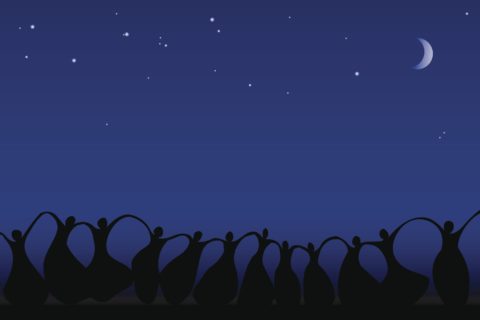 Who’s Most Likely to Join A Cult? We Ask a Former Moonie

"I think we run a risk when we think that only some people could be susceptible to cults."

Cults are having a moment in pop culture right now — and we have a theory as to why. (Spoiler: Trump has something to do with it.) And here’s the thing with our collective cult fascination: after you’ve finished bingeing on hours of content—be it Netflix’s Wild Wild Country, Hulu’s The Path or HBO’s The Leftovers—you’re left with more questions than answers. Who finds themselves in this situation? Could it be you? Are you the kind of person who would be willing to give up your sense of self in hopes of achieving a greater sense of belonging?

In her recently released memoir, To the Moon and Back: A Childhood Under the Influence, ex-Unification Church member Lisa Kohn recounts her gripping journey from Moonie cult kid to keynote speaking #girlboss. Here, we ask her questions that only someone who’s been on the inside could answer.

Do you think everyone is susceptible to cults?

I do believe that everyone is susceptible to cults. Some people may be more susceptible, or more susceptible at certain times, but everyone can be taken in. This is due to a few human traits: 1. We are “hive creatures,” wanting to be part of a group or community, wanting to belong to someone(s) or something. 2. Overall, we also have a need for “meaning” or “understanding.” We want to believe in something (even if it’s “science” or “nothing”) and we, in general, want to have a reason for being or purpose. It’s part of the human condition. Both of these human needs can become even more consuming during times of crisis or transition, and both of these human needs make all of us susceptible to cults.

What kinds of people do you think are most susceptible to cults?

I suppose that if people are more likely to look outside themselves for answers, have less trust in their own thoughts and beliefs, have just suffered a loss such as a breakup or a loss of a job, have a deeper desire for purpose or meaning, have a lower tolerance for ambiguity and a stronger need for absolutes, are disillusioned with life as it is now and looking for something “better” they would be more susceptible – or more susceptible at that time – than other people. However, again, I think we run a risk when we think that only some people could be susceptible to cults.

Do you think there are some positive aspects of being in a cult?

No. I think people experience some positive experiences – the sense of community and belonging, the surety of “knowing the truth” (I always say, there is nothing more intoxicating than knowing you know/have the truth – it is why people fly airplanes into buildings) – but there are no positive aspects of being in a cult. A cult takes your away your sense of self and your ability to think for yourself. It “makes” you do things you would never do if you didn’t believe in the “truths” (lies) that they tell you. I doubt my mother would have abandoned us if she hadn’t become a Moonie. I have to believe that she wouldn’t have let happen to us many of the things that happened to us if she had any ability to think and decide for herself – if she wasn’t brainwashed. The “positive experiences” a cult member might have or the positive emotions they might feel are at such a huge cost, that they lose their positivity. The reverent joy of being around a “messiah” who, in fact, is not a messiah is fake joy – and so much of the true joy and connection of human experience are lost. When we first became Moonies, it was, in many ways, a haven for me from my childhood and experiences before being a Moonie. My mother became less of a hippie and more conservative in her thinking, which was all I wanted at the time. But that being said, you still can’t look at it as a positive thing. Being in a cult may give someone the feeling of having answers and understanding, but they are fake answers and understanding, so it would be fake positive aspects, and one loses so, so much and suffers in so, so many ways.

When does a close-knit community become a cult? Where do you draw the line?

How do you feel about the term “cult survivor” — does it feel like an accurate label?

I never actually used – or heard – the term “cult survivor” until very recently. I was at a cult awareness conference, specifically in a room of other Second Generations (people who were born into and/or raised in a cult), and I heard the term and then introduced myself as a cult survivor. It felt – and feels – very accurate. Growing up in a cult, and perhaps just as much, leaving a cult (especially when you grew up in a cult) is something that you survive. It is a hard, traumatic, scarring way to grow up, and leaving is one of the most difficult and scary things one could ever do. You walk away from everyone and everything you know, believe, and love to find a life on your own. That is something that one survives.

That being said, again, I believe not only in PTSD, but in PTG – Post Traumatic Growth. I think growing up in a cult gave me an incredible amount of resilience, and I have chosen to live a life not just as a survivor, but as a thriver.