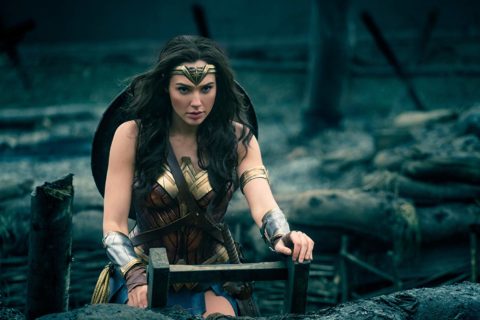 What Is the Female Gaze, and Can It Reshape Pop Culture?

Do women view and represent the world differently, or is that just a social construct? We tried to get some answers.

There’s a scene in Wonder Woman where Gal Gadot charges across a battlefield toward enemy fire, whipping off a heavy cloak to reveal her iconic gold and red breastplate and blue leather skirt. As the camera pans her body, lithe and bronzed, women in theatres around the world—including me—found themselves wiping away tears instead of rolling their eyes. Oh, the things this body can do: defy death, deflect bullets, withstand blows, save a village. Yes, it’s exalted—but for its strength, agility and grace, not its shape. Was this the female gaze at work?

So much has been written about the male gaze that it has become a kind of catch-all phrase we use to talk about the depiction of women in pop culture and how that depiction strips them of agency, personality and, well, clothing. If that’s what the male gaze does, is the female gaze simply the opposite?

That isn’t as easy a question to answer as you might think. The term “male gaze” was coined in 1975 by British film theorist Laura Mulvey, who, in a landmark essay titled “Visual Pleasure and Narrative Cinema,” wrote, “In a world ordered by sexual imbalance, pleasure in looking has been split between active/male and passive/female.” Over the course of the essay, Mulvey expertly points out how in cinema, female characters have historically served as “the bearer of meaning, not maker of meaning,” existing, essentially, to advance the male protagonist’s story, to serve as the mirror in which the man’s morality, motives and emotions can be easily reflected. Like, we know Rocky’s a good guy because of how gentle and caring he is with Adrian and we know Liam Neeson’s Bryan is a wonderful human being because of the lengths he’ll go to protect his daughter (and her virginity).

“The argument [of feminist film theories like Mulvey’s] was, more or less, that the editing process of the film would bind the spectator to the male protagonist’s view of things—hence the notion of the male gaze.”

“The argument [of feminist film theories like Mulvey’s] was, more or less, that the editing process of the film would bind the spectator to the male protagonist’s view of things—hence the notion of the male gaze,” explains Kay Armatage, professor emerita at the University of Toronto’s Cinema Studies Institute and Women & Gender Studies Institute. Film directors achieved this through the classic “shot reverse shot,” which involves a shot of the person looking (typically male, as most film protagonists tend to be) and then a shot of the person being looked at (typically female) from the point of view of the previous shot.

The landscape of cinema may have changed drastically since the ’70s, but it’s still dominated by men. According to a 2017 report commissioned by USC Annenberg School for Communication and Journalism at the University of Southern California, only 4 per cent of the top 1,100 films made in the last decade have been directed by women, so it’s no surprise that we’ve been conditioned to view the world—and women—through the lens of men. This male hegemony is by no means limited to cinema; as more women enter the fields of art and entertainment, it’s inevitable that we begin to question how their world view might come to define the “female gaze.” At the same time, it’s fair to question whether contrasting gazes exist at all or if they’re just a social construct.

“In many ways, it’s almost a moot point whether or not the male gaze is a real thing that can be felt or tracked. Because of the way it impacts our lives, it’s something that is constantly manifested, constantly felt.”

“In many ways, it’s almost a moot point whether or not the male gaze is a real thing that can be felt or tracked,” says Carmen Hermo, associate curator at the Brooklyn Museum’s Elizabeth A. Sackler Center for Feminist Art. “Because of the way it impacts our lives, it’s something that is constantly manifested, constantly felt. [It can be] oppressive, in many ways, to have what is an assumed universality of this white, cis male viewpoint. But even if these dichotomies of male and female gazes aren’t helpful for everybody, it’s one of those things that once you see it, you can’t un-see it. Once you know about the Bechdel test, or you’ve seen a photograph by Cindy Sherman or Renee Cox—artists who trace the history of the male gaze on women’s bodies, on black women’s bodies in particular—you can’t un-see what the feminists have shown you.”

So what can the female gaze teach us? Do women, who have historically never taken on the role of oppressor, depict human interaction differently? Do men, in their primordial desire for dominance, find comfort in establishing an object-subject relationship? Is a power imbalance inherent within the male gaze?

“The work that Mulvey did was known as ground zero for [positing] that a scopophilic relationship with a subject onscreen isn’t neutral,” says Kiva Reardon, founder of cléo, a digital magazine that explores film from a feminist perspective. (Scopophilia, by the way, is a Freudian term that means “pleasure in looking.”) “For me, thinking about the male/female gaze in 2019 is more about bringing it back to the questions of who’s doing the looking, how they’re doing the looking, why they’re doing the looking and what impact that kind of looking has on the viewer.”

“When it comes to the nuts and bolts of what the ‘female gaze’ is, when you see art that is directed by or created by women or queer, non-binary people in an environment where they can be free, the treatment of things is so different.”

Sonia Saraiya, a television critic for Vanity Fair who has written extensively about how female directors and creators have shaped cult hits like Transparent, The Handmaid’s Tale and The Deuce (a show that, she writes, is “at least in part about the commodification and production of the male gaze in pornography”), believes that the female gaze, rather than being a simple reversal of the cinematic trope in which women are viewed as objects (whether as sexual pin-ups or as plot-propelling devices), seeks to avoid objectification completely.

“When it comes to the nuts and bolts of what the ‘female gaze’ is, when you see art that is directed by or created by women or queer, non-binary people in an environment where they can be free, the treatment of things is so different,” says Saraiya. “Instead of seeing bodies as something to be consumed, maybe everybody finds a way to act with agency.”

But it’s important to note that it’s not just women or queer people who are capable of shaping art with this view. A perfect example of this is 2018’s critical darling The Favourite. Directed by Yorgos Lanthimos, the film stars Olivia Colman, Rachel Weisz and Emma Stone as three female protagonists driving a complex emotional plot forward while the men flit in and out of scenes in increasingly outlandish costumes and wigs—not objectified but pretty irrelevant. “We tried to portray them as human beings, because most of the time, obviously—because of the prevalence of the male gaze in cinema—women are portrayed as housewives or girlfriends or objects of desire,” Lanthimos said at a panel during the Venice Film Festival, where the film premiered.

Clearly, the male gaze does not lurk within everything orchestrated or shaped by men. It stems not from male genitalia but from a patri­archal view that can be (and often is) shared by both men and women. For Reardon, interrogating the gaze—any gaze—is more important than determining whether it’s male or female, a heteronormative binary that seems particularly reductive as our gender vocabularies continue to expand to include non-binary and gender-fluid identities.

“When you have an idea of fluidity, then that expands what all of these questions and aesthetics can be,” says Reardon. “And so we can still have this discussion of the politics of looking, but it doesn’t need to fall one way or the other. I don’t think there’s no such thing as a patriarchal way of looking, but the female gaze doesn’t have to be the exact antithesis of that. It can exist on a continuum.”

“I don’t think there’s no such thing as a patriarchal way of looking, but the female gaze doesn’t have to be the exact antithesis of that. It can exist on a continuum.”

It doesn’t provide much clarity, but to conclude that the female gaze exists on a continuum, or that there’s no one way to define it, may be the most honest way forward. While the male gaze has monopolized the visual arts for over a century, making it easier to pinpoint and define, the female gaze—whether as a cinematic or an abstract concept—is still in its nascent stages. So how constructive is it, really, to try to make sense of it?

“To me, it does add value,” says Saraiya. “For example, Killing Eve is about women looking at one another, and I think that’s real; I think women do assess one another in sexual and non-sexual ways, which are both present in the show. Most of the time when we’re talking about the male gaze, we’re talking about stories that don’t really feature that many cisgender female characters, let alone trans characters or gay characters or non-binary characters. I think there’s value to considering how a female perspective can change things.”

To me, the clearest distinction one can safely make between the male and female gazes is that the former establishes a clear object-subject relationship that places female characters at an emotional, narrative and sexual disadvantage while the latter steers away from it. But knowing what it isn’t doesn’t help us understand what it is.

“For all its hashtag-friendliness, the female gaze is, perhaps, not a very useful phrase. Lacking a theoretical foundation, it must either be defined in terms so broad that they are basically useless or so narrow that they are as restrictive as the male gaze they purport to critique.”

“For all its hashtag-friendliness, the female gaze is, perhaps, not a very useful phrase,” writes Kinfolk magazine editor Harriet Fitch Little in the Financial Times. “Lacking a theoretical foundation, it must either be defined in terms so broad that they are basically useless or so narrow that they are as restrictive as the male gaze they purport to critique.”

While it’s hard to deny that women bring different experiences and ways of looking at the world to their art—as does anyone with an experience different from the status quo—it’s also hard to categorize their vision as “different” or to quantify that difference in any meaningful way when the number of women spearheading projects is still so limited. “We just don’t have the evidence,” says Armatage.

Without that evidence, we’re left to rely on something more visceral, something that tells us that what we’re seeing is subversive in some way, that it’s challenging the patriarchal world view in which we’ve grown accustomed to living. Whether that’s Ryan Coogler’s Black Panther, whose cinematographer, Rachel Morrison, is the first female cinematographer to be nominated for an Academy Award (for 2017’s Mudbound), or Patty Jenkins’s Wonder Woman, it’s impossible to deny that there’s something at work that just feels different—something with the power to leave us in tears even though we may not know exactly why.

Photography via Warner Bros. Pictures
Get the best of FASHION in your inbox Thanks for signing up!
The latest fashion, beauty and celeb news delivered right to your email #FASHIONforall Now, check your inbox to complete your subscription
We won’t ever use your email address for anything else
Want even more FASHION? Follow us on social media.