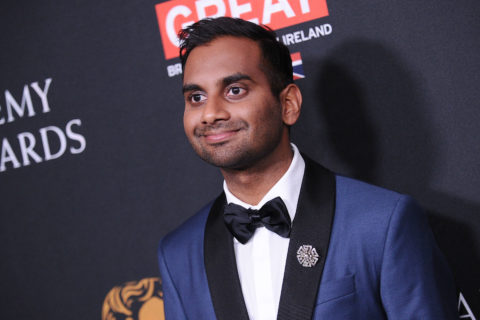 How Should We Feel About Aziz Ansari?

The ranks here at FASHION are not filled with men. Shocking, right? But there are one or two (there are actually, literally, two). Naturally, when a question about male behaviour arises it’s only fair that one of them stand in for the members of his gender and provide some insight. The open letter by French women denouncing #MeToo was our last topic of conversation, and today, we have some concerns about the recent allegations against Aziz Ansari. Two of our staffers—one male, Greg Hudson, and one female, Pahull Bains—talk it out.

Only this story seems to have divided the Internet more than previous ones of sexual misconduct. A good portion of people seem to question whether publishing this story was reckless.

Whenever one of these stories comes out, it provides a moment to reflect on my own behaviour to check if I’ve done something similar without realizing it. I’ve definitely had fewer opportunities than Ansari has had, but I don’t think I’ve been in the same situation. I shook hands with my girlfriend after our second date because I wasn’t certain a kiss was welcome. But even still this story frustrates and annoys me. I don’t want to be on the wrong side of the issue, but this doesn’t seem like an example of systemic sexism so much as an example of miscommunication, and as such, it does seem unfair to publish it now. The allegation alone puts Ansari on a list with all the other accused men, and that doesn’t seem like a proportionate response (where my The American President fans at?). But maybe I’m not seeing something. Why shouldn’t I be perturbed?

PB: Well if you’re missing something, then apparently I am too. Though I hate to play the “she could’ve done this” or “should’ve said this” game because we can’t purport to know how we’d react to certain situations until we’re in them, it’s what I keep coming back to here. If Ansari’s actions were making her feel uncomfortable, and she wasn’t ready to do any of the things he seemed to be in the mood for, she—sorry—should’ve just left. (The way it’s recounted doesn’t make it seem like a dangerous situation from which she might have been unable to extricate herself.) And I totally agree with you that the main issue here seems to be miscommunication. It’s possible that “Grace” thought she was communicating more strongly, both verbally and non-verbally, what her feelings were, but that’s super subjective—signals aren’t always as obvious as one might think. And the fact that she continued to engage with Ansari sexually, even though she didn’t want to, clearly sent out mixed messages that he was unable to parse the way she might have wanted.

GH: The premise of these articles is to get both sides talking–although that makes it sound more antagonistic than it is. We’re usually on similar pages, if not the same one. What’s important is the conversation, which we’re trying to do publicly.

It sounds like we’re even more on the same page than usual. We agree that this probably wasn’t the story that needed telling–which I suspect is why, out of all the publications that would love to break a story about a beloved comedian acting hypocritically, this was published on a website that also encourages women to avoid having a DTR conversation with their men by seeing if they’ll respond to a sexy invitation even if they’re menstruating. But, whether we agree with this story being published or not, there’s a lesson about consent here, right?

I’m not going to make assumptions about “Grace”’s motives (although I can’t not make assumptions about Babe’s motives.) Instead, let’s assume that both Aziz and “Grace” are telling the truth: she felt like she was being clear with her non-verbal cues, and as such felt pressured, ignored, and violated; Aziz honestly didn’t pick up on these cues, and was concerned and truly sorry–and told her so privately–once she made her feelings clear. I have to assume that the vast majority of men don’t want women to feel violated and coerced–and not just because they don’t want to get in trouble. They care about their partners, and their partner’s pleasure. Plus, enthusiastically consensual sex is more satisfying for everyone. Yes, there are times when either party disengages during sex–I think assuming that that’s a gendered response buys into the dangerous stereotype that only men care about sex–but for the most part we all want our partners to be as into what’s happening as we are.

So what should men take away from this?

PB: If this story teaches us anything, it’s that consent isn’t a black and white concept. It’s all well and good to say we need to teach our sons that no means no, but how do you explain the nuances of a situation in which the girl (or guy) might not say no outright, but does attempt to show you his or her discomfort by pulling away at certain moments or during certain acts? Of course, I acknowledge that saying no is not an option in situations that are inherently dangerous or violent. But that doesn’t seem to be the case here, and if Twitter is any indication, this isn’t a one-off, rare case either. Countless women recall similar experiences in their own lives, situations in which the lines between yes and no were blurred. Now whether that’s because you’re not quite sure how you feel, you’re not certain how far you want to go or you simply changed your mind, it’s your prerogative to pull back at any point. I do think though—and this might not be a popular opinion, but it’s one of the big takeaways from this Ansari situation—that women need to be clear about what’s making them uncomfortable and where they draw the line. (Clearly, men suck at reading signals!) That said, once that’s been established, the onus then falls on the men to do the decent thing, which is: be respectful of how your partner (or date or whatever) is feeling. How do we make THAT happen?

GH: That’s a good question. You’ve set me up nicely to fix sexism forever. Here I go!
To be clear though, we’re talking about avoiding problems the spring up between two well-intentioned people because of nebulous consent. Solving sexual assault and harassment in general will require a much bigger shift, but maybe adjusting how we think about sex can help everyone understand consent with more nuance.

1. Sex begins long before the bedroom (or wherever you’re planning on doing it). Men especially need to stop thinking about it like a prize they get at the end of a date. It’s something you build together. So, pay attention to signs throughout the date. Let the other person in on what you’re hoping. Not so early that you seem like a creep, but maybe before the clothes come off.

2. Forget onuses. (Is that a word?) We’re not perfect yet, but hopefully both men and women understand that protection is everyone’s responsibility. So is consent and communication. We are as responsible for each other as we are for ourselves, when it comes to sexy times.

3. Perspective: this will not be the last time you have sex. If one partner is not into it, or not into it that day, there will be other opportunities. You aren’t going off to war. You’re not dying in the morning. And while human interaction is usually better than working solo, I’ve been told that there are places on the internet to help with, ahem, self care.

Maybe that’s all too earnest. But I choose to believe that most of my gender would rather be a little too earnest than be remembered as a monster, or give another person trauma.

PB: Ah, it was nice to live in that sweet, earnest world for a minute! Hopefully it’ll become a reality one day. I don’t think we can forget onuses though (onii?). When it comes to sexual dynamics, men hold all the power, and it’s this skewed structure that’s responsible for so much of this mess. When one person in the equation has a clear advantage in terms of sheer strength, it puts the other person in a perpetually vulnerable state. Women have to look out for themselves in ways that men rarely have to (constant vigilance!). It’s this fundamental structural imbalance that unfortunately—and sometimes inadvertently—sets the tone for so many male-female interactions, and I wish men would make more of an effort to empathize with what it’s like to be on the other side of that equation. Stories like this one of Ansari and “Grace”’s encounter, though problematic in the way it’s been presented, will hopefully lead some men to re-examine this power structure and the role they play in it.

Photo by Jason LaVeris/FilmMagic
Get the best of FASHION in your inbox Thanks for signing up!
The latest fashion, beauty and celeb news delivered right to your email #FASHIONforall Now, check your inbox to complete your subscription
We won’t ever use your email address for anything else
Want even more FASHION? Follow us on social media.