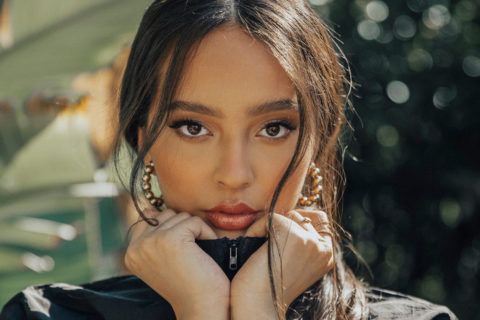 "John is lovely and such a pleasure to work with... I feel so honoured that he's on the song," says the Moroccan-Canadian singer.

Growing up in Carman, Manitoba, Morocco-born Faouzia Ouihya was always surrounded by music. “It’s a huge part of our culture,” the singer says. “In the car my dad would always play his favourite Moroccan artists and I’d be singing along. There was a lot of Arabic music being played and a lot of pop music when we listened to the radio so it was a nice blend of both.” The 20-year-old singer’s early passion for music led to piano, guitar and violin lessons; awards in local and national singing competitions; and eventually a record deal. This summer, Faouzia dropped her debut EP Stripped and last month she released “Minefields,” a duet with Grammy-winning musician John Legend.

Although still at the beginning of her career, the Moroccan-Canadian singer already has 1.8 million followers on Instagram, with roughly the same number of monthly listeners on Spotify. In addition to John Legend, Faouzia has worked with other big names in the music biz such as David Guetta and Kelly Clarkson. We talked to her about her early success, how she handles social media, and more.

How would you describe your musical style?
It’s very emotional and intense but I also love to have music that’s fun and has a really nice rhythm and powerful words. I think my voice will always have an Arabic sound to it. Some people, even before they know where I’m from they say ‘you have a Middle Eastern tone to your voice.’ It’s really funny. Growing up hearing beautiful voices like Umm Kulthum or Fayrouz, I would always try to imitate the way they did their trills and now it’s ingrained in my voice forever.”

Tell us about your collaborations with David Guetta and Kelly Clarkson, and how they came about.
Working with David Guetta a few years ago was such an honour. It was at the very beginning of my career. I had put up some videos on YouTube and released a few songs but not very many. I found out about the song through someone at a label, who called me and told me that David Guetta has an album coming out and there’s a song on there that he thinks I would fit well on. I heard the news in school during my lunch period, and I was so anxious to go home and record it. They were really excited when they heard the song, and so I flew to LA and re-recorded it a bunch of times to get it right and that’s how the song ended up on the album.

With Kelly Clarkson, when I heard that she was making this project in five different languages and they wanted me as the Arabic artist, I was over the moon. I grew up listening to Kelly! I got to work on that with my parents because they were guiding me in the right direction with the Arabic translation. I got to meet Kelly; she was super sweet and very energetic and bubbly. It was such a pleasure to work with her.

Congratulations on “Minefields.” How did this duet with John Legend come about?
I got the song from a songwriter named Sam Martin. When I heard the song I fell in love with it. I started to rewrite it to make it more my own but the main essence of the song is very much there. And then I recorded it, in a little studio in the basement of my home. I had my microphone from when I was 12-years-old and that’s what I was recording on. We had intended for it to be a solo song but then we started to think, ‘what if there was a big, beautiful male vocal on it?’ We started to name names and John Legend’s name came up, so we reached out to him. We didn’t expect him to come back so soon and to love the song. He sent his vocals in and we all fell in love with it, it was so beautiful.

What was it like working with John?
It was so surreal. I couldn’t believe it till the song was out. John is lovely and such a pleasure to work with. I’ve gotten to speak to him a few times. He was really curious about how the song was written, and we asked each other questions about the process. Everything was done virtually, and I’m so happy with how it turned out. John recorded on top of my vocals, and what I really loved about what he did was he made it sound very much like a proper duet. He intertwines his voice with mine at times and sometimes he’ll take the lead and sometimes I’ll take the lead. It’s a beautiful mixture of our voices where we both are in harmony. I feel so honoured that he’s on the song.

We talked about your musical style but how would you describe your fashion style and signature look?
My signature look would be oversized clothing. When I’m at the studio or going out, I like wearing something that’s really comfortable. I love oversized jackets and hoodies, they’re my favourite thing to wear. I love statement jewellery, whether it’s earrings or rings or bracelets. I like to look put together but like I could still take a nap (laughs). A mix between laidback and done up.

You have 1.8m followers on Instagram. But I’m sure in addition to the fans there are also a lot of social media trolls. How do you deal with that?
There’s so much love and appreciation that I just focus on that. When someone is being a troll or trying to be negative online, the first thing I think is either they’re having a bad day or they’re just trying to get a reaction out of you and maybe they’re even secretly a fan. You never know what someone’s intentions are. If someone’s being positive and loving, that’s the message that I wanna see and will reply to. Because I just want to spread love and spread happiness. If you’re being negative I just wish you a better day tomorrow.

photo by Jess Spohr
Get the best of FASHION in your inbox Thanks for signing up!
The latest fashion, beauty and celeb news delivered right to your email #FASHIONforall Now, check your inbox to complete your subscription
We won’t ever use your email address for anything else
Want even more FASHION? Follow us on social media.