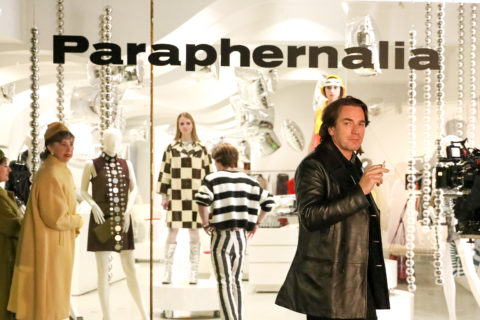 Ryan Murphy released a first look at his upcoming series Halston
Iconic American fashion designer Roy Halston—most closely associated with 1970s glitz and glam—is getting a biopic courtesy Ryan Murphy (the creator of The Assassination of Gianni Versace). Ewan McGregor plays Halston, who rose to prominence when he designed a pillbox hat for Jackie Kennedy in 1961, going on to launch his own ready-to-wear line in 1969 and becoming the designer of choice for the Studio 54 set in the decade that followed. In a since-deleted Instagram post that shared a teaser of the Netflix series, Murphy wrote, “After a long 20 years of twists and turns, the limited series Halston starring the fantastic Ewan McGregor began production today. I am so proud of our director and leader Dan Minahan, and Christine Vachon of Killer Films. I am thrilled to be producing this great and meaningful show with them and Alexis Martin Woodall and Pamela Koffler.”

Ewan McGregor as Halston and Rory Culkin as Joel Schumacher shooting Ryan Murphy's Halston series and OMFG WE ARE LIVING FOR THIS SHIT ARE YOU KIDDING ME?https://t.co/TZmbEmwkry

Sandra Oh announced a new project with Amanda Peet
Award-winning BBC show Killing Eve may have been renewed for a fourth season but its star Sandra Oh has signed on to another concurrent project, this time on Netflix. Amanda Peet is set to write, produce and showrun the series, which will be co-executive produced by Peet’s husband David Benioff and D.B. Weiss, the duo behind HBO’s Game of Thrones. Titled The Chair, the six-episode dramedy revolves around the head of a university’s English department, played by Oh.

'Killing Eve' star Sandra Oh (@IamSandraOh) will play the title role in a six-episode Netflix dramedy from Amanda Peet and the creators of #GameOfThones. All the details: https://t.co/7lMgFji2uv

Grimes released her new album
After her last album back in 2015, Canadian musician Grimes is back with her highly anticipated fifth studio album, Miss Anthropocene, which she dropped at midnight on February 21. The album features 10 tracks, three of which had already been released as singles in 2019: “So Heavy I Fell Through the Earth,” “Violence,” and “My Name Is Dark.” Grimes calls the sound of this new album “ethereal nu metal,” and according to Pitchfork, the “convoluted” narrative of Miss Anthropocene is “about personifying climate change through a fictional cosmology of demons and villainesses giddily celebrating global warming as a force of good.”

Gemma Chan received Max Mara’s Face of the Future award
Following in the footsteps of Emily Blunt, Katie Holmes and Zoe Saldana, British-Chinese actress Gemma Chan is the latest recipient of the Women In Film Max Mara Face of the Future award. According to the brand, Chan was selected for her “confidence and poise with effortless glamour” for this prize, which is awarded annually to a woman “experiencing a turning point in her career.” Following her breakout role in Crazy Rich Asians, Chan’s upcoming projects include Marvel film The Eternals alongside Kumail Nanjiani, Salma Hayek and Angelina Jolie, and Let Them All Talk with Meryl Streep and Lucas Hedges.

Honoured to be the recipient of the 2020 Women In Film x #MaxMara Face of the Future Award. Thank you for inviting me to your beautiful show @maxmara

Ottawa Bluesfest announced its full 2020 lineup
Ottawa music festival RBC Bluesfest has revealed the full lineup for its 2020 program, which features Rage Against the Machine, blink-182, Daniel Caesar, Charlotte Day Wilson and Marshmello among many others. The 10-day festival in July also features one very special performer: Alanis Morissette, who will be making a stop in LeBreton Flats as part of her Jagged Little Pill anniversary tour. Tickets for the festival are now on sale.

Photo by Jose Perez/Bauer-Griffin/GC Images
Get the best of FASHION in your inbox Thanks for signing up!
The latest fashion, beauty and celeb news delivered right to your email #FASHIONforall Now, check your inbox to complete your subscription
We won’t ever use your email address for anything else
Want even more FASHION? Follow us on social media.