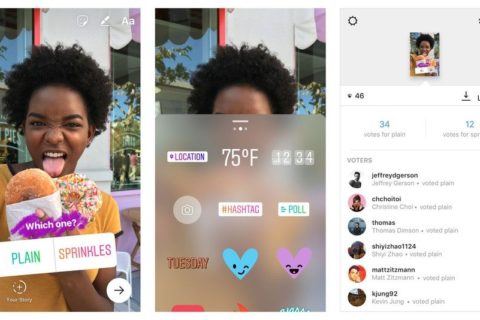 Everything that Upset the Internet this Week

TGIF-LW! (Thank God It’s Friday of a Long Weekend.) It’s Thanksgiving weekend here in Canada, which means turkey, stuffing and table talk with your extended family. What controversial topic will your Facebook-loving aunt bring up when you ask her to pass the gravy? Here are a few of the stories that made waves on the web this week.

THE STORY: Instagram unveiled a fun new feature that allows users to create “Instagram polls” in their stories. You ask a simple two answer question, have your followers (and anyone creeping your profile) vote, and then you get your results. Unlike Twitter polls, however, Insta polls are not anonymous. Which people only started to discover after voting…

OH MY GOSH I DIDNT KNOW PEOPLE COULD SEE WHAT I VOTED ON THEIR INSTAGRAM POLE ???

oooooooo boy apparently your answers on the Instagram story polls are revealed to the person, I have done some damage

RIGHTEOUSNESS OF THE RAGE: Uh oh. In the past 24 hours, I’ve weighed in on a lot of polls from a lot of people I don’t know. Why didn’t this app update come with an instruction manual? *Face palm*

THE STORY: Donald Trump made his first visit to Puerto Rico since Hurricane Maria ravaged the island two weeks ago. During his four hour stay, the American president stopped by a supply distribution point to throw packaged paper towel into a crowd of hurricane survivors.

Pitbul and Fat Joe managed to send planes of supplies to Puerto Rico and Trump brought a few paper towels on Air Force One.

When trump threw those rolls of paper towels at people who lost everything, you know what I read it as? "Clean up your own mess".

Trump is throwing paper towels into a crowd in Puerto Rico. This is gross. We deserve an actual leader. https://t.co/vTwW8vJGGE

RIGHTEOUSNESS OF THE RAGE: Are the Puerto Ricans suppose to clean up this mess with a household clean up cloth? These families—who FYI are American citizens— have been living for nearly two weeks without electricity, and many are struggling to find food, clean water, and medical support. This isn’t a reality TV show, Mr. Trump. Tossing aid goods into a crowd of suffering people is tone-deaf.

Karl – really! This is not Chanel – Perhaps better suited for TacoBell uniforms pic.twitter.com/TJ6qeI44Lv

Stop it with the classless plastic crap already… we voted NO yesterday… geez is Chanel going broke?

RIGHTEOUSNESS OF THE RAGE: We’re all going to be wearing transparent accessories next season. Just you wait and see.

THE STORY: An investigation by the New York Times has found decades of sexual harassment accusations against Harvey Weinstein. The Hollywood mega-producer has made at least eight settlements to women.

Bury yourself in a landfill, @HarveyWeinstein. You are absolute human garbage.

SEXUAL PREDATOR Harvey Weinstein is one of the most-thanked people of all time from the Oscars stage..Hollywood all knew BUT CHOOSE SILENCE

RIGHTEOUSNESS OF THE RAGE: Weinstein has long presented himself as a liberal champion of women, having raised money for Hillary Clinton and endowing a university faculty chair in Gloria Steinem’s name. But in the always wise words of Oscar winning actress, Brie Larson: “As always, I stand with the brave survivors of sexual assault and harassment. It’s not your fault. I believe you.” Here’s hoping Hollywood cuts ties with Harvey, and that this tired “art vs. artist” debate is put to rest once and for all.