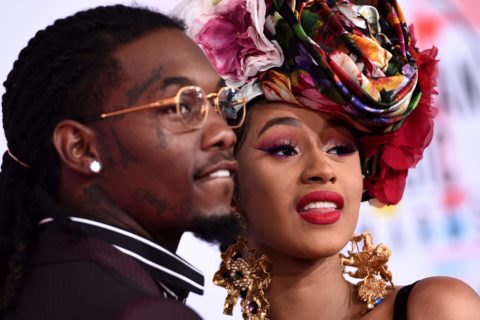 What is the web-o-sphere angry about this week? A rapper’s grand gesture of forgiveness, a genie with a top knot and a white man in a Black Panther sweater. Here’s everything you need to know.

THE STORY: Since Cardi B announced her split from Offset on December 5, the Migos rapper has made it clear that he’s on a mission to get her back. He tweeted “FUCK YALL I MISS CARDI,” shared an Instagram video where he apologizes profusely, saying, “I only have one birthday wish, and that’s to get my wife back,” and then, on December 15, he interrupted Cardi’s performance as the first ever female headliner at Rolling Loud festival.

Offset ambushed the stage during the concert, wheeling out three lavish floral displays that read, “Take me back Cardi” as part of his ploy to win back her affection. “I just wanna tell you I’m sorry, bro,” he said into a microphone in front of an audience of thousands, “And furthermore I love you.” After exchanging some words in private, the flowers—and the ex—were taken off the stage.

Cardi B was the first FEMALE headliner in Rolling Loud history! Honestly, it’s so fucked up that he even did that. Like, you really gonna be out here taking up her spotlight and making her set about you? Nah bro.

Offset disrupting Cardi's performance is like your ex running up on. you at your job in the middle of a meeting. This is not acceptable or cute. Or romantic. It's creepy and unstable.

Anyone else troubled by this? Because this is harassment. And the fact that the folks putting on this festival were complicit in sabotaging and humiliating their first female rapper @iamcardib headlining for clicks is unethical. Nobody won. https://t.co/JDJrwwrlYj

RIGHTEOUSNESS OF THE RAGE: Is there a place in modern culture for men to make grand gestures of forgiveness? This is the question that sparked thousands of tweets, hundreds of angry Instagram DMs in Offset’s inbox and dozens of well-researched thought pieces. “Stalking behaviours and emotional boundary–breaching have been normalized as romance and desire through popular-culture written and produced by a system controlled by men,” Brittney Cooper wrote for The Cut, “Patriarchy works by making women think that the man who will override her will is the one who loves her most.”

There are, of course, appropriate times and places to get on your knees and beg for forgiveness. Public displays of affection are self-serving, and when performed at someones place of work, are completely inappropriate. Offset’s apology ambush was not romantic, sweet or vulnerable, it was aggressive, undermining and manipulative.

But then things got more complicated. Before the incident, the music festival’s Twitter account reportedly tweeted: “Whatever happens tonight on the @audiomack stage, it’s going viral. Make sure you’re there tonight for Bardi.” Which led people to question: did the music festival set all of this up? In response to these claims, Rolling Loud co-founder Tariq Cherif told the Los Angeles Times, “Cardi’s management was in on it, it had nothing to do with the festival. The artist is in full control of the stage and they determine who gets on and off.”

The World Gets a First Look at Will Smith as Genie

THE STORY: Entertainment Weekly has released a first look at the Disney’s live-action Aladdin remake. We got a glimpse at Will Smith’s Genie, who is slimmed-down, not blue and features “Top Knot Ponytail Vibes.” (This is a quote from Smith himself. I would never willingly describe a hairstyle in that way.)

genie! my first wish. i wish that i'd never seen this. pic.twitter.com/R8JSMG52C4

Will Smith’s genie hair in the live-action #Aladdin is going to be a major source of anxiety for me in 2019. pic.twitter.com/FwG44LHiUj

RIGHTEOUSNESS OF THE RAGE: Calm down, everyone. Your childhood nostalgia is still safe. Smith has confirmed to his 26.3 million Instagram fans: “Yes, I’m gonna be BLUE! :-) This is how the Genie is in Human / Disguise Form. My character will be CGI most of the movie.”

THE STORY: Forever 21 has designed and manufactured a holiday-inspired ‘Wakanda Forever’ sweater, inspired by the Marvel film Black Panther. To promote the product, they put it on a white male model with platinum blonde hair and shared to the photos to its Twitter account and website.

They got a super pale, blond, blue-eyed model in a Wakanda Forever sweater… ???

I wanna speak to your advertising department, @Forever21. Someone approved this and thought this was going to work. ? https://t.co/aWefYUeBfY

RIGHTEOUSNESS OF THE RAGE: Twitter user Gomolemo Mohapi‏ encouraged people to back off, writing, “Stan Lee CREATED WAKANDA and BLACK PANTHER in the 1960s to PROMOTE DIVERSITY in pop culture. 50 years later, we’re getting butthurt because a white male is wearing a Wakanda Forever sweater? Ahh come on, let’s be mature here.”

Forever 21, however, still felt it was appropriate to issue an apology and pulled a product. “Forever 21 takes feedback on our products and marketing extremely seriously,” the company said in a statement to The Hollywood Reporter. “We celebrate all superheroes with many different models of various ethnicities and apologize if the photo in question was offensive in any way.” As far as corporate outrage reactions go, I’d say that’s pretty solid. As a company, you don’t get to decide what does and doesn’t trigger an audience. So pull the image, recognize your customers, apologize and move on.