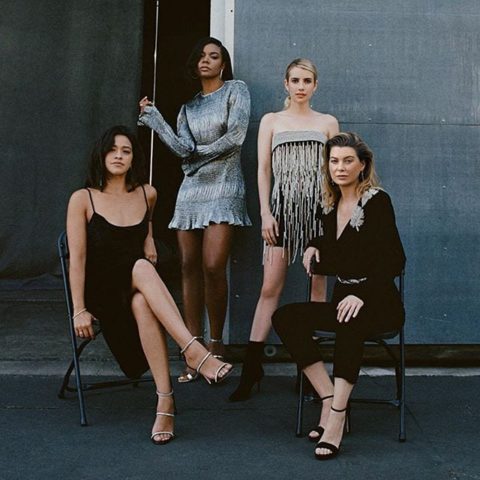 “We Created the Problem”: Ellen Pompeo Says It’s Up to White People to Speak Out About Diversity Issues

To celebrate their “Women in Television” issue, Porter magazine gathered four queens of the small screen to speak out on representation in Hollywood. The panel included the likes of Ellen Pompeo, Gina Rodriguez, Gabrielle Union and Emma Roberts, and together they discussed issues ranging from the gender pay gap, to how race plays a role in their industry.

Around fifteen minutes into Porter’s discussion, however, the tables were unexpectedly turned on the magazine. “This day has been incredible,” Pompeo began. “But I don’t see enough colour. And I didn’t see enough colour when I walked in the room today.” As viewers, we’re unable to see the crowd Pompeo is addressing behind the cameras, but it’s easy to imagine. It’s a scene, Pompeo states, that is all too common across Hollywood. “I think it’s up to all productions to make sure that your crew looks like the world we see,” she noted.

1) White people sometimes ask me how they can be an ally. @EllenPompeo puts on a master class in how to be one.

I love Gabrielle Union's face here, like she FINALLY doesn't have to be the one saying this. FINALLY.

Even Dictionary.com shouted out Pompeo for being the ultimate example of an ally.

Ally. A person, group, or nation that is associated with another or others for some common cause or purpose.

“Wow,” Rodriguez and Union both said after Pompeo finished speaking and together, the four actresses clinked cups in salute to the comments.

Rodriguez went on to mention that she–from her much different perspective–had been working on trying to find the courage to speak as openly as Pompeo had about those same issues. Union agreed, “It wasn’t something that was lost on me. I just did not have the bravery to call it.” She brings up times where she’d wanted to make comments in the past but didn’t feel comfortable. “I’d never think to say it in this space. I wouldn’t want to appear ungrateful and be the ungrateful brown person.”

“And that’s why it is my job,” Pompeo responded.