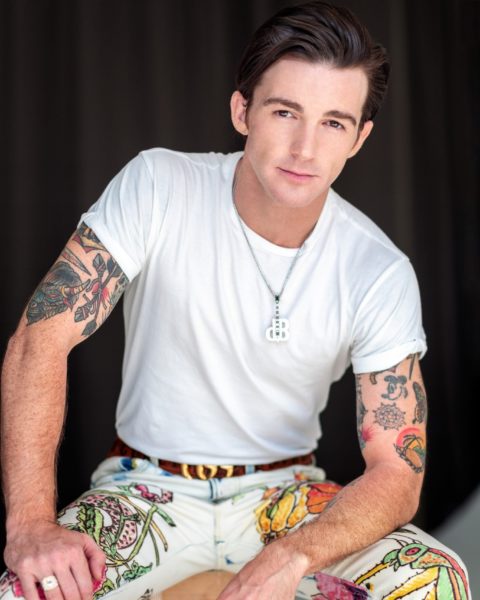 Even as a child actor, Drake Bell always seemed like a music artist ready to break out. From singing skits on The Amanda Show to wielding a guitar on Drake and Josh, it’s no surprise that Bell has started releasing some killer tracks. After all, he’s the guy behind Drake and Josh’s catchy theme song, “I Found a Way.”

We got a chance to chat with Bell about everything from refusing to sign with a label, to his biggest inspirations, to the Nickelodeon days that catapulted him to fame.

It seems like music has always been a part of you but how did make that official jump from acting into music?

In the past year and a half I’ve really just been like, well if I’m going to really get to where I want to be, whether it’s television or music, I’m going to have to go 100% into one or the other. And I think I just have a lot more fun making music. I love being out on the road and being able to control what I create. You know, it’s not just sitting on a set waiting to be called, sitting in a trailer, auditioning… If I shoot a movie for eight months, then I wait nine months to see it and then it takes another two months to come out. It’s a long process and I’ve been doing that for so many years. I’ve also been making records for so long and every time I’d get away from the TV studio I’d be in the recording studio making a record and then going on tour. For me, going back to TV was almost like, ‘Aw man, school’s starting back up?’. Being on the road and playing music, there’s nothing that compares to that.

Because you’ve been doing this for so long, do you think your sound has changed over time?

I was heavily influenced growing up by The Beatles, The Beach Boys, Queen… you know all these big vocal groups and harmonies. So my first couple of records were very influenced by that. The new records… I don’t know, it’s so hard to say where you’re drawing inspiration from because it’s not really a conscious thing. It’s just what happens in the studio. My music is super eclectic and it’s always evolving. I guess I get bored! It’s like the same thing as sitting in that trailer, I’m like ‘Okay, cool that was awesome, but let’s try to do something different!’. I never want to repeat myself.

Who do you look up to right now in the industry?

Post Malone is awesome. I like his stuff. I really love Rufus Wainwright. I always loved punk rock growing up and I kind of see Lil Xan and Lil Pump as being not so much hip-hop, but more punk rock. Like whenever I go to a Pump or Xan show, I’m more reminded of the Sex Pistols than the ’90s hip-hop that I grew up with. There’s something rebellious and angsty that really draws me to that new trap stuff.

You’re doing this all without a label behind you. Why did you decide to go that route?

Just control, you know? I just want to be able to make the records I want. Like the other day, I made a cover of “Gucci Gang” and it was just for fun. I was able to just release it and not have anybody say anything about it. I can put out records when I want, how I want, tour when I want and make the album artwork look like I want. I mean, yeah there’s a lot of opportunities that labels bring, but you just become a puppet. I’ve been signed, I’ve been on labels and released records that way… but things have changed, especially in this day and age. I couldn’t just talk directly to my fans back in the day. I couldn’t go on Instagram Live and be like ‘Hey, what do you guys think of this new song?’. I can directly connect with [my fans] now and it’s been a lot more rewarding and artistically gratifying.

From all the new stuff that you’ve been producing, do you have a favourite song that you’ve worked on?

Probably “Call Me When You’re Lonely”. I really dig that one.

Why is that one your favourite?

I don’t know, it’s just cool vibes. It’s got a cool drop and I love Lil Mama’s part on it.

I saw that you recently played at a tribute concert for the victims of the PULSE nightclub shooting in Orlando. Why was that an important cause to you?

I grew up in Los Angeles in the entertainment industry and I also have a lot of family in Orlando. That community and the fact that it happened in Orlando, it was just one thing on top of another thing. I had family members who had friends and family that were at the event and it also happened the night after Christina Grimmie was shot, so I was still reeling from that. When I started to hear about the PULSE shooting, I thought they were just continuing to talk about what had happened the night before and then I was like wait, this is something that’s active right now. It was just a lot of things compounding and it really hit home.

Do you think you’ll ever get back into acting?

Yeah, definitely. It’s when I have time. Right now I’m focusing on the music but I’ll definitely still act. I’d love to do something with Josh [Peck] eventually, that’d be really cool.

There have been so many reboots happening recently, from Charmed to The Hills. Do you think Drake and Josh could get another shot?

I think it’d have to be something more interesting than, ‘Oh, Drake and Josh go to college’, you know? And knowing Josh, I think he would be down with it too but it would just have to be something different that isn’t what everybody expects. You can’t just give the audience what they want. If we did something together then it would be something completely new, but a the same time, an homage to the past.

I read that you went to go visit the old Drake and Josh house to find it had been destroyed, how did that make you feel?

It was kind of a bummer but we only shot there a few times because that was the exterior. What’s a bigger bummer is when I go down to Nick on Sunset, which was our actual home. That’s where we shot and that is just gone. They just tore it all down. That’s where I spent every day of my youth. But yeah, going up to the house and seeing that it was also gone was a bummer. Like the Brady Bunch house is still there! I mean, there should’ve been some kind of historical society… the Smithsonian should have been involved or something!

Drake Bell by Jon Malinowski Grooming by Todd Harris Shot at Unnamed Studio, NYC
Get the best of FASHION in your inbox Thanks for signing up!
The latest fashion, beauty and celeb news delivered right to your email #FASHIONforall Now, check your inbox to complete your subscription
We won’t ever use your email address for anything else
Want even more FASHION? Follow us on social media.