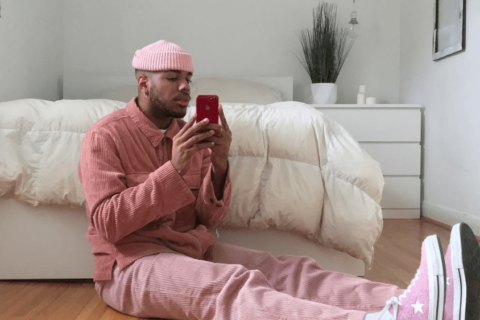 You made it through to a new day!! #keepgoing #keeppushing #yougotthis

Positive vibes can be hard to come by — especially on social media. But if there’s one man to prove that the energy you put out into the world will return to you, it’s Toronto-native Donté Colley. The 21-year-old content creator kicked off 2019 with a taste of viral victory after posting a motivational new year’s dance video to Instagram. The clip, set to the wii sport theme song and synced with perfectly-placed emojis and a superimposed messages of optimism, has over 500,000 views and 100,000 likes — and that’s just adding up the numbers on Donté’s page. The video has been reposted Leslie Jones, Will Sasso and over a dozen major entertainment outlets, shooting Donté’s shining star straight into the stratosphere, and bringing an impressive number of followers (117K and counting, more than double the count from when I interviewed him two days ago) to his page.

“I woke up the day after I posted the video, and someone had sent me a link to a Twitter account that had reshared it — and it already had a million views,” Donté tells me over the phone, “I had a decent following before, which I was definitely okay with because I really try not to take the Internet too seriously. I’m just trying to make it fun for myself and for anyone that follows me. But there’s been a very positive reaction to what I make these past few days. I really didn’t expect any of this.”

When the Internet moves, it moves quick. Donté, who splits his time between studying digital communications at the University of Guelph Humber, content creating and working as an inventory associate at Aritzia, has actually been making emoji edits on his self-filmed dance videos for over a year. (Which means there’s an entire catalogue of Donté videos for you to scroll through, enjoy, and flag as a favourite for later viewing. You’re welcome.) Donté’s expertly timed videos seem like the work of a tech prodigy, but he explains his process is somewhat simple: “I take a song and I either take one video, and I’m happy with it, or I’ll take three to five different videos of the same thing. Once that’s done, I kind of just throw it into my Premier Pro and my After Effects and add all of the graphics in. I figure out the story as I’m editing it, cause that’s how I make it fun for myself.”

These motivational dance videos are posted amidst aesthetically curated, colourful #OOTD shots, which means that between serving positivity pep talks, Donté is serving street style inspo. It’s the message behind his uplifting hashtags, slick moves and crafty edited videos, however, that seems to really be sticking with audiences. “Instagram is everybody’s highlight reel, it’s where everybody is living their best life and doing incredible, amazing things,” Donté says, speaking to the objective of his page, which started with him creating fun videos for his friends. “There are points where social media can become very negative, very overwhelming, and just not an overall great place. We tend to question what we’re doing, where we see ourselves, what our purpose is. You need to recognize that you are your own person, and you have your own road to ride on. So stop comparing yourself to other people and be true to who you are.”

Donté believes that with the Buzzfeed appointed moniker the “Motivational Dancing Guy” and the endless stream of comments affirming his work, he’s exactly where the universe intended him to be. “I’ve grown into what I believe my purpose is, which is to make people feel better, because that’s something that is lacked, especially on social media,” he says. “I just want to be myself and be as honest as possible with these people who have come into this journey with me. I want to share as much knowledge from my own experiences of going through really hard and really low points. I want to elevate others and show them that there is light at the end of the tunnel, as hard as it is to sometimes believe. You will get through. You have the support.”

Photography via Instagram/@donte.colley
Get the best of FASHION in your inbox Thanks for signing up!
The latest fashion, beauty and celeb news delivered right to your email #FASHIONforall Now, check your inbox to complete your subscription
We won’t ever use your email address for anything else
Want even more FASHION? Follow us on social media.