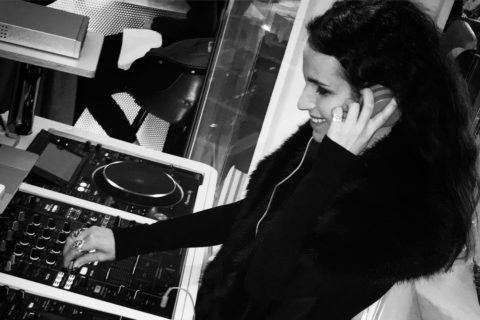 A Day in the Life of Samantha Michelle, a Toronto-born DJ Who’s Opened For Mark Ronson

"I typically work on playlists in the mornings. It gets me too excited—if I try to do it in bed at night I won't sleep."

Samantha Michelle’s life has taken her all over the place, figuratively and literally—studying religion and foreign policy at NYU, acting in plays and learning about European cultural history at Oxford, running a vintage shop in Toronto (where she grew up), writing and directing her own short films, and most recently, DJing at high-profile gigs and developing a female-focused film festival in New York.

“Opening for Mark Ronson for the Wall Street Journal at their Cannes Lions closing party was amazing,” she says of her favourite recent gigs, when I meet her over tea at a Toronto cafe. “I DJ’d at Drag on Queen here in Toronto—I got to open for a bunch of drag queens, which was really fun. I also work a lot with the Morrison Hotel Gallery in New York. I did a CBGB tribute show for them and Debby Harry turned up. I was like, do I play Blondie in front of Blondie? I think I should!”

Aside from DJing gigs, she has directed two short films (her most recent, In the Campfire Light, will be premiering at the Ojai Film Festival in California in November) and is part of the creative team behind Female Voices Rock, a female-focused film festival that will hold its inaugural edition in New York in October. Here, a behind-the-scenes peek at a day in her very busy calendar.

8am
Every day is so different, which is one of the things that I love about it, but on average I get up around 8am. I live in New York now, but I’m probably only there about half the time. (I travel a lot and also come to Toronto around once a month, which is great because it’s where I’m from and I get to see my family and friends.) So I get up around 8 and usually go and get a coffee or a tea—I used to be a smoker but I quit smoking six months ago so I still need to go through the morning rhythm of the walk to just get fresh air, see what it feels like outside. I try to avoid Starbucks as much as I can; it’s nice to go to independent places. There’s a great place called Newsbar near me, in Greenwich Village, which I love. Then I get home and open my laptop.

9am
I normally do about an hour or so of emails, phone calls, text messages, just catching up on stuff. As creative director of the film festival, I’m managing our partnerships, so I’ve been doing a lot of outreach to different women’s organizations through people in my network and the film world who care or can help spread the word. I’m also in post-production on my film which again is all really working from home—phone calls, emails with different people and the team. I like working from home because I’m on the road so much. I’d say most days I’ve not had a shower or put on any makeup until maybe 2, 3, 4 in the afternoon.

11am
I typically work on playlists in the mornings. It gets me too excited—if I try to do it in bed at night I won’t sleep. I get really jazzed about it, so it’s something I’ll normally do in the mornings before I work out.

Noon
After that I usually will go to the gym, or do a yoga class or do Pilates or something. If I don’t feel like working out I will go for a long walk and call my dad and he’ll be walking the dog in Toronto, and I’ll be going in circles around Washington Square Park.

In my next life I think I’d like to come back as a teddy bear ? #allthingsfluff #sundayfunday #newyorkcity #nyc ♥️ ?: @chris_britton

2pm
Then normally I’ll eat. I’m not a very good cook, but I’m a total creature of habit when it comes to food, so I’ll go and pick up an omelet from Grey Dog. I live really close to an independent equivalent of Whole Foods and they have big salads and stuff. Sometimes if it’s a slower-paced day and I have time to make a salad at home I will, but usually I’m just picking something up.

3pm
In the afternoon I’ll usually have a couple of meetings. I tend to try and make my meetings in the afternoon as much as I can so I have an uninterrupted morning at home. For the film festival, I’m also working on amazing sponsorships so there’s a lot of back and forth emails, meetings and conversations with different write-ins and partners and people who want to join the coalition, and just managing all of those relationships.

Thank you so much to the legend that is Jeff Samutt @sammutjeff for having me back on @sxmcanadatalks #canadatalks @siriusxm #siriusxm ?such good fun chatting all things dj’g, soul music, the history of rock and roll, and of course – singing the praises of my campfire gang! #inthecampfirelight ?♥️ #radio #interview #canada #homesweethome ?? #toronto #dj #music #soulmusic #rockandroll #actress #filmmaker #film #nyc #shortfilm #dreamteam #femalefilmmaker #lovetothecrew

6pm
If I’m not DJing I usually see friends and I like to do stuff like go to the movies, go to the theatre, or go for dinner. My friends and I really like this place called Fish on Bleecker Street in the West Village. They do a really great wine and oysters special. I love ordering in too. Because I’m out so much, there’s something so nice about getting breakfast delivered to you at 11 o’clock at night (I often eat dinner quite late). I love the movies, I take myself to the movies all the time if I just feel like getting out. I love going to the theatre, that’s one of my favourite things. I recently saw this fantastic play called What the Constitution Means To Me which is a one-woman show about how the constitution has failed to serve and support women. It’s phenomenal.

8pm
If I’m DJing, I’m pretty low maintenance when it comes to getting ready. If I spend more than five minutes on my makeup, I’ll just keep on putting on more eye-shadow or more blush or whatever, and then the next thing I know I’m like, uh, what happened to my face. And I hate looking like I’ve been too made up; it feels really un-me.

In terms of what I’m wearing, I’ll never make a decision until it’s five minutes before I leave the house. Comfort is really important, so I don’t wear shoes I can’t walk in or clothes that are too tight. I never want to feel like I want something to be over, just so I can be comfortable again. I love super tall shoes but I won’t wear high-heels that are flat under the toe, because I just feel like I’m going to fall over. So wedges were life-changing for me. I think my style’s quite ’60s and ’70s-influenced, so I like big tall wedges, silky flowy things, colourful things. I like things that are a bit androgynous, like a pantsuit. I have tiny boobs, so I take absolute advantage of it and wear crochet tops and dresses strategically pinned together with safety pins.

9pm
I make a really conscientious effort to make sure that at least one night a week I just have no plans and hangout with myself and do whatever I feel like with myself, usually it means sitting on my sofa eating vegan ice cream and watching TV. I wander into a different space creatively in the evenings because I’m not getting people texting and emailing me. So this is the time to write, and work on scripts, and read and just dream things up in my head.

Photo via instagram.com/samanthamichelle.x
Get the best of FASHION in your inbox Thanks for signing up!
The latest fashion, beauty and celeb news delivered right to your email #FASHIONforall Now, check your inbox to complete your subscription
We won’t ever use your email address for anything else
Want even more FASHION? Follow us on social media.