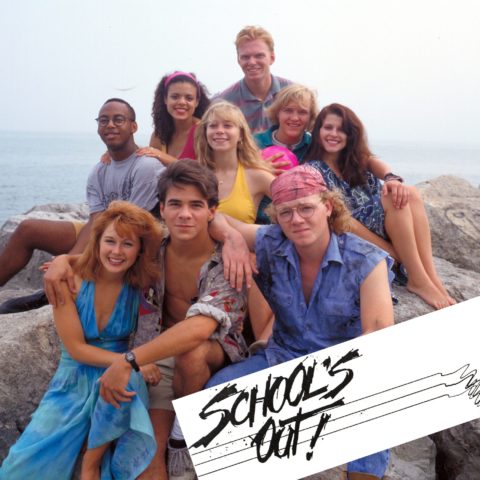 Degrassi: School’s Out is 25 Years Old and is Just as Iconic as Ever

If you’re a Canadian Gen-Xer and have never watched Degrassi Junior High or Degrassi High, I don’t know what’s wrong with you. Featuring a cast of real kids rather than actors (which often lead to terrible, so-bad-it-was-good acting), Toronto locations and episodes that tackled heavier issues than most teen shows of the time would go near (getting pregnant, testing positive for AIDS, and committing suicide), it was something we could nerdily claim as our own.

But when the show aired it’s 90-minute series finale, School’s Out in January 1992, we were gifted with a truly iconic piece of Canadiana. Not only did it buck from convention by not tying up everything nicely after graduation, it went dark, with Joey Jeremiah cheating on his girlfriend Caitlin all summer with Tessa (they made out in his Trans Am in the parking lot of Gerrard Square), Tessa getting an abortion, and Wheels (played by the late Neil Hope, RIP) driving while drunk, injuring class valedictorian Lucy and killing a two-year-old in the process. Adding the perfect amount of fromage was bad hair and early ’90s fashion, all set against the backdrop of cringey Canadian music like Harem Scarem, The Box, Gowan and Images in Vogue (OK, I have a soft spot for “So Careful”). Perhaps best of all, it was the first time the f-bomb was uttered on Canadian television, in reference to said shagging with Tessa.

“It was a ballsy way to go out,” said a staff member of The Royal Cinema in Toronto, which hosted a 25th anniversary screening this past Friday, organized by Pat Mastroianni, who played Joey. “Believe it or not, we thought nobody would come out,” said Mastroianni. Instead, the first night sold out, so a second night was added and a total of 600 people showed up, some from as far as California (and no, not super fan Kevin Smith). Mastroianni also organized a VIP bus tour, visiting key locations that were used on the show with a final stop at the screening, where former cast members Stefan Brogren (Snake), Stacie Mistysyn (Caitlin) and Kirsten Bourne (who played Tessa, and whom Mastroianni hadn’t seen in 25 years) were in attendance for a Q&A, autographs and photos. “I sat in the theatre with everyone and laughed along with them and cringed with them,” said Mastroianni. “It’s cheesy, but the movie still still stands up and people enjoy it for what it is.” And dude, that’s why we’ll never stop loving it.