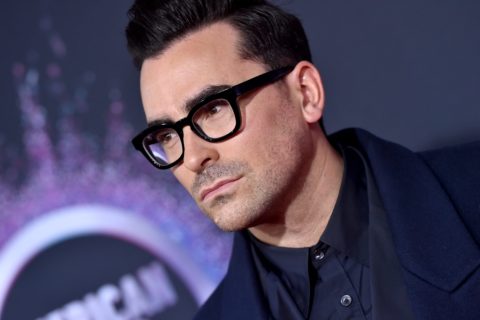 So, Dan Levy Might Be Working On an Eyewear Line

He also talked fashion, food and of course, Schitt's Creek on Vogue's 73 Questions.

Vogue has knocked on the doors of some of the world’s most famous people, from Margot Robbie to Cardi B to Priyanka Chopra, to ask them a series of rapid-fire questions. This week, the magazine turned its lens on to Dan Levy and his airy, light-filled home in Los Angeles.

Over the course of 15 minutes, Levy—who just wrapped up the final season of beloved TV series Schitt’s Creek—answered questions about everything from his favourite pizza topping (pepperoni) to his favourite designer (Dries Van Noten) to his favourite store in Japan (Kapital). He also shared some anecdotes from the Schitt’s Creek set, nearly teared up talking about a gift his father Eugene Levy gave him on the last day of shooting, and revealed one fashion opinion he disagrees with David Rose on.

When asked what he’s currently most excited about, he took viewers over to a table by the window on which sat two handsome pieces of luggage—one in an embossed hunter green and the other a rich tan. “I’ve been working on something and I guess Vogue is the place to show it to,” he said, snapping the leather boxes open to reveal row upon row of sunglasses and eyeglasses. “Don’t look too closely, they’re just samples but it’s a little project I’ve been working on.”

Hopefully we’ll get more details on the super-secret project soon but in the meantime, watch the full video below: