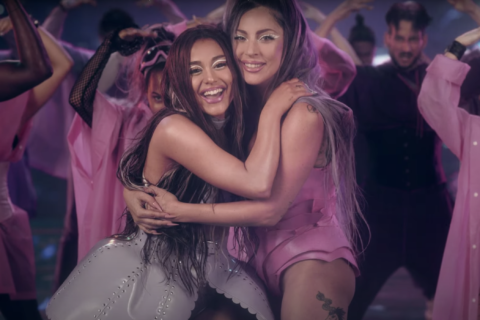 Lady Gaga and Ariana Grande released the video for their joint single, Rain On Me.

Lady Gaga and Ariana Grande released a single
The second song from Lady Gaga’s Chromatica album is out now, and it’s a collaboration with none other than Ariana Grande. The two pop music mavens have teamed up on “Rain On Me,” whose lyrics, according to Gaga, are “about an analogy of tears being the rain.” In a conversation with Apple Music’s Zane Lowe, she said, “And you know what it’s also a metaphor for, is the amount of drinking that I was doing to numb myself. I’d rather be dry. I’d rather not be drinking, but I haven’t died yet. I’m still alive. Rain on me. Okay, I’m going to keep on drinking. This song has many layers.” The video, which dropped on Friday afternoon, features the two, wearing latex bodysuits and babydoll dresses, dancing in the rain against an intergalactic backdrop.

A new meme went viral
If you spent any time on the internet this past week, you would’ve noticed endless variations of a certain meme popping up. The “My plans 2020” meme features two contradictory photos side by side, one representing your optimistic expectations for the year, and the other representing the sad reality. In a year during which we’ve faced an unprecedented global crisis, everyone’s got a version of this to share.

Sia adopted two teenage boys
The Australian musician revealed on an interview with SiriusXM earlier this week that she adopted two 18-year-old boys last year. “They were ageing out of the foster care system,” she said. “Yeah, and I love them.” She didn’t name them in the interview but shared that they have been finding quarantine challenging, just like everyone else. “They are both finding it pretty difficult, one more so than the other,” she explained. “But they’re both doing things that are really good for them right now, that are really helpful. They’re really doing a lot of educational stuff that’s good for them.”

.@Sia has adopted two teenage sons who were "aging out of the foster care system" https://t.co/5Mm9XwnzG2

And ICYMI: Beyonce, JLo and Taylor Swift are joining this year’s virtual graduation ceremonies to help celebrate the Class of 2020.

Image courtesy Interscope records
Get the best of FASHION in your inbox Thanks for signing up!
The latest fashion, beauty and celeb news delivered right to your email #FASHIONforall Now, check your inbox to complete your subscription
We won’t ever use your email address for anything else
Want even more FASHION? Follow us on social media.