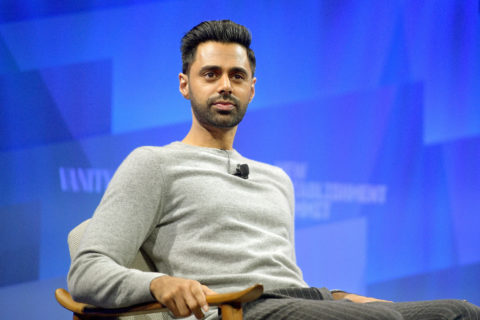 Hasan Minhaj's Patriot Act is back this weekend, the Banff World Media Festival is going virtual, and more.

Hasan Minhaj’s Patriot Act announced its return
On his Netflix show Patriot Act, Hasan Minhaj has tackled everything from Amazon’s hegemony to the fast fashion industry. In the midst of a pandemic that’s forced us to retreat inside our homes, his voice has has been sorely missed but the comedian is returning with a special seven-episode run on May 17. Look out for a new episode each Sunday, starting with Episode 1, “What Happens If You Can’t Pay Rent?” According to The Hollywood Reporter, Minhaj is filming all the episodes from his home in front of a green screen, with the show’s signature graphics being produced remotely.

WE'RE BACK! See you Sunday for new episodes of @PatriotAct. We’ll have the green screen figured out by then. pic.twitter.com/Hk3x2Y74ju

Canadian filmmakers launched a COVID-19 project
A group of Canada’s most esteemed filmmakers are participating in a capsule collection film project entitled Greetings from Isolation. Created by industry veteran Stacey Donen, the project aims to find “inspiration and enlightenment from our shared human experience of isolation under COVID-19.” New and original works are being filmed in isolation from filmmakers like Anita Doron (The Breadwinner), John Greyson (Lilies), Sadaf Foroughi (Ava) and André Turpin (Un Crabe Dans La Tête). Starting May 11, new films are being released online at Greetingsfromisolation.com.

Tickets for The Atelier Collective’s first virtual conference went live
On June 17th, The Atelier Collective will be going virtual with its popular annual conference focusing on women in business. This year’s keynote speakers include author Elizabeth Gilbert, Olympic ice dance champion Tessa Virtue and Etsy trend expert Dayna Isom Johnson. Small businesses have been hit especially hard during the COVID-19 pandemic, so the conference will cover topics tailored to support female entrepreneurs during this time, such as rebuilding, transformation and the power of pivoting. Tickets to The Atelier: Digital 2020 are now available for purchase here.

The Banff World Media Festival announced a virtual 2020 festival
Originally scheduled to take place from June 14 to 17 at Fairmont Banff Springs, the Banff World Media Festival was cancelled for the first time in 41 years due to the COVID-19 pandemic. In lieu of IRL events, the festival is going online, with a 2020 Virtual Edition offering a slate of masterclasses, panel discussions and roundtables. Starting May 26, the festival is offering the majority of its programming free of charge, with special speakers including Jennifer Connelly and Daveed Diggs, stars of the upcoming Netflix series Snowpiercer; actress and writer Sharon Horgan; and Dahvi Waller, creator/showrunner of Mrs America, a new miniseries starring Cate Blanchett. Find details of the lineup announced so far here.

From May to September, join us for an inspiring schedule of interactive video sessions and virtual networking events.

And ICYMI: there are some celebrity-filled virtual graduation ceremonies happening this weekend.

Photo by Matt Winkelmeyer/Getty Images for Vanity Fair
Get the best of FASHION in your inbox Thanks for signing up!
The latest fashion, beauty and celeb news delivered right to your email #FASHIONforall Now, check your inbox to complete your subscription
We won’t ever use your email address for anything else
Want even more FASHION? Follow us on social media.