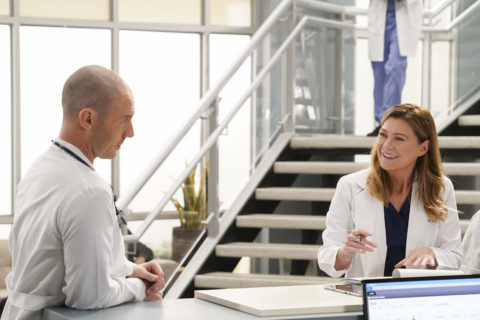 Here's why Grey's Anatomy, Glastonbury and the Cannes Film Festival made headlines this week.

Grey’s Anatomy donated its medical gear to hospitals
Executive producer of Grey’s Anatomy’s, Krista Vernoff, is sending all of the medical drama’s unused gowns, gloves and masks to Los Angeles hospitals running low on essential supplies. Another show she works on, Station 19, is set in a fire station and equips its characters with N-95 masks, which are now being shipped off to healthcare workers who need them urgently. Fox’s The Resident has also reportedly sent a shipment of hospital gowns, face masks, gloves and other medical supplies to an Atlanta hospital.

Amy Adams joined Instagram
This week, Amy Adams finally joined Instagram, and her very first post on the platform is for a good cause. The Oscar-nominated actress has partnered with Jennifer Garner to launch #SaveWithStories, which provides “a spot to watch your favourite celebrities read your favourite children’s books.” Through this initiative, the stars hope to support a new fund for a combined effort between Save the Children and No Kid Hungry, which addresses the food shortage and educational needs of children impacted by the coronavirus. For her inaugural post, Adams read from Dinosaur Princess, a story written by her nine-year-old daughter Aviana, with illustrations by her husband Darren Le Gallo.

I’ve decided to finally join to shine a spotlight on kids across the country who need our help and support during this difficult time. My friend @jennifer.garner and I are launching @SAVEWITHSTORIES – a spot to watch your favorite celebrities read your favorite children’s books. We are galvanizing as a community to support a new fund for a combined effort between SAVE THE CHILDREN and Share Our Strength’s NO KID HUNGRY (and a big thank you to our founding publisher, Scholastic♥️). ⁣ ⁣ THIRTY MILLION CHILDREN in the United States rely on school for food. School closures will hit vulnerable communities hard and @savethechildren and @nokidhungry are on the ground and ready to serve. They just need our help! ⁣ ⁣ These funds will help us make sure that families know how to find meals when schools are closed, support mobile meal trucks, food banks and other community feeding programs, provide educational toys, books and worksheets, and support out-of-school-time programs to help kids make up for lost time in the classroom. ⁣ ⁣ If you can manage a one time gift of $10, please text SAVE to 20222. If another amount would work better for you, please visit our website—link in bio. There is no maximum and there is no minimum—together we will rise and together we can help. #SAVEWITHSTORIES

The Friends reunion was postponed
The eagerly awaited Friends reunion special for HBO Max was supposed to be filmed this month but has been postponed due to the coronavirus outbreak. According to The Hollywood Reporter, “the unscripted special was set to be filmed next Monday and Tuesday on the show’s iconic and former home at Stage 24 of the Warner Bros. Studio lot in Burbank.” Production has been delayed until at least May, with no formal rescheduled date determined at this time. Other streaming platforms and channels have also suspended filming, including Netflix and Apple.

CBC announced a weekly Movie Night series
In response to the postponement of the NHL season due to the threat of the coronavirus, CBC is now hosting Movie Night in Canada, a celebration of acclaimed Canadian films back-to-back on Saturday evenings beginning at 7pm EST on CBC and CBC Gem. Movies on the lineup include Race, a Jesse Owens biopic starring If Beale Street Could Talk breakout star Stephan James, Mr Hockey: The Gordie Howe Story, and The Right Kind of Wrong, a rom-com featuring Catherine O’Hara in a supporting role.

CBC is hosting MOVIE NIGHT IN CANADA, a celebration of acclaimed Canadian films back-to-back on Saturday evenings beginning at 7 p.m. (8 AT, 8:30 NT) on CBC and CBC Gem. Read the full press release on our Media Centre: https://t.co/Wd4pzdsCAM pic.twitter.com/iyHrvjO4iI

More cultural events were postponed or cancelled
Following news of the Met Gala’s postponement, the Cannes Film Festival in France and Glastonbury music festival in the UK have also revised their plans. Cannes, previously scheduled to run between May 12 and 23, will likely be pushed to late summer, while Glastonbury, which was to run from June 24 to 28, has been cancelled altogether. According to the organizers, tickets for this year will roll over to next year. North America’s largest documentary film festival, Hot Docs, previously scheduled for an April 30-May 10 run in Toronto, has been pushed to a later date in 2020, while the Bonnaroo music festival has been rescheduled for September.