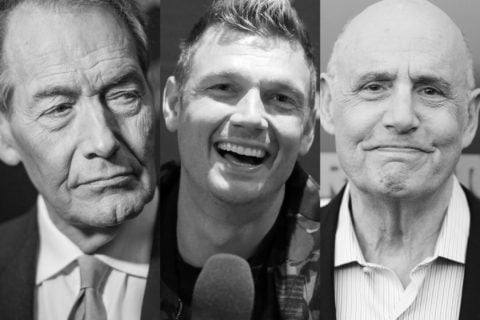 How Should We Feel About Comebacks in the #MeToo Era?

The ranks here at FASHION are not filled with men. Shocking, right? But there are one or two (there are actually, literally, two). Naturally, when a question about male/female dynamics arises it’s only fair that one of them stand in for the members of his gender and provide some insight. Our last topic of conversation was about the concept of ‘the redistribution of sex’ as a response to the incel movement and today we’re talking about the comebacks of men who’ve fallen from grace in the #MeToo era. Two of our staffers—from the men’s corner, Greg Hudson, and from the women’s, Pahull Bains—talk it out.

Greg Hudson: A few weeks ago there was a story that got passed around about how disgraced interviewer and person I first heard about in a Treble Charger song, Charlie Rose, was going to be making a comeback by hosting an interview show where he talks with other men who were taken down by the #MeToo movement (not without reason). The news was not well-received. And while that example seemed particularly tone deaf (but really, tell us more about how hard it was to be called out for abusing your power…), generally it didn’t seem like enough time had passed for these men to be talking about reclaiming their Patriarchal Thrones. I had been meaning to talk to you about it, actually, but then the news cycle moved on and there were other things to be outraged by.

There are always more things to be outraged by.

If you were on the Internet last week, particularly the parts of the Internet frequented by older millennials, you would have seen the new Backstreet Boys video. They released a single! The first time in like five years! And they dance, even though they are very clearly not Boys anymore!

You’ll recall–or maybe you won’t–that Nick Carter was among the first chunk of allegations after the Weinstein story broke. A former member of the girl group DREAM, which I oddly don’t remember (were they the American equivalent of Sugar Jones?), accused Carter of raping her nearly 20 years ago. He denied it, of course, saying that he thought they were in a consensual relationship. She even filed a police report though.

Then! Netflix released the new season of Arrested Development starring Jeffrey Tambor, who was accused of inappropriate behaviour by women on the Transparent set and was fired from the show because of it, despite the fact that he was the Trans Parent at the centre of the family drama. Not only has Tambor returned to our screens, but according to an article on Deadline yesterday, Netflix has submitted his name for Emmy consideration.

And finally, Deadline recently published a story about Pixar’s John Lasseter preparing to take his old job back after stepping down for six months because employees had complained that his hugs and touching made them feel uncomfortable.

So, my question: is this how comebacks will happen? They’ll just sail by, covered by other band members, cast members, and corporate bureaucracy? Is it because these cases were never proven, or never as credible as other ones that these men just pick up where they left off? Does this prove that all the fussing men were doing about potentially ruined careers was all just so much male bluster and threatened privilege? Or is it a question of fame: the higher they were, the farther they fell, and the harder it will be to come back. Nick Carter, for example, always seemed a little close to the ground, so his fall was never going to be too serious.

Pahull Bains: I actually did NOT know about the accusation of rape against Nick Carter!!! But right off the bat I guess I should point out that… this has all totally happened before? Lets count the men who’ve done some–very publicly known–awful and even illegal things, and yet continued to work another day (or, you know, decade). Woody Allen, Roman Polanski, Mel Gibson, Chris Brown, R Kelly… Of all of them, Gibson’s probably the only one who pulled off a “comeback,” whereas the others were sort of steadily working right through, or soon after, their respective scandals. So I suppose the question is: why should this time be different? Or maybe even: should this time be different?

I know the world at large has been describing this moment in time in rather hyperbolic terms—watershed, sea change, reckoning—and perhaps we need to take a moment to step back for some perspective. Like I said, this has all happened before (the accusations, the outrage, the comebacks), albeit not in the heightened atmosphere of “a movement.” Things do seem different this time around though. Thanks to the current zeitgeist, we’re even re-litigating (in the court of public opinion, at least) some of those old high crimes and misdemeanours, most notably with Woody Allen and R Kelly. But the thing with both of them is: it’s the public, as a whole, that seems to be shunning them, even if the dudes who call the shots (aka the studios, the record labels, the production companies etc) seem happy to maintain the status quo. So what does it mean when a behemoth like Netflix not just welcomes Jeffrey Tambor but puts his name up for a major award? Is the corporate bureaucracy just testing us? Trying to see how far they can push us before the inevitable boycott hashtags sweep Twitter? The only thing that brought down Bill O’Reilly, after all, was advertisers pulling out from his show after being flooded with tweets, calls and emails. I can’t help but feel that these comebacks are going to be quietly, deftly attempted in various ways and with various men, just to see what the public pushback is. And in many cases, the public isn’t going to care. Or rather, is going to be too weary to care, too weary to summon their outrage for yet another cause. Like you said, some of the comebacks are going to sail by, and some aren’t, and I think the powers that be are willing to take a few gambles to see what works and what doesn’t.

GH: Have you seen Star Wars: The Last Jedi? One of the reasons some people didn’t like it–not counting the dudes who complained about the audacity of a woman daring to be the main character in a Star Wars movie, without wearing even one metal bikini–was because of the Canto Bight scene. You’ll recall that the entire subplot–where Finn and Rose try to find a code breaker so he can something something, it’s not important–ends in failure, and so some people felt that the movie was wasting their time. It’s a fair complaint, narratively speaking, but thematically, those characters had to fail in order to Learn an Important Lesson.

I wonder if this is an analogy for this moment. I think it’s possible to look at these accused men slowly coming back to prominence as a failure. Like, we thought we could fight the system, but the system is too powerful. Aside from the men who may be formally charged, inevitably all the others will find work again. But maybe it’s not a failure. Maybe the whole movement has at least taught people an Important Lesson.

But, can we really learn a lesson if there are no lasting repercussions? My one concern during all the allegations–and admittedly it wasn’t a pressing concern–was that there didn’t seem to be any path toward redemption. There was no way to change. It felt like any man who did something wrong was to be banished forever. And, to be fair, I can find articles that basically say just that.

The only problem is, we’re getting the final answers without seeing the work. Maybe these men deserve redemption because they learned their lesson, apologized to the victims, worked on themselves, all that good stuff. Or maybe they deserve their careers because they were innocent all along. Or, maybe they’re just benefitting from inertia and male privilege. We don’t know, and that’s frustrating. We do know that the conversation has changed, and that’s something. It feels like a loss, but maybe it’s not?

My only other observation about this: quality matters in journalism. One of the things that depressed me the most about Trump’s win was that it seemed to prove how impotent the media was. Basically every newspaper and magazine endorsed Clinton and roundly rejected Trump. The Atlantic endorsed a candidate for only the third time in its LONG history. And it made no difference. The Asshole won.

But with this movement, the better researched stories, the ones with the most detail and–not for nothing–the serious ones: the people at the centre of those stories seem to still be keeping quiet. At least for this week.

Should we–and by we I mean not me, because I’m, you know, a straight white man–define what winning looks like? Then we’d at least know how to feel when more men started coming back.

PB: Good question. But before I get into that, I just want to say that redemption is possible. BUT we’re sharp enough to sniff out the truly reformed cases from the ones that are just doing it to weasel their way back into the public’s good graces. Harvey Weinstein, for example, has been assaulting and abusing women for decades; he’s not going to be miraculously transformed overnight and we’d be silly to think he can. Someone like Dan Harmon, on the other hand, was thoughtful and introspective about a subordinate he chased and behaved poorly with for years, and it did genuinely seem like he’d seen the error of his ways. So there are Lessons being Learned, and they’re moving the conversation forward, which we both agree is only a positive thing. As time goes on, I think we’re all also getting better at understanding nuance and context; the defense of Aziz Ansari from various corners of the Internet is a good example of that.

Back to whether the learning of these lessons makes any difference at all: while I think it’s far too optimistic to think that the #MeToo awakening is going to bring about unwavering, unalterable change, it’s also defeatist to think that nothing has changed. Like I said, these comebacks have happened before, and they’re happening now, right before our very eyes. The main difference that I sense between then and now is that people are less willing to take shit. We want better of our celebrities, of our idols, of our colleagues, of our friends. And with the Internet, there’s a sort of strength in numbers; we can collectively demand better, and our combined voices carry real weight.

I think what winning looks like in the context of the long game of the #MeToo movement is an attempt, even if not always successful, at challenging the power of certain kinds of men in civil society and popular culture. Some might return, like you say, to their Patriarchal Thrones, and some might even find themselves in the White House (it’s STILL hard to believe) but at the very least, those thrones have been indelibly smeared, and the reality of their wrongdoings will follow them forever, no matter what. Lets face it: even if Charlie Rose comes back, no one’s going to ever look at him in quite the same way again. So while we might lose some battles, in the long run the war, I think, will still be won.