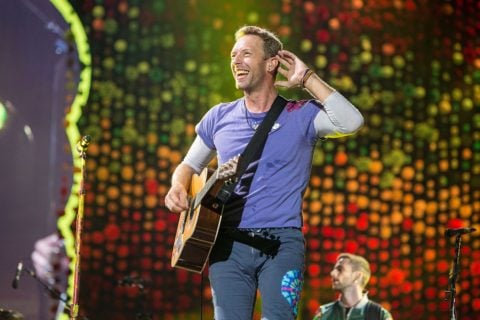 "All of us have to work out the best way of doing our job,” says lead singer Chris Martin.

Coldplay has delivered some stellar performances over the course of their 20-plus years together – like when they played in Toronto on the 2017 Head Full of Dreams Tour, where guests wore light-up wristbands in the open-dome Rogers Centre on a balmy summer night. However we may not get to repeat that epic night anytime soon as the band is putting touring on hold for a while. Ahead of the release of their new album, Everyday Life, tomorrow, Coldplay has announced they will not immediately be touring. Their reasoning? The negative impact concerts have on the environment.

The British rock band’s lead singer Chris Martin told BBC News that the band wants their future tours to have a positive impact. “We’re taking time over the next year or two, to work out how our tour can not only be sustainable, [but] how can it be actively beneficial.”

Concerts and music festivals alike generate a lot of waste. From the carbon emissions produced by transporting equipment and musicians, to the mass amount of single-use plastic water bottles, cups and straws discarded by fans, they are basically an environmental nightmare. A UK-based report on the music industry’s environmental impact suggests that live music in the UK alone fosters 405,000 tonnes of greenhouse-gas emissions each year.

“All of us have to work out the best way of doing our job,” Martin continued, nodding to the fact that artists carry a responsibility to share their music with the world in a way that isn’t destructive. The band has done many big tours in its two decades, and are now looking to “turn it around so it’s not so much taking as giving.”

This isn’t a new topic of discussion. The concern of music events’ impact on the environment has been addressed in the past by other artists such as Billie Eilish, the 1975 and Shawn Mendes. In fact, Mendes is working on making his 2019 North American tour more sustainable by swapping plastic water bottles with boxed water, offsetting carbon emissions, properly handling waste and more. Coldplay’s “dream” plan of action is using solar power and excluding single-use plastic at show venues to lessen environmental impact but as with any artist going on tour, their biggest challenge will be the carbon footprint produced from flying to each tour location.

But all this doesn’t mean they won’t perform in some capacity – tomorrow, when the album is released, Coldplay will perform their new songs at two shows in Amman, Jordan. To make it special, they have timed one show at sunrise and the other at sunset. This show will be streamed live on YouTube for all fans to enjoy. A second show in London, the band’s place of origin, will donate all proceeds to an environmental charity.