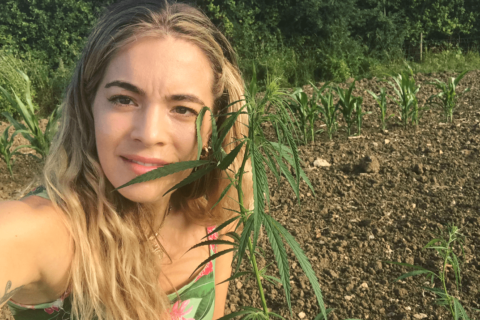 “Cannabis has in many ways saved my life,” says Chelsea Leyland. It’s the eve of Canada’s legalization, and the New York-based British DJ is in Toronto as 48North’s Guest of Honour. Her journey to this stage started 16 years ago, when she was diagnosed with Juvenile Myoclonic Epilepsy as a teen. “I not only struggled with a seizure disorder,” she says, “but also with an array of horrific side effects from the pharmaceutical medicines I was put on.”

When Chelsea introduced CBD oil into her health and wellness routine two years ago, the horrific side effects began to disappear. It’s a brave decision to ditch strong pharmaceutical anti-seizure medications for a substance shrouded in stigma, but Chelsea’s risk was met with reward: “I was fortunate enough to wean myself off of all my pharmaceutical drugs,” she says, “treating my seizures solely with cannabis.”

On @missgrass_ speaking on epilepsy and how using medical cannabis instead of pharmaceuticals has impacted my life.?

Now, Chelsea is using her story and her platform to advocate for the destigmatization of both epilepsy and medical cannabis. Just two years in, she says she’s seeing the veil of stigma slowly starting to lift. “There is a flood of anecdotal stories published in the media, and there is hard scientific evidence and data that is pushing these legislative changes forward. People are starting to understand this is a real medicine,” she says, “a medicine that is helping sick children and the likes with an array of conditions. The old stoner stereotypes from the Reefa Madness-era are slowly starting to shift.”

Chelsea has made shifting these perceptions part of her life work. She is currently producing a documentary called Separating the Strains about her and her sister’s epilepsy and how cannabis has played an important role in their day-to-day lives. This documentary is having a direct impact on the policy agenda in the UK.

Turning 30 and reaching one year off my medication….seizure free…and taking CBD only. I feel like a Cannabis queen & one lucky girl!! ??#cbd4epilepsy ? And thank you @gretaconstantine for the ?

But there’s one thing she wants to be clear about: Chelsea isn’t advocating marijuana as an all-purpose cure. “Although cannabis is a natural medicine, with very few side effects compared to most pharmaceutical drugs, it must still be considered like any medicine. This medicine will work for some and not for others.”