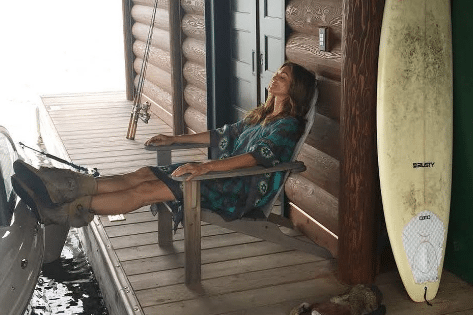 If there’s one thing we Canadians love most about the summer, it’s the weekends we spend at the cottage. Whether you’re with friends, family or on a solo retreat, submersing yourself in nature’s finest is the perfect getaway. It’s no wonder that celebrities have taken notice of what the Canadian cottage country has to offer.

Social followers of the Crawford/Gerber clan will know that the genetically blessed family loves their summers in Muskoka — and Cindy Crawford isn’t one to shy away from brag-sharing her perfect cottage life.

Crawford and her husband, Rande Gerber, built their cottage seven years ago. Today you can find her and her family paddle-boarding around their private island, mixing up “Watermelon ?  Mint ? Margaritas” on the dock, and picking up daisies at the farmer’s market.

When the light dances on the lake…

The lakeside views and laid-back lifestyle brings them back annually — and what inspired Vogue to feature their retreat back in 2015.

Late cottage breakfast for these two!

It’s a family affair: Cindy’s model children, 15-year-old Kaia Gerber and 18-year-old Presley Gerber, are also living their best cottage lives in Muskoka. The Crawford/Gerbers are also known to host other celebs, such as Harry Styles (!!!) and Lisa Rinna.

Wrapping a great weekend with the whole family! ❤️

But Cindy Crawford isn’t the only celeb to set up summer camp in Canada’s north. Next time you’re relaxing on the dock or walking the town, keep your eyes peeled — you never know which Muskoka loving celebrity you just might bump into. Here’s some of the people you should look out for:

Justin Bieber
Being from Canada, the hidden gem of Canada’s cottage country has always been known to the Biebs, so it’s no surprise that he owns property there. When not on his Purpose tour you can catch him on one of his many water toys on the lake.

Goldie Hawn & Kurt Russell
Being able to get away from the crazy antics of Hollywood is one of the reasons Canadian cottage country is becoming more popular for celebrities. Goldie Hawn and Kurt Russell are able to retreat to their lakeside cottage for the privacy that they need, with their own private bay. When they’re not on their picturesque property, Goldie is known to head to Gravenhurst for some shopping.

Kate Hudson
With her parents being such Muskoka regulars, it only makes sense that Kate makes an appearance from time to time. She’s been visiting every summer since she was 14 and stated in an interview how Ontario feels like her second home.

Tom Hanks
With much influence from friends Goldie Hawn and Kurt Russell, Tom Hanks is known to have property in the peaceful escape of Muskoka as well. The Oscar-winning actor is known to escape to his Lake Rosseau cottage in between filming.