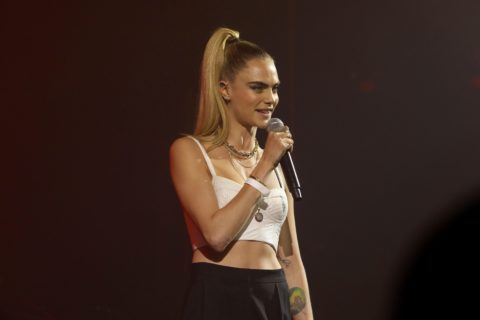 "In each episode of the show, Cara and a band of female accomplices will wreak havoc, executing a new stunt or practical joke."

Quibi, the mobile-only streaming service launching in April 2020, already has a roster of mega-celebrities attached to its name. The latest: Cara Delevingne. Currently starring on Amazon Prime Video’s Carnival Row alongside Orlando Bloom, the British model/actress’s next screen role will see her hosting a “practical joke series.”

According to an official release, “in each episode of the show, Cara and a band of female accomplices will wreak havoc, executing a new stunt or practical joke – ranging from the ridiculous to the extreme – often putting themselves in unwieldy and unpredictable situations in the process.”

For those still getting up to speed on Quibi, Vice explains that the service will offer “serialized dramas, comedies, thrillers, reality shows, and other programs, which you can watch on your phone in bite-sized chunks.” Each episode will be between seven to 10 minutes long (hence the name Quibi, which is short for “quick bites”) and will be available to view on mobile devices only. A slew of famous names have already signed on to develop/star in shows on the platform, including Chrissy Teigen, who is developing a Judge Judy-esque reality show called Chrissy’s Court; Guillermo del Toro, who is working on a “modern zombie story;” Jennifer Lopez, who is developing a pay-it-forward reality series called Thanks a Million, and Liam Hemsworth, who will star in an action-thriller series written by a Sopranos alum. (For a comprehensive list of projects currently under development, head to Entertainment Weekly.)

“I am so excited to be partnering with such a revolutionary streaming service like Quibi and cannot wait to unleash some necessary mischief,” Delevingne said in a statement. “As someone who watches so much content on my phone, this feels like such a perfect partnership.”

Playback Online reports that the platform will “produce around 125 pieces of content each week and about 7,000 a year following its launch in Canada and the US,” according to Quibi founder Jeffrey Katzenberg. Watch this space for more updates as we roll closer to the launch date.