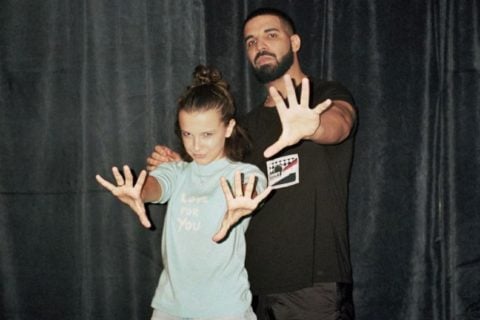 What is the web-o-sphere angry about this week? A celebrity friendship, a Marvel superhero’s face and a tone deaf sexy Halloween costume. Here’s everything you need to know.

THE STORY: On the Emmy’s red carpet, 14-year-old Stranger Things star Millie Bobby Brown chatted with Access Hollywood about her relationship with 31-year-old Toronto rapper, Drake.  “We just texted each other and he was like, ‘I miss you so much’ and I was like, ‘I miss you more!'” she said, before adding that Drake sometimes offers her boy advice.

Millie Bobby Brown is innocent and probably has crush, but Drake has no business texting her "I miss you so much"

when we found out drake, 31, is texting millie bobby brown, 14, talking bout "i miss you so much" pic.twitter.com/YkPdIdg4EK

RIGHTEOUSNESS OF THE RAGE: Out of context, I think this seems totally fine. When you remember that Drake is dating 18 year old Bella Harris, it makes his close friendship with Millie Bobby Brown a little less cute and a little more creepy. But hey, who are we to say? What do we really know? Brown took to Instagram on Thursday to vent her frustrations with the controversy that’s sparked on social media surrounding her and Drake’s texting. “Why u gotta make a lovely friendship ur headline?” she wrote. “U guys are weird… for real.”

She continued, “I’m lucky to have people in the business extend their time to help me further my career and offer their wisdom and guidance. I’m very blessed to have amazing people in my life. U don’t get to choose that for me. It’s nice to have people who understand what I do. Now get back to talking about real problems in this world other than my friendships… jeez.”

THE STORY: Good Morning America debuted of the first trailer for Brie Larson’s Captain Marvel this week, and it didn’t take long for Internet trolls to begin editing her face to fit more conventional ideals of femininity.

Someone legit edited #Captainmarvel face so she could “smile more” and ppl in the comments are saying this looks better.

This is fucking wild, no one did this to Thor or Captain America. Y’all don’t want women to have any agency. https://t.co/8CoxPlIqcw

I'm not RTing this asshole because it's what he wants. But it seems this dude's big issue with Captain Marvel is that the pretty lady won't just smile and look pretty like a good girl.#StopTellingCaptainMarvelToSmile pic.twitter.com/zxFCYxcUgJ

RIGHTEOUSNESS OF THE RAGE: At this point, Angry Men on the Internet™ are to be expected. Whether it’s Wonder Woman, Ghostbusters, Ocean’s 8 or Star Wars: The Force Awakens, these dudes just can’t stand to see a woman kicking ass, and bringing in the box office big bucks. Male privilege is a powerful drug, and it’s hella petty—especially from behind a computer screen. These sexist losers can try, but they will in no way tarnish Captain Marvel’s historic moment.

You can now buy a sexy Handmaid’s Tale costume

THE STORY: In anticipation of Halloween 2018, Yandy.com is selling a little red dress with a white bonnet, calling it the “Brace Red Maiden Costume.” The outfit,  which quite clearly resemble the uniforms worn by those in forced child-bearing servitude in Margaret Atwood’s The Handmaid’s Tale, are described on the site as: “An upsetting dystopian future has emerged where women no longer have a say. However, we say be bold and speak your mind in this exclusive Brace Red Maiden costume, featuring a red mini dress, a matching cloak with an attached hood, and a white bonnet headpiece. (Pantyhose not included.)”

Yes, this is what the handmaid's tale was missing – more leg https://t.co/7A6vI7Vpnd

I am honestly surprised it took until the 2nd season of Handmaid’s Tale for this to happen. Also, I am going to go away now. Probably forever. https://t.co/HuHL7PUdZP

RIGHTEOUSNESS OF THE RAGE: Appalling in its tone deafness… or genius in its irony? I almost like the idea of a Handmaid’s Tale spinoff that sees Offred & Co. taking back power, reclaiming their sexuality and stomping on the Gilead fascists in a pair of six-inch-heels. But I’m not entirely sure that this is the idea Yandy is selling for $64.95 — even if they claim it is. (After all, they have an entire “sexy Indian costume” section, which is a whole other level of problematic.) Here’s the apology that the brand offered after the backlash.

I wonder what Maggie thinks about all this.