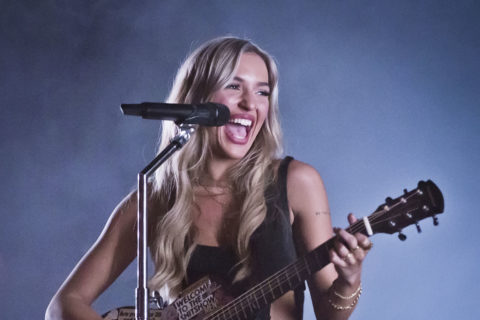 We caught up the Canadian star ahead of Sunday's ceremony.

Lennon Stella, the former Nashville star-turned-solo artist, is in New York when we call to chat to her ahead of flying into Canada for Sunday’s JUNO Awards. She is nominated for Single of the Year and Breakthrough Artist of the Year and her excitement at being recognized by her home country is palpable. “It’s the first time I’ve been part of any awards show and [the fact that] it’s in Canada and I’m going back to home base, it’s so cool. I love the Canadian-ness in that if you’re Canadian, there’s instant support and love. I think that’s such a beautiful thing.”

new crewneck sweatshirt up on my website now ? this may be my fav yet

Despite having moved to Nashville (the city) at the age of 9, Stella (who was born in Ontario) still very much embraces her Canadian roots. In fact, she says her favourite show to date happened in Toronto last year. “It was literally the most amazing thing,” she says of the show. “It was also my first time headlining a show on that level, plus all my family is out there, so it was very, very cool.” Again, she touches on the camaraderie of Canadians. “There’s just an immediate love in Canada that I think you feel when you’re Canadian. I mean I think everyone feels it no matter what because Canada is just the best but if you’re Canadian, they just take you under their wing and it feels very loving.”

Lennon is preparing to head out on tour from mid-May (with stops in Toronto, Vancouver, Montreal, Edmonton and Winnipeg), and her debut album Three. Two. One will be released at some point this year. The album “has been in the making for quite some time,” she says, “especially over the least two years.” Describing the release as “a long time coming”, she says that the finished product also helped her to feel complete. “I feel really good [about where the album is at] and it captures everything I want it to capture. Now that it’s finished, I feel very cohesive and finished which I’ve never really felt before and that’s a very exciting feeling.”

thank you guys so much for all the love this tour and all the love on Golf on TV. tickets are on sale now for my North American tour. I would absolutely love to see you there?link in bio

Switching gears to fashion (naturally), we ask if her tour style reflects that of her everyday look. “It’s pretty similar,” she explains. “It’s a little more elevated on stage because you want to feel a bit done up but it’s very similar to what I wear everyday. There’s lots of time where it will literally be the same outfit I’ve worn that day,” she laughs. As for her go-to brands, her sartorial heart belongs to the vintage racks. “I love vintage designers, like vintage Versace and vintage Chanel, really anything that’s vintage from a designer that I love. I never really buy new, I much prefer for it to be vintage.” Though if she does buy new, it’s pieces from Chrome Hearts. “I’ve been loving everything they’ve been doing.”

One flick through her Instagram and another skill of hers becomes immediately evident: the girl knows her way around makeup. “Thank you!” she says when I tell her so, and then, because I’m always curious as to what other people use in their routines, I ask which are her go-to products. “I love Dior’s AirFlash Spray Foundation. I use a NARS concealer, I love Charlotte Tilbury a lot, I’ve been using a little bit of BECCA, a Tom Ford primer – those are my go-to’s.” When she’s not on stage, Lennon says her normal day look is “Dior Airflash, followed by the Charlotte Tilbury translucent powder and then a blush of some sort, like NARS Orgasm. For the lip I always use the Charlotte Tilbury Lip Cheat in Iconic Nude, I love that one.”

As for what the year looks like beyond Sunday? “Touring, the album, and then doing festivals this summer,” she says, adding that she’s looking forward to being able to take some time to appreciate all the work she’s done and where she’s at right now. “I think that’s important.”

The JUNOs are happening on Sunday, March 15 in Saskatoon. You can catch the awards (and Lennon’s performance) live on CBC Music. You can also pre-order Three. Two. One by Lennon Stella here.

Photo by Frank Hoensch/Redferns
Get the best of FASHION in your inbox Thanks for signing up!
The latest fashion, beauty and celeb news delivered right to your email #FASHIONforall Now, check your inbox to complete your subscription
We won’t ever use your email address for anything else
Want even more FASHION? Follow us on social media.