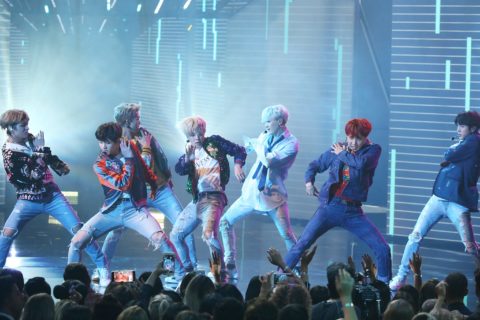 ARMY, the night has arrived: BTS made its much-hyped debut on American TV with a performance of their hit single “DNA” at last night’s AMAs. It was, was expected, everything a K-pop fan could have imagined. Although the boys didn’t take the stage until end of the night (way to keep the viewers waiting, ABC), they truly delivered from the moment The Chainsmokers introduced them. Hello, even Jared Leto had to catch his breath before he introduced Diana Ross to the stage to deliver the night’s final act.

But don’t worry, ARMY. Last night’s performance isn’t the last we’ll see or hear from the K-pop sensation. While in Los Angeles, the group made the rounds on American talk shows, Jimmy Kimmel Live!, The Late Late Show with James Corden and Ellen, which means they’ll be coming to our screens all week long. So BTS fans, stay tuned. In the meantime, let’s relive the highlights of their performance, shall we?

Here are four things we loved about the BTS performance (and one thing we wish we saw).

After coordinating in Saint Laurent black suits on the red carpet, BTS brought their coordination game (and glowing skin) to the stage. Clad in colourful Gucci bombers and jean combos, the boys brought the “DNA” music video to IRL, once again proving their A+ style game.

From the moment the first beat dropped, these boys were on point with their synchronized and intricate choreography. Way to show the world (and American/British boy bands) what being a K-pop group is all about.

BTS is no stranger to having cameras in their faces, especially when they are performing on stage. So when when the camera panned to the members during their individual solos, the boys did not disappoint by making eye contact and forever making our hearts swoon. Looking at you, Jimin.

If you are a loyal K-pop follower who religiously watches the live music shows (aka me!), you’ll know an essential part of live performance are the fan chants. No, we’re not talking about audience members singing along to the music. We’re talking about a meticulously planned out way of screaming the members names and verses without disrupting the singers’ performance. Although we couldn’t hear it in the televised version, luckily for YouTube, we were able to get a taste of it in an American venue here.

…but wish there was more BTS.

As much as their electrifying rendition of “DNA” gave us heart palpitations, we would have loved to see them perform a mash-up of their greatest hits rather than just one song (something ARMY has already seen on multiple comeback stages in South Korea). Seeing that this is their first televised performance in North America, how cool would it have been to show the world the evolution of their music in one go? There’s always a next time.

Photography by Michael Tran/FilmMagic
Get the best of FASHION in your inbox Thanks for signing up!
The latest fashion, beauty and celeb news delivered right to your email #FASHIONforall Now, check your inbox to complete your subscription
We won’t ever use your email address for anything else
Want even more FASHION? Follow us on social media.