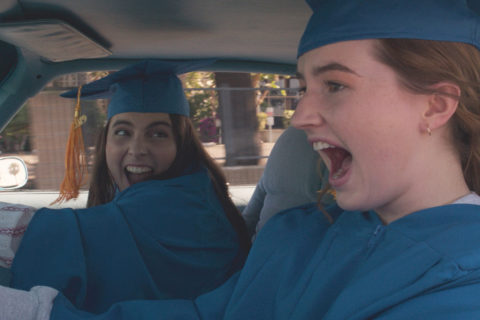 Booksmart’s Stars on Teen Movies, Timothée Chalamet, And Why Olivia Wilde is a Queen

We spoke to Beanie Feldstein and Kaitlyn Dever, the dynamic leads in Olivia Wilde's directorial debut.

It’s a familiar premise: two high school nerds, on the cusp of graduation, are desperate to have one wild night out. There’s a big party to get into. There are crushes to be met. There are things to be done. Familiar as those broad strokes might be, the specifics are anything but. For one, Beanie Feldstein and Kaitlyn Dever’s characters, Molly and Amy, aren’t the typical “nerd” types you see in movies in this genre. They’re smart, driven, well-adjusted, and couldn’t care less about what the “popular” kids think of them. But they’ve been so intent on doing everything right—from getting into their dream schools to figuring out their career paths—they realize they forgot to have fun along the way.

And so Booksmart follows the duo as they set about trying to cram four years’ worth of quintessential high school experiences into a single night. Needless to say, mistakes are made, boundaries are pushed and epiphanies are had. But the film never once strays into cliched territory nor does it rely on familiar tropes of high school cliques and tensions to drive its story. More importantly, the emotions and impulses of its female leads (one straight, one queer, another welcome deviation from the usual teen movie formula) are treated with enormous respect and understanding.

“It’s not a comedy that just takes jokes written for guys and [puts them] in the mouths of actresses,” first-time director Olivia Wilde tells The Frame. “Coz that happens a lot where it’s like ‘It’s a girl comedy! It’s so great they’re talking like guys!’ But that’s just not how women interact.”

Spotted: the cast of #BooksmartMovie taking our breath away at last night’s NYC Screening. In theaters THIS FRIDAY. Link in bio for tix! ? by @emiliomk

On the eve of the movie’s release, we caught up with its stars to chat about what makes Booksmart so special, their favourite onscreen BFFs, and more.

This movie is so different from other movies in its genre, where we typically see getting laid as being the big objective of the night, whereas for your characters it’s the experience of having a crazy night, and doing it together. In what ways did this movie feel different to you from other high school movies?

Kaitlyn Dever: I love that these girls aren’t trying to hook up… in any other movie it would have been like they were trying to get the guy at the end of the night.

Beanie Feldstein: They probably would have a fight over it.

KD: What’s so refreshing is these girls are so self-aware. They know how fun they are and how smart they are, and intelligent and so many other things. They just sort of want to prove that to everyone else, and also they’ve realized ‘wait a second, we could have done both and we haven’t and we should try to get on that tonight.’ I love that with my character—we don’t just mention that she’s queer and then don’t discuss it again. This is a girl who definitely has desires and wants an experience with someone and has just never had it and has no idea what that’s like. That’s very relatable, you know, to never have had an experience like that before.

I really like how matter-of-factly Amy’s queerness is depicted; her sexuality is given the same treatment as anyone else’s.

KD: Yeah, [typically] with a queer character, she would have been put in the movie to be the gay character, and we don’t really talk about it and we never explore her sexuality. Or there’s the other side of it where we would see the coming out story, and while that is a beautiful story and an important story to tell, we wanted to see what it was like after that. Olivia really didn’t want to put a spotlight on it because we don’t need to continue to do that anymore, that’s not what this generation is.

BF: Not only are these girls smart and dedicated and involved but they also have a deep and meaningful friendship. And I’d never seen, at the centre of a comedy, the story of two female best friends where one is straight and one is queer, and that never affects the relationship, it never comes into their friendship, they’re just like ‘i love you, go get ’em, go get that girl, go get that guy.’ And I also think, like… the only love scene in the film is a queer love scene which a) is so cool but also [the scene] is so deeply moving and funny and awkward and consent is involved in such a natural, easy way and that is a moment that anyone can relate to. But the fact that there’s universality to a queer moment is really, really radical. Bringing a straight audience and saying ‘you have to relate to us, we don’t have to relate to your story’ is really special, especially in this genre.

Speaking of this genre, did your brother [Jonah Hill] have any advice for you going into this movie?

BF: Well I take advice from him all the time, and he takes advice from me all the time. I think he was just really excited and proud, and the only thing he said was ‘hang out with Kaitlyn as much as possible.’ Because him and Michael [Cera] did that before they started shooting [Superbad], they spent every day together. We were talking about this at lunch, and were like ‘we have to spend every minute together’ and Olivia was like ‘well you could live together.’ So we ended up living together through all of rehearsals, even before the shooting, for like a month. So by the time we got to filming we were so genuinely connected that Molly and Amy just sort of sprung to life. It was amazing to layer them on top of our foundation.

Rolling with the homies. All the way to the theater because #BooksmartMovie is out everywhere Friday.

Had you guys met before you ended up on this project together?

KD: Ships in the night.

Well one thing you had in common is that you’d both done movies with Timothée Chalamet [Feldstein in Lady Bird and Dever in Beautiful Boy]. What was working with him like?

KD: I think he is one of the most talented actors of our generation. I’ve known him since I was like 16, we did another movie together and I knew immediately, I was like this kid, this kid’s got it. I don’t know what it is but he’s got it. He’s sooo talented.

KD: He’s here to stay and I knew it was going to happen, it was just a matter of time before everyone saw his genius. I really admire him a lot and he’s a good friend of mine.

KD: He’s like a Leo and a Daniel Day-Lewis all in one, but he’s like a new… he’s just Timothée Chalamet.

One thing I love about your characters, and it reminded me a lot of the dynamic between Abbi and Ilana in Broad City, is the way they’re always hyping each other up, talking each other up. In terms of onscreen friendships, what are some of your favourites that you love or loved growing up?

BF: Abbi and Ilana was a big one.

KD: Raven and Chelsea. Weird Science. They were boys but I loved that movie.

BF: That’s fine, Cory and Shawn in Boy Meets World was like my dream friendship, I was like ‘I AM Cory Matthews!’

Shout out to all the directors (female and otherwise) who know this feeling of deep, like WHOA, like, profoundly deep honor that an actor is trusting you with their vulnerability and imagination and body and heart. There are no words for the gratitude I feel. Love you @kaitlyndever and all my @booksmart fam. #filmmakerfriday

BF: Like working with a queen. She’s so remarkable. She sparkles. She is so confident and had so much energy, we were like ‘you’re a superhero.’ She’s a mom, she’s a producer, she’s an actor, she’s a director, she’s an activist. When does she sleep? No one will ever know. And she’s just so giving in the way that she directs, it was so deeply collaborative. She raised every human being on this film up. She just wanted them to shine.

KD: I loved how she treated everyone so singularly. She didn’t treat everyone as one big group and say ‘okay this is how I’m directing and this is my way.’ She always wanted our ideas, she always valued our opinions and wanted to bring all of our specificities into our characters and in turn it made this film more full-bodied because these characters were so great on page but then they just became more rich through this amazing collaboration that Olivia had with each individual person. I think that really shines on screen [similar to] movies like Fast Times at Ridgemont High—all of those characters are so specific and so different but they all fit together so well and I think that those kinds of movies are so iconic because there’s a person for everybody in that movie and if everyone was speaking the same or directed like one big group, it’d be a very different movie.

Beanie, it’s interesting that you’ve worked with not one but two first-time female directors, who are also actors, on movies about the high school experience. [Feldstein played Saoirse Ronan’s best friend in Lady Bird, directed by Greta Gerwig.]

What’s that been like for you, being a part of these milestone films?

BF: My female friendships are the most important to me in my life. I feel like there just can’t be too many stories about that because there are so few to begin with. The fact that I got to be part of two that are so deeply, deeply honest and so relatable and lived-in and full is one of the most emotional things that’s happened to me in the past five years. I can’t believe I was given that honour.

Photography Courtesy of Annapurna Pictures
Get the best of FASHION in your inbox Thanks for signing up!
The latest fashion, beauty and celeb news delivered right to your email #FASHIONforall Now, check your inbox to complete your subscription
We won’t ever use your email address for anything else
Want even more FASHION? Follow us on social media.