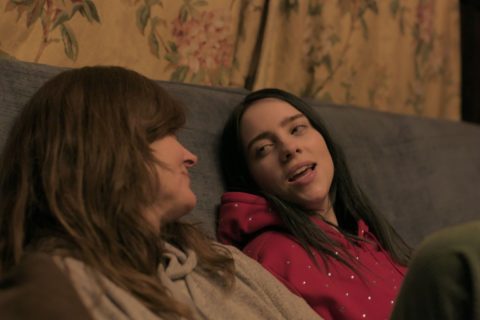 We spoke to director R.J. Cutler about the two years he spent with Billie Eilish filming ‘The World’s A Little Blurry’.

At just 13 years old, Billie Eilish recorded what went on to be her first big hit, “Ocean Eyes,” in her parents’ garage in Los Angeles. That’s where AppleTV+’s Billie Eilish: The World’s A Little Blurry (out February 26) begins — clips of home video with her now-producer brother Finneas O’Connell right before their worlds exploded.

Award-winning director R.J. Cutler didn’t know much about Eilish before they had their first hour-long meeting. “She’s a very real, very cool kid. That was my first impression meeting her in the backyard of her parents’ home in Highland Park,” he told FASHION in an interview.

Today, you’d be hard-pressed to find many Gen Z or millennial people who haven’t at least heard her name or can’t identify one of her many multi-platinum hit songs. Eilish is unwaveringlyt real. Her songs can be dark, sad and aggressive — but they reflect feelings that her huge fanbase can relate to.

“What intrigued me about her was the fact that she was clearly this extraordinary artist whose work so deeply touches so many people at such a young age, who is also a young woman coming of age,” Cutler said. “I was very intrigued at the possibility of telling a story that was both of those things at once.”

The two-and-a-half-hour documentary emphasizes the stark contradictions Eilish faces between her normal life with her very involved family, and the glamour and chaos of touring as a major celebrity and recording artist.

“I’m glad that you see that — that Billie is having a struggle with fame — because that’s consistent with what I observed,” he said. “It’s an important aspect of who she is and what she went through.”

Unlike some documentaries following celebrities that can end up watered down, sterilized or overly formulaic, The World’s A Little Blurry feels uncomfortably real. It’s sad watching a young woman burst into such an extreme level of fame while struggling with heartbreak, high expectations and an intense pressure to keep creating.

The film also gives fans a peek into her mental health. In one scene, she shows the pages of her journal from when she was little and struggling with depression and suicidal ideation.

The film wraps up after Eilish takes home five Grammy Awards at only 18 years old. It followed a lengthy world tour during which she struggled with trying to maintain relationships on the road while battling health issues. At times, she seems ready to give up — but light appears on the other side.

A final scene shows the singer driving her dream car, a matte black Dodge Challenger that, for her entire tour, sat unnused in front of her parent’s rustic home. A film that could’ve been simply a critique of young stardom — which it is, in many ways, intentional or not — provides a glimmer of hope that anything is possible.

“It’s a simple scene. Billie’s in the car, reflecting on where her life is. She thinks she’s kind of looking good, and she thinks she’s pretty famous. She’s getting along well with her family,” he explains.

“She thinks that life is good. That is kind of the whole journey of the movie.”

Watch a trailer for the film here:

The World’s A Little Blurry is now playing in select theatres and streaming globally on Apple TV+.