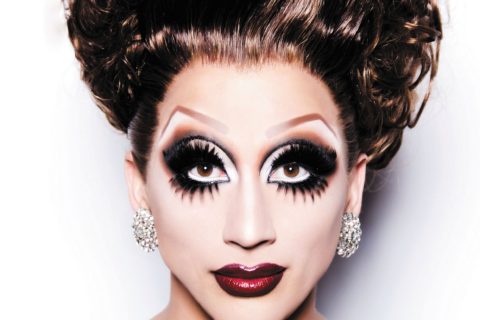 "Get rid of all the gay people that create movies and theatre, and do your hair, and decorate your weddings, and see how uplifting and exciting your life will be then."

Among the sickening ranks of RuPaul’s Drag Race winners, season six champion Bianca Del Rio is one of franchise’s most beloved fan favourites to date. During her season, she served classic high glamour on the runway, sure, but her true talent lay in her razor-sharp “reads” of her fellow competitors (drag scene slang for insulting someone)— and her dead-perfect Judge Judy impersonation. This comedy queen (a.k.a. costumer Roy Haylock, 42, of Los Angeles by way of New Orleans) has been working it hard since being crowned, touring several stand-up specials and starring in Hurricane Bianca and Hurricane Bianca 2: From Russia with Hate.

Want to experience a curated collection of her most cutting critiques? Now there is an entire book’s worth of hilarious Bianca burns and outright cruelty—seriously, you have been warned—in Blame It On Bianca Del Rio: The Expert on Nothing with an Opinion on Everything (Harper Collins Canada), out now. Bianca tackles questions submitted by real-life people as well as those she, uh, made up about everything from what to do about annoying stepkids and bad coworker breath to how to find your passion in life and boost your self-confidence.

“It’s quite fascinating just to see the foolishness that people write in to you,” Bianca says. Her goal? “I’m telling these people everything that they have not heard from their friends but that they need to hear from their friends.” But, she says, it’s important to remember: “if you’re a person asking a 42-year-old drag queen for advice, I think the problem lies with you.” Regardless, I had a big pile of life advice requests from me and my friends that I wanted her to weigh in on. Read on for Bianca’s brutally honest take on our most pressing problems:

My boyfriend keeps getting piss on the floor, despite my telling him to clean it up. How do I get him to clean up the damn pee?

It’s actually kind of gross, when you think about all that piss around the edges of the toilet. Take him in there, like a dog, and stick their nose in it, and say ‘don’t do this shit again!’ What you need to do is make it more of a game. You need to put a bullseye or something at the bottom of the toilet and ask him to try to hit that spot. And then, if he doesn’t really want to do that, at least you’ve got some new sexual adventures you can play with.

I have wild, messy hair, but sadly, lots of people don’t take us curly-haired gals seriously. Do I play it safe and straighten my mane, or let these wisps fly free?

Get a wig! It makes life so much easier! It’s one of those things—you just gotta do what you gotta do to make yourself look better. Don’t commit to straightening your hair, ‘cause you damage it; you can buy hair anywhere. You can buy hair on Amazon!

My neighbour blasts “It’s My Life” by Bon Jovi at maximum volume for an hour a day. How do I deal with this?

Well, you go ahead and play “This is My Life” by Shirley Bassey, and that’ll shut those assholes up.

I have a book project I’ve been working on, but it is really slow going. How do I motivate myself to get writing?

If you don’t want to write about it, nobody wants to read that shit! Make sure it’s an interesting topic, for christ’s sake! I didn’t want to even write about myself for my own book—I found that a little too egotistical—but “let me write some hateful advice to people”? That just flew off the pages! You have to make sure your topic is interesting. If you can’t get yourself writing, you’re really fucked. And no one’s gonna read it.

How do you deal with situations in which you are the only queer person in a space, and feel outnumbered, isolated, or tokenized?

I turn it into a party! I just become the most rudest, insane person there is, so they’re forced to have to deal with me. But I try not to put myself in those situations. Who the fuck wants to hang around with people like that? They’re usually boring, anyway. Those types of people are the ones that need drag queens and gay people around to make it seem somewhat interesting. And if they give you any shit, and they say, “you know, we just don’t like gay people,” well, fine—get rid of all the gay people that create movies and theatre, and do your hair, and decorate your weddings, and see how uplifting and exciting your life will be then.

I want to get into performing as a drag king. What makes a great drag king?

Everybody does drag for different reasons. You should sit down and go, “okay, what is really going to make this work? What is going to make this exciting?” For me, I’m attracted to wigs and makeup and the artistry of it, so to be a drag king seems kind of boring to me. Who wants to wear men’s clothes? Not me. But, I would say, know all your words and make sure you have a strong beard. And by “beard” I mean facial hair, not Tom Cruise’s wife.

I want to get into stand-up. How do you write material that skewers rather than supports toxic social convention and systems?

First of all: the words you chose to use in that question? It basically says that you’re an asshole. Write about what you know. It’s not that fucking literal, girl. It’s not science. Funny is funny. If you think something’s funny, I guarantee you, out of an audience, there’s going to be at least 10 people who find that amusing, or they can relate to it as well. That’s one of the keys to what I do; despite the fact that I’m the most fabricated individual you see, I’m probably the realest when you hear the shit I have to say. People automatically assume they have nothing in common with me, but then later on they realize we do have something in common: that we’re both common. Writing about something that you know makes the most sense. Don’t try to get all analytical about it. I mean, really—you heard that question. It’s horrible.

I care too much about what people think. How do I give less of a shit?

When they say or do something hateful, you just have to remember that they’re going to die. And it makes you feel much better. When someone pisses you off, just look at them and go, “but you’re going to die.” And then you move on.

How do I become more assertive?

Drink. Think of the shit you do when you’re drunk—you’re ballsy. You talk to people you wouldn’t talk to. You text that ex-boyfriend. If you’re drunk every day, that becomes your new lifestyle. Nothing wrong with that.

I love eating treats too much. How do I stop putting so much garbage in my face?

What the fuck: “treats”? Are you serious? What are you, a dog? You should eat what you want, but you need to balance it out. If you’re concerned about weight gain, then go to the gym, and eat ice cream on the fucking treadmill, if that makes sense. But overall, you need to figure out. What do you prefer better: being a fit individual, or just eating it and not giving two fucks? I mean, there’s a secret to it. Look at Oprah: she doesn’t care anymore. She eats her money!

Two of my friends have stopped responding to my texts to hang out. Should I keep trying, or give up?

My family treats me like shit. Am I obligated to keep them in my life, or can I kiss them goodbye forever?

Having your family in your face is highly overrated. You don’t need that bullshit. They’re perfect for weddings and funerals. You deal with them and then you go about your life. Like, when people tell me they talk to their mother every day—“we’re best friends!”—something’s fucking wrong with you. Your mother’s not your friend. She’s your mother, for christ’s sake. Your friend is someone hateful. Your friend is someone who would tell you you look fat. Your mother’s gonna go, “oh, but you’re my fat girl!” You don’t want that!

You’re a self-proclaimed expert on nothing, so maybe I should consult someone else. If you could ask anyone for advice, who would you turn to?

Oh, without a doubt, Judge Judy. She knows everything. She can fix the world in a half hour, with commercials. That bitch is my god. She should be President of the United States. If we’re going to have a reality star, it should be that bitch. Could you imagine her with the Supreme Court? Can you imagine her with Congress? Telling them that “she’s the boss, applesauce”? She could get shit done. I think she’s the best for advice, because every time I watch her show, I’ve never disagreed with her. EVER. I’m always like, ‘she’s right. She’s right.’ And that’s what we need: we need a strong woman like her.