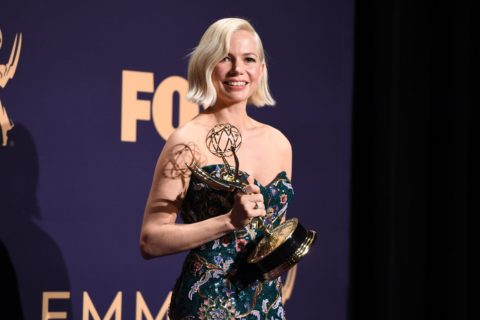 The 71st Emmy Awards took place at Los Angeles’ Microsoft Theatre last night and though there were some disappointing losses—Schitt’s Creek didn’t win in any of its four nominated categories—and joyous wins—Fleabag went home with six statues—the most memorable moments of the night were the acceptance speeches made by two actors who both made history in their respective categories and three actresses who spoke eloquently on pay equity, trans rights and taking chances. Here, the five best, most-talked-about speeches of the 2019 Emmys.

Michelle Williams
Delivering one of the most rousing speeches of the night, Fosse/Verdon’s Michelle Williams used her time onstage to highlight the importance of pay equity in the industry, considering women—and particularly women of colour—have long been egregiously underpaid for the demanding work they do. She also spoke about the importance of creating a safe, collaborative space in which to work, and for truly listening and paying attention to the needs of actresses on set.

“I see this as an acknowledgement of what is possible when a woman is trusted to discern her own needs, feel safe enough to voice them, and respected enough that they’ll be heard,” she said. “When I asked for more dance lessons I heard ‘Yes,’ more voice lessons, ‘Yes,’ a different wig, a pair of fake teeth not made out of rubber, ‘Yes.’ And all of these things, they require effort and they cost more money, but my bosses never presumed to know better than I did about what I needed in order to do my job and honour Gwen Verdon. And so I want to say thank you so much to FX and to Fox 21 Studios for supporting me completely and for paying me equally, because they understood that when you put value into a person, it empowers that person to get in touch with their own inherent value and then where do they put that value? They put it into their work. And so the next time a woman, and especially a woman of colour—because she stands to make 52 cents on the dollar compared to her white male counterpart—tells you what she needs in order to do her job, listen to her, believe her. Because one day she might stand in front of you and say thank you for allowing her to succeed because of her workplace environment, and not in spite of it.”

Patricia Arquette
Patricia Arquette is no stranger to viral speeches. In 2015 she spoke about wage equality at the Golden Globes, and last night after winning an Emmy for her work in The Act, she advocated for trans rights, speaking movingly about her sister Alexis, who passed away in September 2016 of cardiac arrest as a result of complications from HIV. Alexis was an actor and transgender activist who transitioned in the early 2000s.

“I just have to say I’m grateful to be working. I’m grateful at 50 to be getting the best parts of my life and that’s great. But in my heart, I’m so sad I lost my sister Alexis and that trans people are still being persecuted. I’m in mourning, Alexis, and I will be the rest of my life for you until we change the world, until trans people are not persecuted. And give them jobs, They’re human beings, let’s give them jobs, let’s get rid of this bias that we have everywhere.”

Billy Porter
Making history as the first openly gay black man to win an Emmy for Outstanding Lead Actor in a Drama Series, Billy Porter took to the stage in a glorious sequinned suit and delivered one of the most moving and impassioned speeches of the evening. As the star of Pose, whose cast is largely made up of LGBTQ+ actors, Porter spoke on behalf of minorities everywhere, quoting James Baldwin from a 1960 essay:

“’It took many years of vomiting up all the filth that I had been taught about myself, and halfway believed, before I could walk around this Earth like I had the right to be here’,” he quoted, adding, “I have the right, you have the right, we all have the right!”

It must be noted that with this win, Porter is just one Oscar away from earning an EGOT, which would land him in an exclusive club with only 15 other members—a rare group of people who have each won an Emmy, Grammy, Tony AND an Oscar.

Alex Borstein
Alex Borstein may have begun her acceptance speech for Outstanding Supporting Actress in a Comedy Series (for The Marvelous Mrs Maisel) with a joke about bra and underwear, but it quickly took a turn for the serious when she mentioned her grandmother, a Holocaust survivor, and “the strength of a woman.”

Jharrel Jerome
At 21, the When They See Us actor became the younger person in history to take home the Outstanding Lead Actor in a Limited Series or Movie award. The Bronx native was up against veterans of the industry—Mahershala Ali, Benicio del Toro, Sam Rockwell, Hugh Grant and Jared Harris—and seemed completely dazed to be the one taking home the statuette that night. Korey Wise, the real-life person Jerome portrayed on screen, was in tears immediately, as he and many others in the Microsoft Theatre leaped to their feet. After dedicating his award to his family, his team and the series’ director, Ava DuVernay, he said, “But most importantly, this is for the men that we know as the Exonerated Five. For Raymond, Yusef, Antron, Kevin and King Korey Wise!” The five men he named were wrongfully charged—as young boys—with the brutal rape of a woman in Central Park in the 1980s. Known then as the Central Park Five, they were exonerated 13 years later, earning themselves a new moniker.

Photo credit should read ROBYN BECK/AFP/Getty Images
Get the best of FASHION in your inbox Thanks for signing up!
The latest fashion, beauty and celeb news delivered right to your email #FASHIONforall Now, check your inbox to complete your subscription
We won’t ever use your email address for anything else
Want even more FASHION? Follow us on social media.